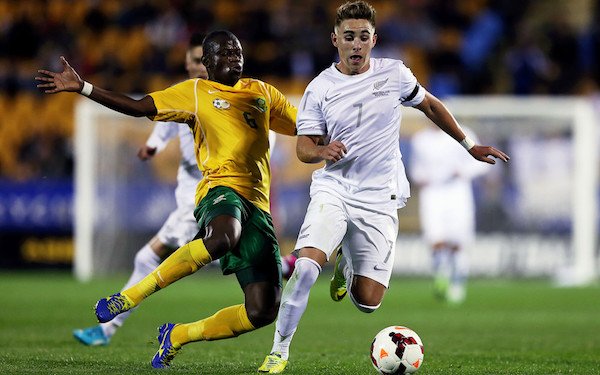 Tyler Boyd, who has had an outstanding half-season at Turkish Super Lig club Ankaragucu, has had his request for a one-time switch of association from New Zealand to the USA approved by FIFA.

The move likely means that the 24-year-old Boyd will be called up for the 2019 Gold Cup.

Boyd was born in New Zealand to an American mother and New Zealander father and then lived in Santa Ynez, California, until returning to New Zealand when he was 10.

Boyd played for Wellington Phoenix, the lone New Zealand-based team in Australia's A-league team, until he was transferred to Portugal's Vitoria Guimaraes in 2015. But he never settled in at Vitoria Guimaraes, playing mostly for its second team in his first two seasons in Portugal.

Boyd played for New Zealand at the 2013 Under-20 World Cup and in three senior friendlies in 2014 (photo) but didn't play for the All Whites in Oceania qualifying for the 2018 World Cup -- which would have prevented him from playing for the USA.

The USA's best winger is Christian Pulisic, but he has been used as a No. 10 so far under new head coach Gregg Berhalter

The U.S. U-20s, who play their first game at the Under-20 World Cup in Poland on Friday, have exciting young wingers like Tim Weah, Konrad de la Fuente and Uly Llanez, but the senior national team is not so loaded at the wing positions -- vital to Berhalter's system -- that Boyd isn't an attractive option.

The USA has started Paul Arriola and Corey Baird on the wings in three of the four international matches under Berhalter and Jeremy Ebobisse and Jordan Morris once apiece.