In sports, one fan's hero is another fan's object of derision and contempt. Successful players on a rival team may illicit begrudging admiration, at best, but there are few things more difficult to stomach than the open floodgates of adulation for world class players who have channeled all their talents into a team you decry. I'm thinking in particular of Franck Ribéry and Arjen Robben, both of whom rounded off their storied league careers at the weekend with Bayern Munich by coming on as subs to score in front of an adoring home crowd. Bayern hammered Eintracht Frankfurt 5-1 to lift their seventh successive Bundesliga shield. 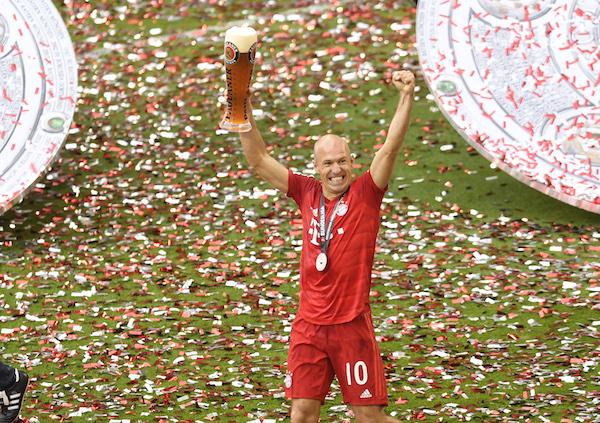 There are plenty of good things to be said about both players. I'm not going to regurgitate their impressive stats and list of honors -- you can look them up in a digital second. Also worthy of praise is the fact they've stayed loyal to one club for the past decade, quite unusual in an era when stars are often moved on by their agents in the name of making even more cash. They have also fought multiple injuries and then returned to the field in the same scintillating form they showed in their younger days. Ribéry also experienced a hard-scrabble childhood that prompts admiration of his subsequent achievements.

The pair have excelled as out-and-out wingers some decades after such players went out of fashion. Any young player learning the art of wing play should study videos of Robben cutting inside his defender, executing seventeen different kinds of feint. I'm sure there's a long highlight reel somewhere of his trademark, curling left foot-shots into the top corner of the opposing goal.

Yet I don't like them, and I won't miss them. It's nothing to do with their off-field antics, which in Ribéry's case are well-documented. It is worth mentioning, though, that he is strongly disliked in his native France for his lead role in inciting his international teammates to strike at the 2010 World Cup in South Africa. I'll also be happy that I never again have to skip through a fawning interview with Robben in the German sports paper kicker, which pretty much consists of the question, "Arjen, you are so amazing. Can you tell us more about that?"

What stops me from whistling in awe at Ribéry and Robben, in the way that I might do with Lionel Messi, Eden Hazard or Kevin de Bruyne, is not even the feeling that they've been playing for a club that is a bully in its own league. That Ribéry in particular might have been more ambitious in his choice of team, perhaps in a league where the fullbacks were harder to beat .(Robben played for both Chelsea and Real Madrid before joining Bayern in 2009.)

No, what really irks me is that the way they conduct themselves on the field is detrimental to their talents. Ribéry is notorious for throwing an elbow at opponents and at often getting away with it -- either through having done it surreptitiously, or through the lenience of referees punishing this violent conduct with a mere yellow card (most famously in the 2013 Champions League final against his future teammate Robert Lewandowski, when he escaped with a mere verbal warning). Robben, meanwhile, has a reputation for something else that's very hard to overlook -- throughout his career he's been prone to falling over in the penalty area with intent to deceive.

The only time I ever saw Robben play live was in late 2015, when he came with Bayern to Frankfurt on a Friday night. Bayern had won all of its first 10 league games, but on this evening couldn't breach the Eintracht defense. Shortly before the end, Robben threw himself to the ground in the Frankfurt penalty area and received a yellow card for simulation. The game ended 0-0, and his action summed up the spoiled attitude of players used to winning every week. I don't understand why sportsmen blessed with so much talent feel the need to cheat. When they later watch the repeat slow-motion replays of themselves diving for a penalty, or elbowing a fellow professional, why don't they feel so ashamed that they vow never to repeat the sin? Their transgressions are not just counter to the morals of sporting behavior, but seem as unnecessary as a best-selling songwriter ripping off somebody else's tune, or an acclaimed writer stooping to plagiarism.

I frankly don't care what players do off the field, as long as it doesn't damage anyone beside themselves. However, when they conduct themselves during games in the way that Ribéry and Robben have done throughout their careers, I'm happy to see them go. They may have been great players, but they were very poor sportsmen. All the medals, goals, crosses and stepovers will never disguise that these were two professionals of mediocre character.