The FA Cup: A Good Idea that became a Fairy Tale and then a Horror Story

Manchester City has won the FA Cup. With a resounding 6-0 wipe-out of Watford.

Well, bully for Man City. Celebrations, whoopees and huzzahs resound throughout the world of soccer. This proves, I gather, that Man City is a truly great  team, maybe even the greatest ever. If not quite that, then the greatest ever to play in the English league.

Possibly that is so. Certainly Man City has played some wonderful soccer during this season. I’ve enjoyed watching them. But I did not enjoy watching this damn cup final.

We hear so much, far too much, about the glamour and the wonderful democracy of the cup competition, the romance of the little clubs fighting it out against the big names, even occasionally, beating them.

In particular, all that is supposedly best in the Cup and its gala atmosphere is alleged to be on display at Wembley on Cup final day. Miraculously, the weather usually joins in, and sunshine reigns. The bands play, the fans are in festive mood, they sing, gawd knows why, “Abide with Me” (a dreary devotional dirge), someone from the royal family (never known for having the slightest interest in the sport) turns up, the grass glows radiant green and we get a helluva game -- not least because winning the FA Cup is important, it means something.

At least, that is the way it used to be. But times have changed, society, fashions, customs, usages too. Fings ain’t wot they useter be, as the cockneys would have it.

The first FA Cup final was played in 1872. Heck, Queen Victoria was on the throne (no record that she ever turned up at a Cup final), Sherlock Holmes had yet to appear in print, there was no Coca-Cola, the Wright Brothers were still earthbound, television was over 50 years in the future. You bet, things have changed.

Yet the FA Cup goes on as though that French phrase Plus ca change ... -- the more things change, the more they remain the same -- is literally true.

Which explains how the FA Cup, originally a bright idea, morphed slowly into a fetching fairy tale, and has now sunk to the level of a horror story.

And it was a horror story that I watched this past weekend. I mentioned all the shouts of praise for Man City. I might have some doubts about all that hullabaloo. City beat six opponents in the FA Cup: Rotherham United, Burnley, Newport County, Swansea City, Brighton & Hove Albion, and Watford. Not a particularly impressive list of tough opponents (one fourth division team, two from the second division, and two from the bottom third of the Premier League).

Anyway, the betting is that not much celebrating has been heard in Watford. Because Watford was not just defeated, it was utterly humiliated in a gross mismatch.

OK -- mismatches are expected in the FA Cup, they’re a large part of the fun. But traditionally they involve lower-division teams against top-division teams and they usually occur before the final, before the grand gala, showcase day.

Watford is not a lower-division team. It is in the Premier League in which it finished a respectable 11th. Yet it was destroyed by Man City.

Which is what I mean by a horror story. What possible enjoyment can any fan (other than those of Man City, and not all of them I suspect) get from seeing Watford put to the sword to such an embarrassing extent?

How did that happen? It happened -- and something similar is likely to occur again -- because the Cup promoters, to say nothing of the usual assembly of mindless marketeers, have failed to notice that the financial gap between top-level and lower-level teams now resembles an abyss. This is not just between different divisions -- the abyss exists within the Premier League.

There are, let us say, six EPL teams that qualify as rich teams. They’re different -- yes, they have more money, but they also have rosters that include a goodly proportion of outstanding, highly paid players -- players who are not first-team regulars. 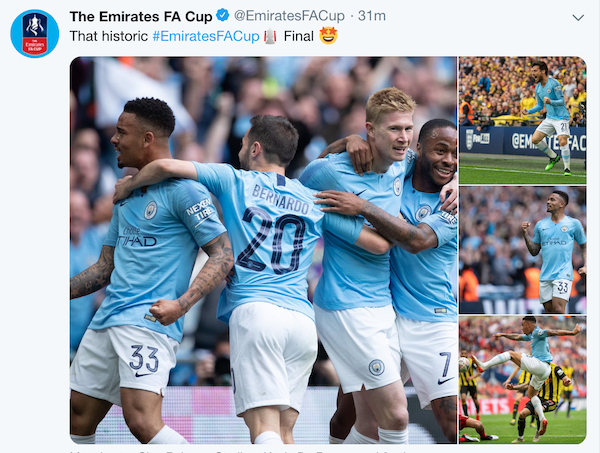 They can field reserve teams that are as good as -- or better than -- most EPL first teams. Manchester City took the field against Watford with Leroy Sane, Kevin de Bruyne and Sergio Aguero on the bench. Sane and De Bruyne got into the game late. Aguero wasn’t used at all.

What is one to make of that? It can be read as -- and surely looks like -- a snub of Watford, a message that a sub-strength Man City is good enough to take care of Watford. An insult, then, before the game has even started.

You may be able to find less objectionable reasons for Man City resting its stars (though remember that this was Man City’s final competitive game of the season). But a team that believes (correctly) that it is greatly superior to its opponent faces an insoluble problem if it doesn’t want to come over as obnoxiously arrogant. As the game progressed, as the Man City goals mounted up -- in effect, as the score was getting much larger than it needed to be -- what was Man City supposed to do?

Go light on Watford by simply passing the ball harmlessly around, and not trying to score? At 4-0, in the 68th minute, the game was obviously over. But for Man City to decide that it would then deliberately avoid scoring (and who would make that decision?) would have subjected Watford to 25 minutes or so of insulting mockery.

The alternative, to keep hammering Watford, held only the appeal that it was clearly the less patronizing approach. So Man City turned the screw on Watford’s humiliation and made it 6-0. You have to go back to 1903 -- one hundred and sixteen years ago -- for the only previous 6-0 cup final scoreline.

Which made the 2019 final a farce. But much worse, the 2019 final was a distressing, sad and sorry affair. I felt, deeply, for Watford. They didn’t deserve that.

But I’m hearing the argument that Watford asked for it, that they should have played much more cautiously and defensively. Maybe. So that is what the FA Cup structure now encourages -- negative play in the grand final?

Possibly it does. But we also know that, whatever its structure, the FA Cup is an outdated model. It is not a priority for the big rich teams, who may put out sub-strength teams. It may well be a nuisance that simply gets in the way of what really matters these days -- making sure you play in the UEFA Champions League next season.

That of course is a money decision. There may be ways of returning the FA Cup to its former importance, but I cannot think of anything foolproof. So I suppose all the sales talk about the “glamour of the cup” will continue, even though that glamour has just been brutally exposed as a pitiless trap for lesser teams.

england
4 comments about "The FA Cup: A Good Idea that became a Fairy Tale and then a Horror Story".
Read more comments >
Next story loading