Soccer in the USA has always had English and Scottish influences. In the 20th century, South and Central American influence was inevitable. Today, many U.S. coaches have immersed themselves in Spanish soccer. In MLS academies, coaching education is now deeply steeped in the influence of the country that won the 1998 and 2018 World Cups and has a reasonable chance of holding the men's and women's titles at the same time. French coach Fred Lipka has moved from a consulting role to a full-time position with the league, where he runs the comprehensive Elite Formation Coaching License (EFCL) course. 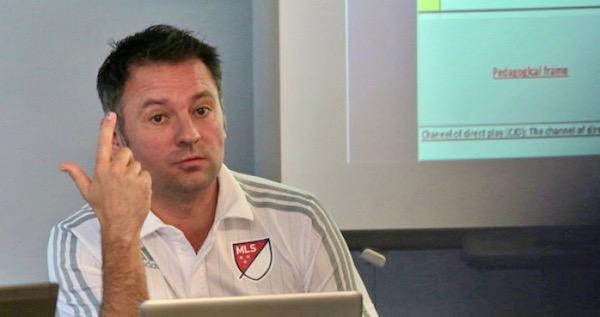 Fred Lipka is the MLS Technical Director of Youth Development.

SOCCER AMERICA: Can you describe your role with MLS?

It was the coaching education first. Now I’m also overseeing all the projects around the competitions and speaking to how we are going to improve our processes and our strategy around young players and young professionals in our academy, and also when we sign them as professionals.

It’s a work in progress -- very broad and very exciting as well.

SA: You’re not imposing a specific curriculum on coaches who take your program. What sort of things do you teach them?

Now it’s not only technique or tactics, but we talk about also emotional aspects and physical aspects. The fifth parameter I would include is the social aspect. These are completely integrated and not studied in silos. The most important aspect is not to teach how to do a drill but how to integrate these main parameters in the training process and in the week.

The most important thing also is how to teach 1,000 specific cues of the game. If you don’t understand the game at the highest level, you cannot teach the game for the high-level prospect. We talk about making decisions and to discriminate among thousands of parameters and to pick the right one.

So how to read and how to teach the specific cues is crucial in this program. It's more how to transmit the knowledge of the high-level game and how to transfer it on the field than only to teach how to do a drill.

SA: You mentioned the emotional and social aspects. Was this something you were working on in France before you came here, or is this also new to you?

LIPKA: We made the switch, I would say almost 10 years ago when we had some kind of bad experience on and off field.

We think the tactical and technical aspect always has to be linked. So it's not teaching technique only and tactic only. I think it must be connected. You can have someone who is perfectly technical and able to execute but not able to decide, to have the right tactical intention. That's why teaching both at the same time is very important.

And sometimes it’s an emotion. The emotion of the game when you play against big teams or against a strong opponent -- the emotion is too much to make the right call. We try also to raise this point. Playing against a weak team or average team doesn’t give you the same environment and context as when you play a big team, when you know you will only have one opportunity to score a goal.

When you have 10 opportunities to score a goal, it’s easy to make a decision because you know you will have another one. When you have only one opportunity to win the World Cup or to win an important game, it's not the same decision. So the amount of pressure is not exactly the same.

The level of competition also allows you to have successes and also failures, and to develop the player with this level of emotional pressure.

SA: What has changed in your four years on the job?

LIPKA: Oh, a lot of things. We are not where we were five years ago. The first time I came to the U.S. was 2012. MLS clubs in general have made a lot of progress. We still have a lot of progress to make. It’s night and day in terms of club environment but also mentality and also awareness of what we can deliver.

SA: Was it a shock to come here from France and see so many different organizations with authority over youth soccer in this country?

LIPKA: Yes, it’s a shock because French academies were mandated in the '80s, so we have 50 years of background. We have so much successes and failures, it’s incredible. It’s a drastic change but very exciting. We think the (USA) is in bad shape in terms of grassroots and number of players which play the game, but I can see a lot of passion and a lot of hope and lot of positive trends when I travel around the country. I would say yes, it’s a big change. I would say I can see a lot of challenges, but more importantly, I see the opportunity.

SA: How would you evaluate programs outside of MLS? What are some things that you see that maybe one organization is doing right? U.S. Club Soccer has its La Liga methodology. U.S. Youth Soccer is more open -- they don't really have a specific ideology for their clubs. Do you see benefits in having both approaches in the United States?

LIPKA: I would say everyone wants to do well, first. All of those organizations want to do what they think is the best. I want to develop the U.S. expertise. I want develop our coaches to be able to be leaders and to be able to incarnate the future of this country.

I don’t want to blame anybody, but I think those organizations we talk about are looking for more expertise, more leadership to improve what we are to improve. What you don’t know is difficult to understand. Now in MLS environments and maybe tomorrow in other organizations, we have more people to understand what we really need.

We don’t understand what means “performance,” only results. A result is important, but as I said, the result has to validate a way to train, a methodology, a style of play. A result is only part of the iceberg. Underneath, you have everything you’re going to do during the week. You can lose a game in the right way. If you worked well, it's going to be positive for the kids, for each individual player and also for the team. The way of playing, the capacity to kick the ball, the capacity to do transitions, to defend your goal in the right way, winning the ball in the final third -- I see a lot of things to evaluate different parts of performance than only the result.

And all the coaches should be evaluated in a different way -- not only the result but what they can bring to the soccer community and to the kids.

SA: Where would you see youth development in the USA in five years?

LIPKA: In five years, I think it will be completely different. I think we will see a lot of young MLS players playing, I hope, in MLS, as we can notice now this year. They will populate more of our teams, and they will be transferred overseas as well. That's only the beginning of this story.

LIPKA: Yes, we have also a national champion. But the academy director and all of my colleagues in Europe, I hope, are not mainly evaluated in winning a championship. They are evaluated in their capacity to bring kids into the first team and to make them available to perform maybe three, five, six years, and also because we need the resources, to sell them. So never were my coaches, when I was a technical director, evaluated on their ability to win the championship. It's something that happens when you do a good job.

If I am Dallas, I am L.A., I am Seattle, I am Red Bulls, NYC -- winning is going to happen. I would be more focused on how many players they are going to deliver to the first team and to be able to perform in MLS. That should be the ultimate goal. Now, learning to win when you are 15, 16, 17, 19 is a part of your growth, but it should be natural for kids to have this will. It’s not the ultimate goal for a club to create this winning culture, but it should be something natural.

I think a winning culture is more how you create it in your weekly environment in your club, and each time the players step up on the field, it should be present. I don’t believe in a winning culture only the day of the games, the competition.

I think France is one of the favorites of the next World Cup. I think they are going to do well.