Christian Pulisic stops off at Stamford Bridge on the way home 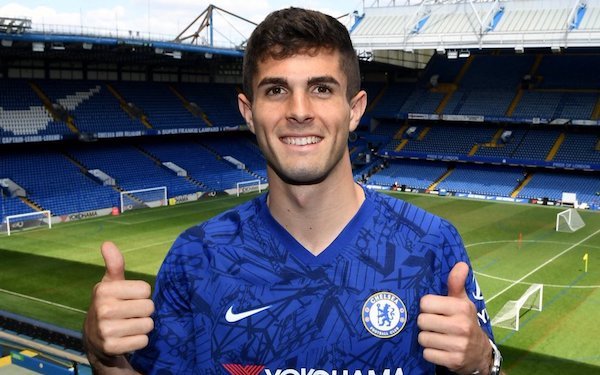 Three days after his fifth and final season in Germany ended, Christian Pulisic was in London on Tuesday to be introduced as the newest player at Chelsea before he headed off for a short break before he joins the U.S. national team in training for a pair of pre-Gold Cup matches.

It was Pulisic's first trip to Stamford Bridge since he visited the Chelsea stadium with his father, Mark, when he was 8 years old and they spent a year living in England while his mother, Kelley, taught on a Fulbright Scholarship.

"Initially, I was a little bit confused and wondered why my family was going to England," he told BBC Sport. "I didn't really want to leave home. But I soon realized how much people over here loved the game. To be in that culture and get thrown right in just grew my passion even more. Every day after school, I was on the court playing."

He remembers watching Didier Drogba and Frank Lampard and thinks Drogba scored a penalty kick, but the experience definitely inspired him to dream of returning and playing in the Premier League."

“I always wanted to play professionally, especially in Europe," he told the Chelsea Web site. "And the Premier League was what I was able to watch growing up in the U.S., and it is always where I wanted to be."

Pulisic said the challenge of breaking through at Borussia Dortmund makes him think he can succeed at Chelsea.

"I was 15 when I moved to Dortmund," he said. "It was something I always wanted and it was just a matter of finding the right time. Now, I just felt that it was the right step [to join Chelsea]. It was a great time in Dortmund, but it was a feeling and I still have that."

Pulisic has inevitably been compared to Chelsea star Eden Hazard, who is rumored to be headed to Real Madrid this summer.

‘Eden is a fantastic player," Pulisic said. "We all know that and if I can get anywhere close to that I will be happy. He is a great player. I want to come in and be my own player, and do the best that I can do."

Pulisic was used as an attacking midfielder in his first two U.S. games of the year under new head coach Gregg Berhalter, but he said he can be very effective on either of the wings.

"I had the chance to play on both at Dortmund," he said, "but I have experience of playing as a No. 10 with the national team as well. Really, any of the attacking positions I can be comfortable in. I was most comfortable on the wings at Dortmund."