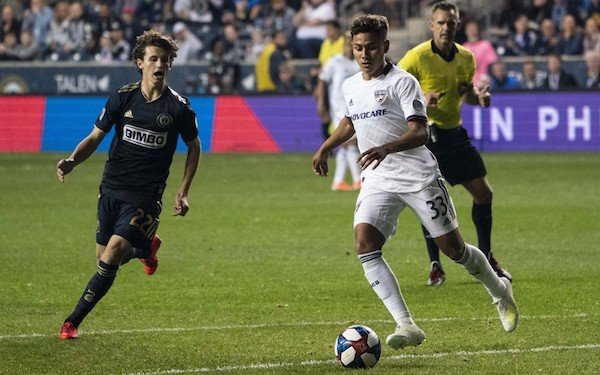 On the eve of the USA's first game at the Under-20 World Cup, there's been a lot skepticism about the hype surrounding Tab Ramos’ U-20s.

I can start by saying I’ve been following the U-20 program for almost four decades  -- I saw my first U-20 game when the USA beat El Salvador, 2-0, in 1980 Concacaf qualifying in Princeton — and never seen any team close to what Ramos has assembled in Poland.

Like his previous teams, the current U-20s have been shaped in Ramos' image, aggressive, attacking and risk-taking. The other teams tried and failed, like the 2013 team, or hit a wall, like the teams in 2015 and 2017 and exited in the quarterfinals.

How far the 2019 U-20s go in Poland is irrelevant. They are so much farther along in terms of their pro careers than anyone could have imagined even five years ago that they have already succeeded.

Go down the list of players and their current clubs, and the USA matches up with just about any U-20 team in Poland.

The U-20s have had a player from Ajax before -- John O'Brien on the 1997 U-20s -- but never a collection of players from Ajax, Barcelona, Bayern Munich, PSG (on loan to Celtic) and PSV all at the same time, plus others from an assortment of Bundesliga clubs like FC Cologne, Freiburg, Hannover 96 and Wolfsburg,

What most of the players have in common is that they came up through MLS academies, specifically MLS academies with residential programs, and from an early age they had one thing in mind and that's to be a professional soccer player. A lot of kids dream of being pros but don't or can't take the steps of achieving that dream. Now it's possible.

Edwin Cerrillo was 10 or 11 when he started hanging out with his father and playing in an adult league in Waco, Texas. A few years later, Cerrillo was seen by an FC Dallas coach and got invited to an under-15 tryout. It just happened to coincide with a planned family trip to Florida. His parents were split about what to do. His mother said he could always try out later; his father told him to go for it.

Cerrillo stayed behind to attend the tryout and it was successful. It meant moving from Waco to Frisco, two hours away. "Thankfully, that tryout turned out to be life changing," Cerrillo told Brian Sciaretta of American Soccer Now.

Sebastian Soto also came from a soccer-playing family. His father, Fabrizio, starred at Chapman University in the mid-1980s and his uncle, Eddie Soto, was an All-American at Cal State Fullerton and is now the U.S. beach soccer national team coach.

When he was 15, Sebastian Soto was recruited by then-RSL academy director Martin Vazquez to move from Carlsbad, north of San Diego, to Casa Grande, Arizona, where RSL's residential program was then located, five hours away.

The same thing happened to goalkeeper David Ochoa. He was 15 and playing for FC Brea from Fullerton, California, when he went to Mexico. He attended Mexico national youth team camps in Mexico City but FIFA regulations prevented him from registering with Guadalajara, so he entered the RSL program in Casa Grande.

For years, U.S. Soccer's U-17 Residency Program was the pathway for ambitious young Americans, but the Bradenton net caught an artificially small number of players and didn't account players who had late growth spurts or were late-bloomers.

Soto had already developed an array of soccer skills so that when he finally sprouted he suddenly had all the tools to become a scoring machine in the USSDA: 42 goals in 29 games for RSL in 2017-18. Cerrillo only tried out for the FC Dallas after a tryout at another Dallas club, the Texans, was unsuccessful. Alex Mendez, the star of the USA's U-20 World Cup qualifying campaign, barely played his first season after he entered the LA Galaxy's high school program as a U-16 player.

"He was the kind of guy," Galaxy II coach Mike Munoz told SA's Arlo Moore-Bloom, "that because he went through such a difficult year, he was mentally strong enough to get through it and kept working harder and harder than everyone."

The Bradenton program was folded after the 2016-17 academic year, but the current U-20s all grew up when the program was still around. Critically, just two U-20s in Poland went to Bradenton as residents as other pathways opened.

MLS academies produced 17 of the 21 players on the U-20s, and 13 of them came from four clubs offering residential programs -- FC Dallas, the LA Galaxy, Philadelphia Union and Real Salt Lake.  Many but not all moved away from home at a young age and had to make a lot of sacrifices or were surrounded by other players who did.

Whether they knew it at the time, they all became keenly aware of -- and realistic about -- what it took to succeed, giving them a maturity that serves them -- and those close to them -- well as they continue to move up the ladder.

This pathway is being replicated by others coming up. Danny Leyva and Gianluca Busio, both Best XI picks for the USA at the recent Concacaf U-17 Championship, left Las Vegas for the Seattle Sounders and Greensboro, North Carolina, for Sporting Kansas City, respectively, and signed MLS contracts when they were 15.

The lowering of territorial restrictions will reduce artificial boundaries. But more than that, these success stories will spur other MLS clubs to follow suit and introduce their own residential programs for kids with the talent, determination and smarts to achieve their dreams.