Refs improve in a meritocracy

It's the closing seconds of a tied basketball game and a timeout has been called. Sweat is pouring down the faces of the players as they stand around their coach holding a clipboard.

So I wonder why some assignors in soccer refereeing are giving games to the first refs who respond to them rather than their best refs. Refereeing has always struggled to be a meritocracy, defined as an elite group of people whose progress is based on ability and talent (rather than on class privilege or wealth) or a system in which such persons are rewarded and advanced. An example of the second definition is “The dean believes the educational system should be a meritocracy.” The third and last definition of meritocracy is leadership by able and talented persons.

With the soccer ref shortage across the United States, assignors often have to find every warm body so they can cover all the games. In this space, I’ve written that the best refs are the ones who receive assignments on light weekends when there are very few games scheduled. Lately, I have found this not to necessarily be true as too many assignors have decided to assign games on light weekends or when they have a turnback for a game in a few days not by contacting the best official available but by sending out an e-mail to all officials and assigning based on a “first-come, first-serve” basis. So refs are receiving extra games based on whether they are on their smart phone or computer and not based on their ability. 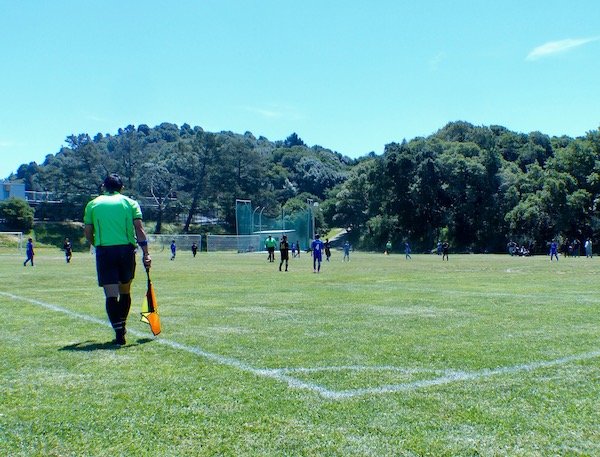 My teenage cousin was playing in a game on a light weekend and he had a goal disallowed during a 2-0 loss for a foul he committed. I wasn’t there so I’ll assume the decision was correct but my father was at the game and he reported the ref was quite chubby and resided inside the kickoff circle and went with the AR’s flag on the foul to disallow the goal since the ref was 40 yards away. As the ref did not run the field, the assignment should have been given to a fit referee instead on that light weekend.

Now for good, young refs, they are spotted by the referee leadership and they have incentive to improve so they can make the pros one day. But the great majority of soccer refs in the United States are not good enough or young enough to be on anybody’s radar and are happy to ref youth soccer. So if assignments on light weekends are not always going to the best officials, what incentive do most have to improve other than their own personal pride in doing a good job?

It’s not the money. As a ref improves, they will go from being assigned mainly young kids’ games to the older kids’ games. A U-19 game pays a ref generally double that of an U-10 game yet a U-19 game takes 90 minutes to play and an U-10 game is 50 minutes long. So the ref is being paid just a little more per minute in the U-19 game.

Many of the best youth soccer refs leave officiating club games altogether and they go where the money is by reffing high school and college soccer and spend weekends the rest of the year with their families. I am not criticizing this approach as working a full-time job and then reffing on weekends throughout the year can be a real problem as the ref is seemingly never home and is a major reason why, by doing the same, I’ve never been married.

Going back to my original point, if assignors distribute games equally, there is absolutely no incentive for most refs to improve.