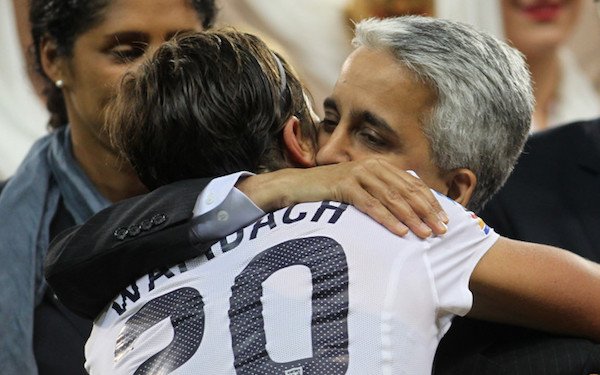 Abby Wambach, who holds the world record for international goals with 184, and Sunil Gulati, U.S. Soccer president for three terms (2006-2018), were elected to the National Soccer Hall of Fame on the first ballot.

They will be inducted at the National Soccer Hall of Fame in Frisco, Texas, on Sept. 21.

What a moment....and you knew it was bound to happen! @JulieFoudy just surprised @AbbyWambach to let her know she will be inducted in the National Soccer Hall of Fame in September.


Gulati, 59, was born in India but moved to Connecticut, where his father was earning a PhD in mathematics, at age 5. He became involved in organizing soccer teams when he was a teenager and soon became involved in the ODP program, which was the pathway to the modest national team program that existed in the early 1980s.

Gulati was largely responsible for the men's and women's national team programs taking off in the late 1980s. He served as deputy commissioner of Major League Soccer (1995-99), overseeing the acquisition of international stars and national team players who stocked the league's first 10 teams, and was instrumental in U.S. Soccer backing the launch of the National Women's Soccer League in 2013 after two previous women's leagues failed.

Gulati, a senior lecturer in economics at Columbia University, chose not to seek re-election for a fourth and final term as U.S. Soccer president in 2018. He remains a member of the FIFA Council, having served on FIFA's highest executive body since his election to the FIFA executive committee in 2013.

Congratulations to former @USSoccer President @SunilGulati who’ll be inducted in the Hall of Fame on Sept. 21.

US Soccer President @CACSoccer & CEO Dan Flynn surprised Sunil at a Board of Directors meeting this morning.https://t.co/E2nGQJOOWQ pic.twitter.com/taGdRg2buh