In its final tune-up game before heading to France, the USA beat Mexico, which failed to qualify the World Cup, 3-0. A sloppy first half by the Americans produced one goal, thanks much to the Mexican goalkeeper's blunder. Carli Lloyd, one of five subs to start in the second half, created the second goal, a tap-in by Mallory Pugh in the 76th minute. Christen Press' 88th-minute goal provided a rare bit of brilliance from Coach Jill Ellis' team, which must be concerned about how ineffective its attack has been in the early phases of recent games. 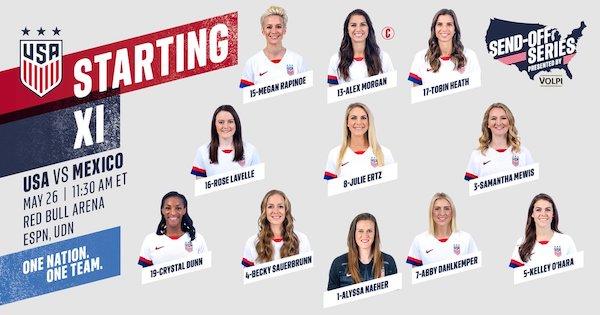 Alyssa Naeher was called into action once, when she punched clear a 50th-minute cross. It was the third straight game, after wins over New Zealand (5-0) and South Africa (3-0), in which the U.S. keeper hasn't been seriously tested.

Certainly against a Mexican team that showed no intention to attack, the U.S. defenders could have been much bolder coming forward. The best was left back Crystal Dunn, who sparked an early attack with a pass to Mewis, but Dunn's real first foray came midway through the first half. She managed a 43rd-minute header to Mexican goalkeeper Cecilia Santiago and a volley easily saved just before the halftime whistle. The central defense duo of Abby Dahlkemper and Becky Sauerbrunn spent most the game as spectators. Right back Kelley O'Hara supported Rose Lavelle and Tobin Heath.

Sam Mewis may have played herself out of a chance to start at the World Cup. Shortly after kickoff, she mis-hit a pass that would have served up a golden chance for Tobin Heath. She slammed a third-minute shot into a Mexican defender, mis-played a pass intended for Alex Morgan in the 10th minute, and coughed the ball under moderate pressure. Julie Ertz hit a couple decent cross-field passes before moving to the backline in the second half, when she helped set up both U.S. goals. The first with a pass out of the back to Carli Lloyd and the second after she moved forward and fed Christen Press. Rose Lavelle's 28th-minute shot went straight to the keeper.

Good thing Tobin Heath finished after Santiago gifted her the ball at the edge of the penalty. Heath, who juked past defender Rebeca Bernal before stroking home, started the game with a volley that nearly went out for a throw-in and a couple poor crosses. And she missed badly from eight yards in the 33rd minute. Alex Morgan had a game to forget, missing with her left foot from six yards in the 26th minute and shooting straight to Santiago on a breakaway six minutes later. Rapinoe, who set up both Morgan chances, took a shot that actually did go out for a throw-in and skied a free kick.

Five U.S. players came in at halftime against a Mexican team that made no changes until 63rd minute, but the fresh legs didn't alter much for the USA until later in the second half, when the second goal finally came. After receiving a pass from Ertz along the left sideline, Carli Lloyd roasted Bernal and sent the ball rolling along the goal line, where Mallory Pugh prevented a clearance. Pugh struggled in one-on-ones but besides helping the ball cross the line on the USA's second goal, delivered the pass that Ertz relayed to Christen Press on the final goal. Press' strike from 18 yards, after faking out Arianna Romero, was the brightest moment for a U.S. team that heads to France after three games in which its defense has been insufficiently tested and its offense looking below world-class efficiency.