Desperately needing a win after opening the U-20 World Cup with a 2-1 loss to Ukraine, the USA on Monday faced Nigeria, which opened with a 4-0 victory over Qatar. As it did against the Ukrainians, the USA took command from the opening whistle, and against Nigeria enjoyed a 60% edge in possession in the first half. But this time Coach Tab Ramos' team took a 1-0 lead into halftime, extended its lead before the Nigerians touched the ball in the second half, and defended tenaciously against a fast and powerful opponent to claim a 2-0 victory. On Thursday, the USA faces Qatar, which fell, 1-0, to Ukraine. 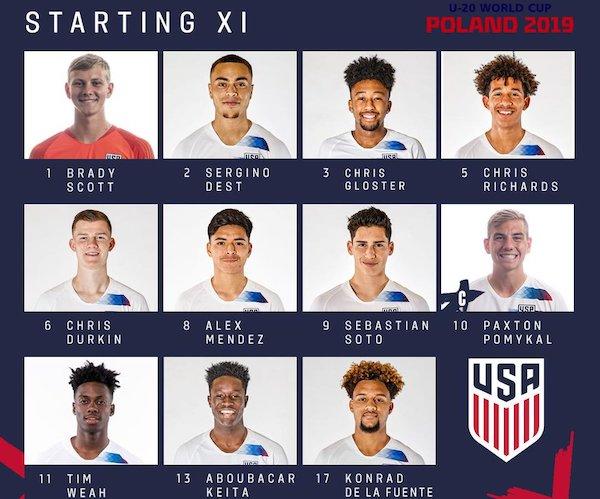 Brady Scott made good saves on shots from Zulkifilu Rabiu and Aniekeme Okon, and was well positioned for Nigeria's long-range blasts. He fisted away a few dangerous crosses and istributed well, including a few times with his feet under pressure after back passes. He survived misjudging a stoppage-time corner kick.

U.S. outside backs Sergino Dest and Chris Gloster played like midfielders when the USA had the ball, helping keep the Nigerians on their heels for much of the match, while also fulfilling their defensive duties. Gloster, after dribbling from the halfway line, assisted on Sebastian Soto's second goal. Chris Richards won several headers and tackles before being subbed because of injury in the 60th minute. Richards and central back partner Aboubacar Keita won their battles with strikers Akor Adams and Okechukwu.

The ball-winning of Chris Durkin, the central midfielder who covered acres of the field, was key to preventing the Flying Eagles from finding midfield rhythm. Durkin also passed smartly, such as when he found Alex Mendez in the 21st minute and Mendez delivered a precise through-ball for Tim Weah's shot that keeper Olawale Oremade saved well. On the opening goal by Soto, Mendez drove in the kind of corner kick, with hardly any arch, that is particularly had to defend against. Mendez, whose deflected shot in the 16th minute hit the crossbar, slowed down after taking a blow to the head and was subbed in the 77th minute. Paxton Pomykal passed precisely under pressure and also helped break up Nigerian counterattacks.

Center forward Sebastian Soto, the one newcomer to the U.S. starting lineup after the Ukraine game (replacing Brandon Servania), scored both goals with sharp finishing. The skillful, swift dribblers Tim Weah and Konrad De La Fuente kept the pressure on Nigeria from both wings. Weah, who passed the ball to Gloster on the second-goal sequence, was offside by a foot when his header set up a called-back shot into the net by Soto in the 30th minute, and nearly scored in the 21st minute. De La Fuente's cross to Soto in the ninth minute created the first big U.S. chance and one of the eight U.S. corner kicks.


Minutes after replacing the injured Richards, Mark McKenzie clumsily knocked down Michael for a penalty kick call -- and got lucky that VAR spotted an offside before the foul. Brandon Servania and Justin Rennicks helped the USA keep the Nigerians at bay when it was playing with a man-advantage for a five-minute stretch late in the game while Soto was treated on the sideline. 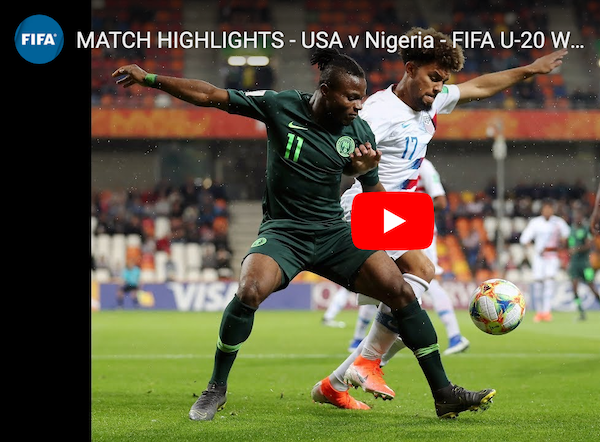 TRIVIA. Curt Onalfo, an assistant coach to Tab Ramos at this tournament, started for the USA the last time it faced Nigeria at a U-20 World Cup. It was a 2-1 Nigeria win in overtime in the semifinals of the 1989 U-20 World Cup in Saudi Arabia, where the USA placed fourth, still its best finish at the tournament.