What happened to Atlanta's sparkle? 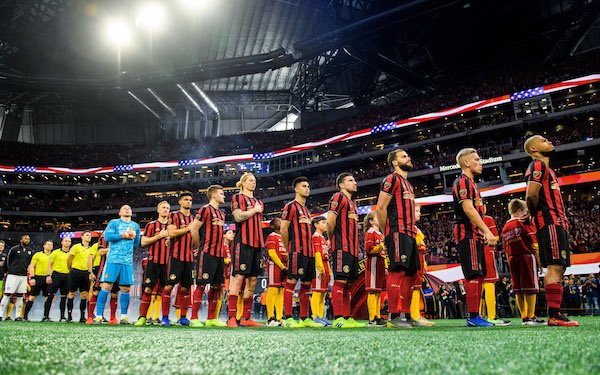 I expected an attractive, skillful game, and that’s what I usually got. Which is asking quite a lot in these days of defensive formations and defense-dominated attitudes.

But there was more. Atlanta United’s soccer was fun. Superstar (and he was certainly that) Miguel Almiron did a lot of smiling, as did Coach Tata Martinez. And Josef Martinez had plenty to smile about as he broke the league’s season-scoring record.

I’m still watching Atlanta games, but the dynamic soccer has all but vanished. Taking with it the sheer enjoyment that bristled from those games. Last season, Atlanta games were special.

For me, Atlanta-2018, was the best-ever team in MLS. The fall from those heights has been rapid, calamitous ... and deeply saddening. It has taken less than half a season for Atlanta to shrink and shrivel into a rather ordinary team. The joyous vibes of delectable soccer have been replaced by ... well, replaced by what?

Could it be that we are now being asked to admire Atlanta as a defensive team? The MLS website seems to think so, telling us recently “Atlanta United break MLS consecutive shutout wins record.”

A story that contained not the slightest awareness that to hail Atlanta for its shutouts marked a massive denial of everything that made Atlanta so outstanding last year. In 39 MLS games last year, Atlanta had 10 shutouts. No big deal -- who was talking about them, anyway? All the excitement, what mattered, was happening at the other end of the field.

Counting shutouts -- and boasting about them -- is something that lesser teams do. Defensive teams, negative teams, as miserly as Scrooge, equally unattractive. You can be absolutely certain that when a team makes a big deal of its shutout stats, the soccer will be lousy.

Atlanta’s soccer is not lousy, but it is often boring, a far cry from the exuberant event that it was just a year ago. What has gone wrong? The departure of both Almiron and Tata Martinez has proved a severe blow -- one that has been compounded by bringing in totally unsuitable replacements. I had my say about the hiring of Frank de Boer some months back. Very definitely not the man for the job. Pity Martinez, ostensibly the man to replace Almiron, was another mistake, for Martinez is a very different sort of player.

Blaming de Boer for not being Tata Martinez, and Pity Martinez for not being Almiron gets us nowhere. Or rather it leads us to the Atlanta bosses, the ones who approved the appointments. To make two such damaging signings hints pretty clearly at a basic misunderstanding. It suggests that the Atlanta hierarchy simply did not understand what it had last year. That it failed to grasp that the key to the team’s sparkle, and hence its winning ways, was its Latin American core.

I can think of no other explanation for the choice of de Boer, a coach with no experience of the Latin game. But how much experience of the Latin game did the Atlanta bosses have? Not enough to recognize that Pity Martinez could never be a strict replacement for Almiron. That was a trickier decision, but even so one wonders just how the more cerebral cleverness of Pity Martinez was supposed to have the same effect, never mind the same fan appeal, as Almiron’s spectacular, even flashy brilliance.

Atlanta has lost its guiding light in Tata Martinez, it has lost the sprightly, mischievous-but-menacing, presence of Almiron on the field. I do not find it reassuring to read stories singing the praises of Jeff Larentowicz (not at all sprightly and not particularly skillful).

Nor was I impressed when de Boer praised Darlington Nagbe as his “No 10.” Back in the 1950s the English had a term for players like Nagbe -- “utility players” -- they were good but not outstanding, and greatly useful in those pre-substitution days because they could play, competently, several different positions. They have disappeared now that substitutes are allowed. Frankly, a team that seems to allot key roles to the likes of Larentowicz and Nagbe (to say nothing of the flaky Brad Guzan) looks like a team in trouble. Meanwhile, Josef Martinez, last season’s prolific scorer has trouble finding the net, and both Pity Martinez and Ezequiel Barco fail to show the star-quality they surely have.

Another report on the MLS website talked of the Atlanta players coming “to understand what the Dutchman [de Boer] was asking of them.” Odd. De Boer has taken over a club coming off one of the most successful-ever seasons of any MLS team. A situation that hardly calls for change. If there’s any learning to be done, it should be De Boer doing it.

But De Boer’s lack of familiarity with the Latin style is a formidable obstacle. Brian Fernandez, the Argentine who has just joined Portland, recently commented on his quick adjustment, praising the fellow-Argentines on the club: “It’s very important to have players like Diego Valeri and Sebastian Blanco ... for me, I consider myself a fast player so it’s easier for me to find the spaces knowing I have players like Valeri and Blanco backing me up.”

There is a lovely hint there of the subtleties and nuances of the interplay of the Latin game. When it’s there, as Fernandez has found it in Portland, things go well. But when a coach is “asking” something different of South American players, the intricacies and the instincts of the Latin game are likely to get crushed.

I’m hoping that the Atlanta bosses appreciate that. If they do, but still persist with de Boer, then we shall know that they don’t consider the Latin touch all that important. Or that they never knew they had it. Either way, the tedious technicalities of a Dutch theorist will have won out over the spontaneous creativity of the Latin game. And Atlanta will become just another MLS team.

Not a consummation devoutly to be wished, so I shall continue my Atlanta watch hoping that the diminishing flame of Atlanta-2018 can be rekindled.