Tommy Wilson on the Philadelphia Union's youth movement, the USL, the DA, and his Scottish-USA connection

Tommy Wilson  arrived from Scotland in 2013 to become the Philadelphia Union’s Academy Director. Six years later, the Union has six Homegrown players on its first team roster, including 18-year-old midfielder Brenden Aaronson, who has made 12 appearances (11 starts) in 2019. 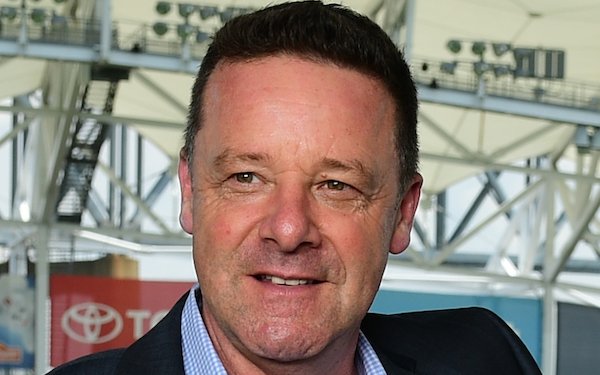 TOMMY WILSON: He played in the Academy as a 13-year-old. Chris Brewer, who was our 14s coach at the time, reminds me that when we played Red Bull in a 1-1 draw, Brenden played, as did Mark McKenzie, Anthony Fontana and Matthew Real. For Red Bull, Tyler Adams, Tim Weah and Omir Fernandez played.

I remember that game. Brenden was really small and slight. I was fearful for him in that game, but he had the fearless mentality even back then. And that's helped him survive.

Only occasionally did Aaronson, now 5-foot-10, play up an age group.

TOMMY WILSON: You have to be careful how you handle that with a player. We had Brenden playing up, but not too often. When he was on our under-18 team, he was ready to play with our USL team.

The 2015 launch of the Philadelphia Union-affiliated USL team Bethlehem Steel has provided a stepping stone for young players to the first team.

TOMMY WILSON: I felt when I came at first there was a bit of a glass ceiling between the under-18/19s and the first team. Having the USL team helps that transition. It makes it much smoother.

Before arriving in Philadelphia, Wilson served as Glasgow Rangers Academy Director and reserve team coach, during an era when Americans Carlos Bocanegra, Maurice Edu, DaMarcus Beasley and Alejandro Bedoya (now with the Union) had stints with Rangers. Wilson’s arrival coincided with the Union’s ambitions to create a world-class youth development program.

TOMMY WILSON: I think we are way ahead of where I thought we would be. We were well-supported, well-resourced, but to have as many Homegrown players in and around our first team as early as this has surprised me. That takes a lot of foresight. It takes a lot of belief. It takes a coach [Jim Curtin] who is prepared to play the young players.

When I came, we had three teams in the Academy. We had three kids in our school. We maybe had seven or eight staff. We've now got seven teams. We have a USL team. I've got 18 in my staff in the academy. There are 14 teachers in the school. The USL team has five or six staff. We now have an infrastructure that will help advance and accelerate the development of our talent. We have a scouting network across the country that we didn't have when I arrived, and we have our own training fields. 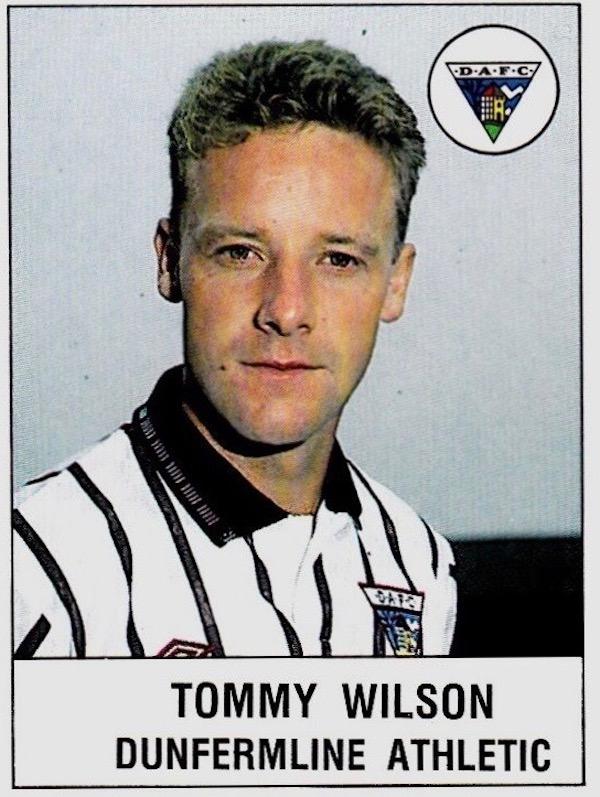 From age 16 to 20, Wilson played for Glasgow's Queen’s Park FC, Scotland's oldest club, while in an engineering apprentice with American tractor company Caterpillar that included college studies. "When I was 20, I had qualified as an engineer and could have left to get a degree in engineering or become a professional soccer player. I decided to become a pro," he said. "I was a planning engineer, and that has helped me in my career as I try to plan and plot out the development path for our young players." After Queen’s Park FC, Wilson played for Dunfermline, Hearts, Kilmarnock and St. Mirren, with which he won a Scottish Cup. Early in his playing career, American Pieter Lehrer, now head coach of Harvard, was a trialist in Scotland and suggested Wilson spend his offseason in the USA. He worked at Hubert Vogelsinger's camps and continued making regular visits to the USA. "Hubert used me as a demo player," Wilson said. "I quite enjoyed my trips to the USA and made a lot contacts. I knew Bobby Clark from Scotland and met him in the USA, and it opened a lot of doors for me."  Clark, the former Scottish national goalkeeper and Aberdeen legend, coached at Dartmouth, where one of his players was Richie Graham, who would become part of the Philadelphia Union ownership group. When Wilson served as Scotland youth national team coach, it lost the 2006 U-19 European Championship, 2-1, against a Spain team that included Juan Mata and Gerard Pique. "I was really fortunate when I was coaching the U-19s. I worked with Archie Gemmill, who played for Brian Clough's teams at Derby and Nottingham Forest, which won two European Cups," Wilson said. "Archie was a big influence on me when I took to coaching."

TOMMY WILSON: I’ve been very fortunate and been afforded to travel extensively through my work -- and I haven’t seen a school like this one. They're able to train in the morning. Our USL team Bethlehem Steel trains at lunch time, so for players who attend our school there's a flexibility in their education that ensures they don’t miss out on their education when training with the reserve team or the first team.

About 20 players, from areas in Pennsylvania too far for commuting, and as far away as Florida, Michigan and California, are in the Union’s residency. If, as expected, MLS eliminates “Homegrown territories,” which gives MLS teams rights to youth players only from designated areas, the Union will be in good position to attract even more talent.

TOMMY WILSON: I consider the USA to be a continent. The residency part is critical. We have a school. We have residency. We have a structure in place. We have a player welfare staff. We have people in place to look after the boys. We make it a home away home.

Generally, the Union waits until players are 15 or so to consider them for residency.

TOMMY WILSON: Normally it’s around 15 because that's an age when a boy can leave home. And an age where there's less guess-work because he's through his growth spurt, but we treat each case on its own. We've had younger ones at residency, but not too many.

How The Union makes decisions on signing young players to pro contracts.

TOMMY WILSON: We a have process. We have Richie Graham, part of the ownership, Jim Curtin, first-team coach, myself, Chris Albright, who's a technical director. Brendan Burke, who is the USL coach and Ernst Tanner, who is the sports director. That group makes all the major soccer decisions. Prior to that, we have a player progress committee, which discusses our top talent's development.

Of course, running such an extensive youth program is expensive, and that money could go to acquiring pro-ready players. So why make the effort?

TOMMY WILSON: Every top club on the planet, even those that can afford to buy a $100 million player, generally has a youth academy. In my experience, young players who come through the system from the hometown -- the fans have an affinity for them. They’re part of the fabric of the area, they grow up in the culture.

The fans really appreciate when they win a tackle, make a nice pass. It’s like the fans are willing them to succeed.

And there's a financial aspect. There's the return on investment part, of course. If you develop a Homegrown – a Brenden Aaronson playing the No. 10 -- his starting salary is much more cost effective than to buy a DP, for example.

But what's more fulfilling and tangible are the links to the community. To grow up in our culture. We have a pathway in our club for players and staff who we believe in. We've got homegrown players and homegrown staff. That's part of our culture. 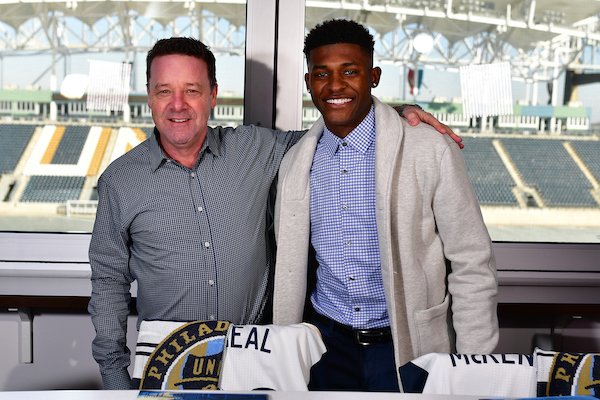 Defender Mark McKenzie, currently captaining the USA at the U-20 World Cup and playing alongside the Union's Matt Real, signed a Homegrown contract in 2018 and made 19 MLS appearances. McKenzie, Aaronson, Anthony Fontana, Auston Trusty and Matt Freese comprise the Homegrown contingent on Union's roster.

Can you comment on the reports that MLS clubs are considering leaving the U.S. Soccer Development Academy?

TOMMY WILSON: There's been some talk around that. It's not just in this country. The debate rages across Europe as well. Should we have reserve leagues? Should we have B teams playing in professional leagues? What’s the best path for the players? We're kind of fortunate on the East Coast. On our doorstep we have good clubs who are non-MLS.

U.S. Soccer have talked about tiering the Development Academy, so you don't make an air trip for an 8-0 victory. I think that makes sense.

I think the evolution of player development in this country, the increasing amount of professional clubs, both MLS and USL, projecting that forward, there is a potential for an academy league for teams that have a professional pathway.

As a former youth national coach, I know how difficult that task can be. In a small country like Scotland, with 5 million people,  I had to access 25 regional coaches who could give me an idea of how the top players were doing. I can only imagine the challenge if I'm the U.S. U-17 national team coach in a country of 300 million. But I think they've got an excellent scouting network headed by Tony Lepore [Director of Boys Talent Identification]. I think they do a really good job.

On the progress of young American players.

TOMMY WILSON: I've been coming here nearly 30 years. I remember coming here and reading Soccer America. I always felt that because of the diversity in the population, the athletes -- if you could get it right in this country, what a powerhouse it could be. If you could harness and develop that talent.

I've seen significant changes in the level of player in this country and I can only see it getting stronger. There are young boys here who are as good as I've seen. And I think the sky’s the limit. I honestly do.

If we can get the league structure right. And it’s not a one size fits all, because I believe what suits the East Coast might not suit the West Coast, and the teams in the central region. I think we need to be flexible in our approach, but the young American player, who is growing up with the game -- he can watch more soccer on TV than back in Britain. So they're growing up with the game.

Our young boys were watching the Liverpool-Barcelona and they were so passionate about it. That didn't happen when I started coming here way back in the day.