The USA has reached the knockout stage of the U-20 World Cup for a third straight time thanks to Thursday's 1-0 win over Qatar on a goal from Tim Weah. Coach Tab Ramos' team started out much less impressively than in its first two games, a 2-1 loss to Ukraine and 2-0 win over Nigeria, but improved immensely when Ulysses Llanez entered the game in the 62nd minute. The USA will face France or Mali in the round of 16 on Tuesday, and will be without Chris Durkin and Alex Mendez, who will serve suspensions for picking up their second yellow cards of the tournament. 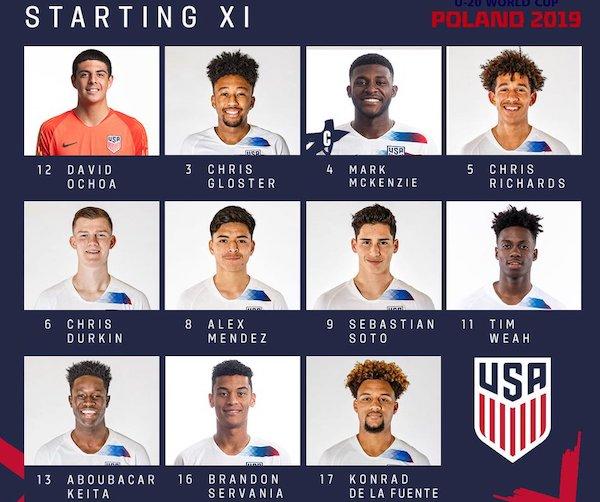 David Ochoa took over in goal for Brady Scott, who started the USA's first two games. In the 11th minute, Ochoa stormed out of his penalty to intercept a dangerous through ball. He securely handled long-range shots and denied Hashim Ali from close-range with a foot save late in the first half and a golden chance for the Qataris. Ochoa boldly and effectively came out to handle crosses, including late in stoppage time when a high free kick offered Qatar its last chance to equalize.

Chris Richards for a third straight game marshaled the U.S. defense and with central partner Aboubacar Keita broke down several Qatar attacks, although Keita needed to be bailed out by Ochoa when he coughed up the ball in the 37th minute. Richards and Keita passed wisely during buildups while midfielders shed their markers. Mark McKenzie's tentative play denied the USA the offensive boost that it had gotten from Sergino Dest, whom McKenzie had replaced, and struggled at times against Yusuf Abdurisag. McKenzie picked up a yellow when he was beaten in the 14th minute. Left back Chris Gloster continued to be one of the USA's most dependable players, nearly unbeatable, but he too got into the attack less frequently.

One of Chris Durkin's poor passes created an early chance for Qatar and defensively he failed to unsettle the Qatar midfield as he had the Nigerians. And he committed an asinine yellow-card offense. Alex Mendez as well got a costly caution for a foolish act and failed to convert a penalty kick that would have made it 2-0. Mendez's 40-yard free kick late in the first half required a save from goalkeeper Shehab Mamdouh, but his second-half free kicks from the edge of the penalty area went high. Mendez did, however, pounce on a loose ball to assist on Tim Weah's goal and delivered a brilliant through ball for a Weah breakaway that Shehab Mamdouh stopped. Brandon Servania toiled defensively but his impact on offense was limited to the penalty kick awarded when fouled by Ahmed Alminhali.

Konrad De La Fuente was ineffective on the right wing. Center forward Sebastian Soto on his two chances hit the side-netting, after Shehab Mamdouh bobbled Tim Weah's sharp low cross, and shot straight into the keeper's chest. When the USA needed him to keep possession, Soto dribbled into crowds of Qataris instead looking for and combining with his teammates. Weah nutmegged Ahmed Suhail before his excellent strike for the gamewinner.

Within a couple minutes of replacing De La Fuente in the 62nd minute, Ulysses Llanez beat left back Homan Ahmed and sent in a dangerous low pass that Mamdouh batted away and was fouled 19 yards out for a free kick the Mendez hit too high. Llanez's foray down the right wing helped set up the goal, and he passed the ball to Servania, who was fouled for the penalty kick. Richard Ledezma hit the crossbar with a 17-yard shot in the fifth minute of stoppage time.

NOTABLE
THE FOOLISH YELLOW CARDS. In the 72nd minute, with the ball out of bounds, Chris Durkin shoved Yusuf Abdurisag to the ground to retrieve the ball for a U.S. free kick in midfield near the sideline. Alex Mendez, who escaped a retaliation caution earlier in the game, got his yellow card for planting his cleats on Ahmed Suhail's foot in the 78th minute. Not only was this 10 yards outside the Qatari penalty area, Suhail was already going down after fouled by Sebastian Soto. It was the second yellow for both Durkin and Mendez, who will be suspended for the round of 16. (The yellow-card slate isn't cleaned until after the quarterfinals.) 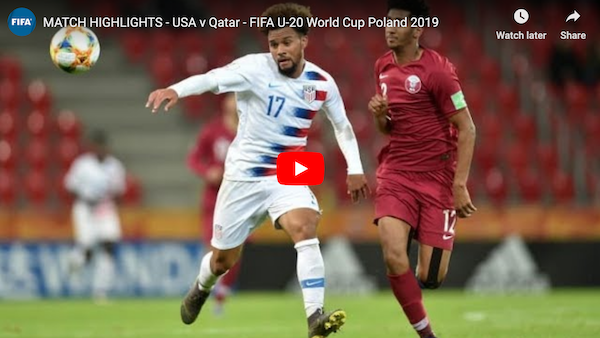