In what will go down as one of the biggest U.S. wins ever at a men's world championship, the USA beat France, 3-2, to reach the quarterfinals of the U-20 World Cup. Facing the next generation from the country that is the men's World Cup champion, Coach Tab Ramos' team took a 1-0 lead in the 25th minute, went into halftime tied 1-1, and trailed 2-1 with 35 minutes left. Sebastian Soto equalized with his second goal of the game and sub Justin Rennicks struck the gamewinner off a rebound from Sergino Dest's long-range shot. The USA faces Ecuador in the quarterfinals on Saturday. 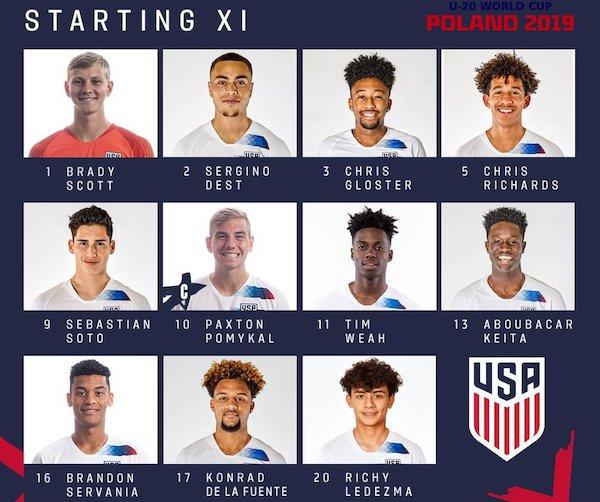 Brady Scott, who started the first two games of the tournament, returned after David Ochoa played against Qatar. Neither French goals would have been easy saves but neither was unstoppable. On France's second goal, Moussa Diaby's shot went under Scott's leg, hit the post and rebounded out for Nabil Alioui to finish. Letting a stoppage-time free kick from midfield bounce through the area fortunately went unpunished. Best moment for Scott was when he came out of his penalty area to clear a 78th-minute through ball.

France's first goal against the USA came after Chris Gloster's midfield clearance was intercepted to spark a counterattack that central defenders Chris Richards and Aboubacar Keita weren't in position to interfere with. On France's second goal, Diaby roasted Keita, who had to cover the USA's left flank, before taking that shot that rebounded to Alioui to make it 2-1 France. But otherwise, the U..S. backline battled well against the French, who came into the game having won all three of its group games, over Saudi Arabia (2-0), Panama (2-0) and Mali (3-2) -- while out-shooting and dominating all three in possession. On the 2-2 equalizer, Keita sent a precise pass along the sideline to Gloster, who relayed it to Ulysses Llanez, who found Tim Weah, who fed Soto. Right back Sergino Dest defended effectively and launched the long-range shot that goalkeeper Allban Lafont could only deflect, allowing for the gamewinner by Justin Rennicks.

Richie Ledezma, making first start of the tournament, set up the opening goal with a perfectly timed pass to Soto after dribbling 35 yards through French territory. Brandon Servania, who won the ball before giving it to Ledezma on the sequence, and Paxton Pomykal had to battle against a polished French midfield and were limited in attacking opportinuties. Pomykal won a 50-50 clash that popped the ball out to Weah on the game-winning goal sequence and Pomykal got a second wind to defend tenaciously in midfield as the French sought the late-game equalizer.

Sebastian Soto perfectly finished into the side-netting from 13 yards to give the USA a 1-0 lead and made sure to stay onside to receive Tim Weah's pass before striking from 12 yards for the 2-2 equalizer. Weah's wing play had kept pressure on the French -- he set up Ledezma in the 12th minute for the USA's first shot -- and he showed up in the middle on the assist to Soto, and his blocked shot bounced to Dest on the buildup to the game-winning goal. Konrad De La Fuente failed to threaten from his wing.

For the second straight game, Ulysses Llanez came off the bench and gave the USA a major boost. His high shot after winning the ball minutes after arriving proved to the French that USA could still surge. His dribbling in midfield helped keep possession for the USA and drew fouls from the French. He passed the ball to Weah ahead of Soto's equalizer. Justin Rennicks covered lots of ground and harassed French defenders and midfielders when they had the ball. He pounced on Lafont's deflection to stab home the gamewinner.

NOTABLE
The USA was playing without playmaker Alex Mendez and defensive midfielder Chris Durkin, who were serving yellow-card suspensions.

TRIVIA
Three in a row. The USA is the only 2019 quarterfinalist that also reached the final eight of the previous two U-20 World Cups. 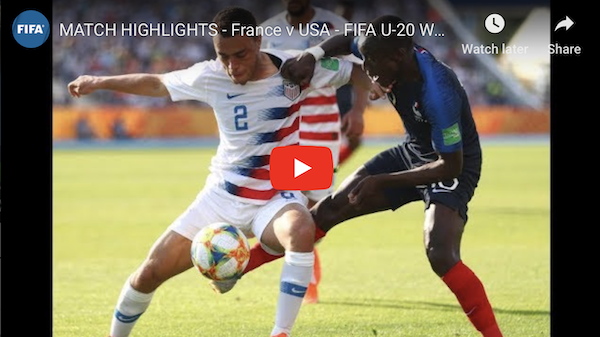