The USA suffered its first loss of the Gregg Berhalter era, falling 1-0 to Jamaica on Wednesday in a tuneup for the Gold Cup. It was Berhalter's fifth game at the helm. Shamar Nicholson, a 22-year-old sub who plays for Slovenian club Domzale, scored the winner from 27 yards out. Jamaican goalkeeper Andre Blake needed to make only one save. 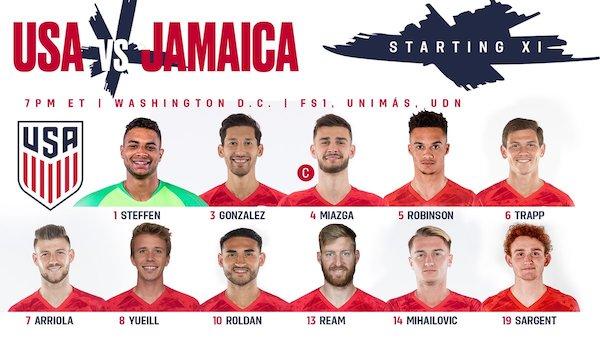 Zack Steffen was lucky to go unpunished when he weirdly passed the ball to Peter-Lee Vassell inside the U.S. penalty area in the 13th minute. He didn't jump high enough to stop Shamar Nicholson's rocket.

Jamaica, attacking mostly with just one striker, Dever Orgill, managed only one shot inside the U.S. penalty area. But the inaccurate passing of Matt Miazga and Omar Gonzalez contributed to the USA's lack rhythm. Tim Ream was better on the ball and on the left side enabled Antonee Robinson to focus on offense.

The USA was unable or unwilling to attack through the middle, and its predictable approach made it easy for Jamaica -- especially because of the USA's awful passing. On the left side, Antonee Robinson was guilty of several giveaways -- and a header over the crossbar while under no pressure when the USA finally managed a purposeful cross late in the first half. Paul Arriola fared better on the right side but faded after a strong start. Jackson Yueill made a forgettable debut. His central partner, Wil Trapp, stopped in his tracks as Nicholson unleashed his shot.

After a first half in which all but one of his crosses were off target, and his seven turnovers occurred in the Jamaican half, Cristian Roldan gifted the ball to the Reggae Boyz in lead-up to their 1-0 goal. Djordje Mihailovic, a poor passer and ineffective dribbler like most his teammates on this evening, botched a shot inside the penalty area and misplayed the ball on a late stoppage-time breakaway. Josh Sargent saw very little of the ball and didn't get enough power -- or height would have been good -- on his 88th-minute shot that Andre Blake made a diving save on. He shot wide in the 71st minute.

Shortly after making his USA debut, Duane Holmes scrambled away from three Jamaicans and set up Sargent for a shot. Holmes also provided the service for Sargent's second attempt. Nick Lima managed one in the USA's five shots -- way over the bar from outside the penalty area. Jonathan Amon and Joe Gyau charged ineffectively down the wings.

TRIVIA. Wednesday's loss to the Reggae Boyz marked the first time the USA has lost to Jamaica in friendly. The USA's two other losses in the previous 25 meetings -- in addition to 15 U.S. wins and 8 ties -- came in World Cup qualifying in Kingston in 2012 and in the 2015 Gold Cup semifinals in Atlanta.)