A Ref's View: Playing styles clash amid the screams of coaches and parents

The tournament final started in pleasant conditions, a nice respite from two days of refereeing in a broiler.

Within a few minutes, one team’s parents were yelling at the other team’s coaches. In the second half, that other team’s coaches were yelling at the refs, a conversation that continued after the game. Meanwhile, the result had been a triumph of negative tactics (and a goalkeeper who had gone into full-blown “Tim Howard vs. Belgium” mode) over free-flowing possession soccer.

I forgot the punchline: This was an Under-10 boys tournament final. U-10.

In looking back after the turf pellets were kicked out of everyone’s shoes, I’m not really sure how to apportion blame.

The refs, of course, were perfect. I was one of them. Well, maybe not perfect. No one is. But as an AR in a U-10 game, I didn’t have much to do as I moseyed between the buildout line and the end line.

(In that game, anyway. In another U-10 final the same day, I put up the flag when I clearly saw a defender grab an attacker who was one step away from a five-yard shot against a wide-eyed goalkeeper. The attackers converted the penalty and went on to win 3-2. Yet when the losing coach came up and berated us after the game, he said my calls -- that one and a close offside call -- were correct. Yay?) 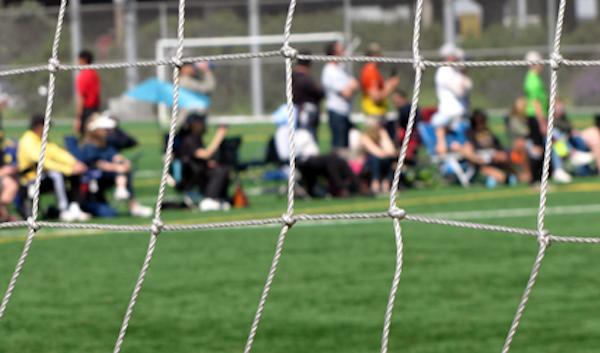 In the game in question, the one in which the winning team’s coaches made Jose Mourinho look like Juergen Klopp, those coaches decided to protect their lead by stepping out on the field and yelling at the center ref over some meaningless call. I did my AR duties and asked them to move back off the field. They informed me that they were speaking with the center ref and it was none of my business.

After the game, the center ref suggested the head coach should control himself a bit better. The coaches responded with various insults of our soccer acumen and accused me of being too focused on their sideline behavior to call fouls in their team’s favor. I responded by saying they need to listen when an official is telling them to step off the field, and what sort of fouls should I call when my half of the field consisted of bunch of frustrated kids trying to pass, not push, through a bunkered bunch of destroyers playing kickball?

Yeah, they didn’t like that. But we all did the smart thing and went our separate ways at that point

I have a tendency to look back on my actions with a mix of reasonable second-guessing and unreasonable self-flagellation. It’s a mix of residual guilt from a conservative upbringing and the decision to go into journalism.

In this case, I’ve settled upon the notion that referees can always expand the tools at their disposal for defusing toxic situations such as when a couple of guys want to start comparing soccer knowledge like Peter Griffin and the naked guy going head-to-head in a trivia contest to prove who’s the bigger Kiss fan. I’ve seen my travel kid’s coach get tossed after the ref claimed to know more about the game than said coach. In my coaching shoes, I’ve had a patronizing referee tell me I’ll understand why he didn’t call shoves from behind when I had a bit more experience. Maybe I should start taking my resume to the field.

But well before the coach-ref debate, back when the score was still 0-0, the non-kickball team’s parents were yelling across the field at the opposing coaches even when the score was 0-0. “Is this what you’re teaching these kids?” they asked rhetorically. I did tell their coach he might want to chat with those parents about yelling at another team’s coach. I didn’t tell him they had a point.

Here’s what I learned the next day ...

Those two teams had faced off earlier in the tournament. And the team that was all Sam Allardyce in this final tried to play actual soccer in that game and lost. The team that won that game and lost the final is from a club that is renowned for getting kids to pass as much as possible at an early age, even to the point of tracking their U-9 teams’ passing stats as if they’re seeking an endorsement deal with the SoccerMeter app, so it’s no surprise when they win a battle of possession.

So it’s apparently not the case that this style of play is what the trophy-winning coaches are teaching the kids -- at least, not exclusively. And perhaps I’m a hypocrite for being dismayed here, having argued a couple of months ago that we need to acknowledge that direct play is sometimes the best option. Also, if bunkering wasn’t part of the game at the highest level, Sweden wouldn’t have beaten the U.S. women in the Olympics.

I don’t know. On one hand, a team learned to be adaptable to win. On the other hand, a team that played brilliantly but couldn’t beat the bunker left the field in tears.

So the parents’ question is valid, and it applies to everyone at that field. What are we teaching these kids?

youth
12 comments about "A Ref's View: Playing styles clash amid the screams of coaches and parents".
Read more comments >
Next story loading