The U-20 World Cup ended for the USA with a 2-1 quarterfinal loss to Ecuador, which arrived to the tournament as South American champion. The USA had the entire second half to close the one-goal deficit, attacked persistently, but failed to create clear scoring chances. Although a relatively evenly played game -- aside from the first 10 minutes when Ecuador dominated -- Ecuador hit the crossbar and squandered two prime scoring opportunities in the second half. 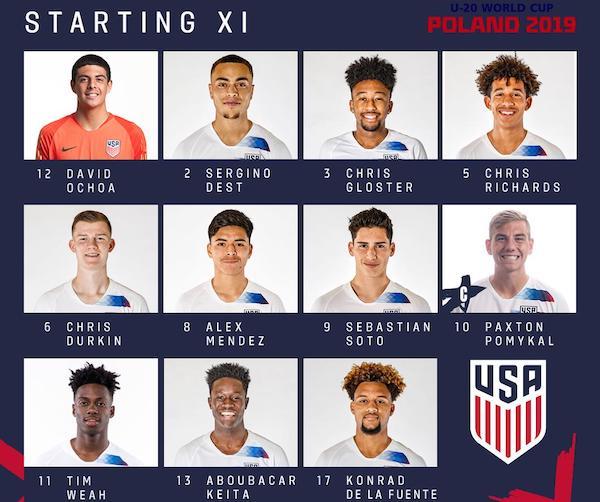 David Ochoa returned to the lineup, replacing Brady Scott, after playing in one of the previous four games, the USA's 1-0 win over Qatar in group play. On Ecuador's opening goal, Ochoa was beaten from 26 yards. He made a diving save on Alexander Alvarado's header from eight yards in the 68th minute.

In general, the backline coped well with Ecuador's dynamic attack. Chris Richards won a host of high balls and tackles. Right back Sergino Dest stood out for launching much of the USA's attack in the second half. Aboubacar Keita went unpunished when he coughed the ball in the 63rd minute. Chris Gloster won most his battles with Gonzalo Plata. After winning a header that he directed to Chris Durkin, Gloster took the return pass and sent a promising ball to Soto in the 71st minute.

Chris Durkin misplayed a ball to Jose Cifuentes in Ecuador's half and missed a slide-tackle as Cifuentes stormed upfield to unleash his shot for the 1-0. And he gifted the ball to Campana in the U.S. penalty area in the 82nd minute. (Campana shot straight to Ochoa). But Durkin also hit a couple of nice cross-field passes, toiled defensively and helped the U.S. keep possession for stretches in the second half. Paxton Pomykal, who helped set up Sebastian Soto's 58th minute chance with a crisp pass to Ulysses Llanez, also covered a lot of ground and won balls. But Alex Mendez was still saddled with too much defensive duty. Mendez's clever passing got the USA going after Ecuador's dominating start. He shot just wide from long range in the 20th minute.

After opening the tournament with two strong games, Konrad De La Fuente was ineffective on the wing against Qater and France, making his start against Ecuador a surprise in light of Ulysses Llanez's game-changing appearances off the bench. De la Fuente, subbed at halftime, again disappointed. Much better was winger Tim Weah, who volleyed home in the equalizer from eight yards, and caused by far the most problems for the Ecuador defense.  Weah did rush and hit high and wide an 89th minute shot from the corner of the penalty area with Pomykal and Sebastian Soto open in the middle. Soto hit the USA's best second-half chance into the side-netting.

Ulysses Llanez came on at halftime and evaded three Ecuador defenders in the penalty area to feed Soto, but Llanez faded in the past 20 minutes. Richie Ledezma replaced Mendez in the 74th minute and shot wide late in the game.

TRIVIA 1
The loss means the USA has yet to win back-to-back games in the knockout stage on the men's side in a U-20, U-17 or senior World Cup.

TRIVIA 2
The USA and Ecuador also met at the last U-20 World Cup, in 2017. The group-stage clash ended, 3-3, with two goals by Josh Sargent, who was eligible for this tournament but not chosen because he was with the full national team for its friendly with Jamaica. 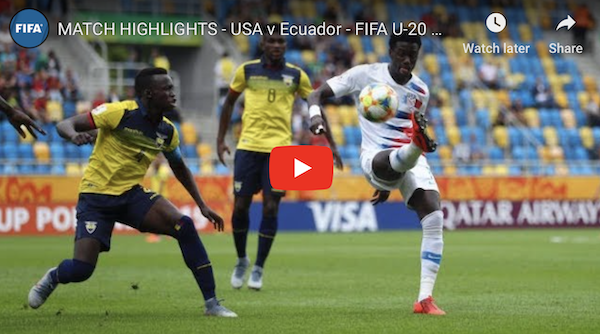