U.S. embarrassment in Cincinnati is product of a sport that remains foundationally flawed 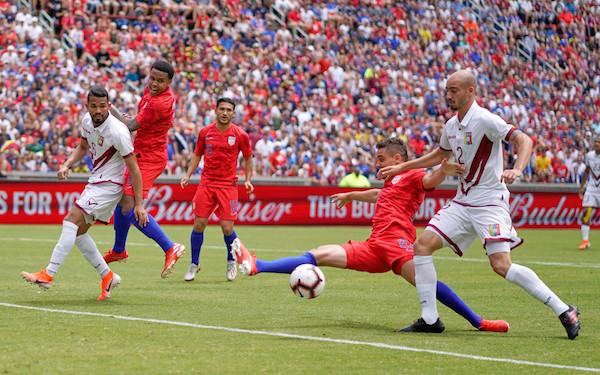 With the backdrop of the Women's World Cup -- where the U.S. women are the nation's darlings and tournament favorites -- the U.S. men's national team sank to a new low when it fell, 3-0, to Venezuela in its last tune-up game before the Gold Cup -- Venezuela, a team that has never played in the World Cup but looked at times in the first half like it was toying with the USA.

Any number of factors can explain away the performance:

-- The opening goal was a fluke;
-- U.S. players are still building up their fitness for the Gold Cup;
-- Its two best players, Christian Pulisic and Tyler Adams, and long-time captain, Michael Bradley, did not play.

But still, the look of the U.S. performance in Cincinnati was bad. Pick your adjective ...

-- Embarrassing.
-- Shocking.
-- Predictable, given what happened four days earlier against Jamaica.
-- Labored.
-- Passionless.
-- At times laughable (I think of Jordan Morris getting in the way of his buddy Cristian Roldan's attempt at an open goal).

This wasn't some some friendly airing late at night on ESPN2 or FS1, this was a game broadcast on the big Fox -- the only U.S. men's game of the summer on the network  -- with the lead-in from the three women's games played in France earlier in the day on Fox and FS1. It should have attracted the biggest TV audience of the year for a men's game on English-language television.

But late in the first half, after La Vinotinto scored its third goal, commentator Stu Holden told viewers: "I don’t blame you for not watching."

This was on Fox, which has invested more money on media rights to soccer properties involving U.S. leagues or teams -- MLS, U.S. Soccer on its own and via FIFA -- and its lead men's soccer commentator said the product wasn't worth watching.

It would be a little like walking into an Apple Store and looking to buy the latest Apple product and the store manager coming up to you and saying, "I wouldn't blame you if you didn't buy it." The product wouldn't survive with that assessment. Pick any kind of product and any associated business and it won't survive.

You got to respect U.S. coach Gregg Berhalter. Right after the Jamaica game -- a 1-0 loss in which the USA managed one shot on goal -- he guaranteed there would be more poor performances like the one at Audi Field. No one would have predicted the next poor performance would have come so soon and been so bad.

The danger is that Berhalter's players will stop buying into his system and then what? They certainly looked uncomfortable against Venezuela. But Berhalter is only working with the players he has at his disposal. All the talk about the omission of Josh Sargent from the Gold Cup roster overshadowed just how thin the U.S. team is.

On Sunday, Berhalter started four European-based players -- all players who were on teams that were relegated (Tim Ream) or finished just above the relegation zone (Tyler Boyd, Weston McKennie and Matt Miazga, albeit all bright spots). The spine of the U.S. lineup consisted of Zack Steffen in goal, Wil Trapp in central midfield and Gyasi Zardes at center forward, all players Berhalter had at the Columbus Crew, which is 1-8-1 in its last 10 games.

But I don't blame Berhalter or his players. American men's soccer is the product of a sport that remains fundamentally flawed.

The history of the game is of a sport that at every turn has been pulled up by its own boot-straps. For a quarter century, the men's national team overachieved until it didn't any more. American pro soccer failed or almost failed four times but MLS, given up for dead in 2001, persisted thanks to the commitment of a few owners and will soon hit 30 teams.

Sunil Gulati and Don Garber are regularly vilified on social media, but what they have achieved over the last 35 years for Gulati and 20 years for Garber is nothing short of an American sports miracle. That doesn't mean soccer has overcome its foundational issues.

If the American soccer boom had taken place in the 1930s, 1940s or 1950s, it could have grown without competition from European or Mexican leagues for the soccer fan because there was no television to speak of and no Internet. It could have invested in prime real estate for soccer facilities before it was all taken or prohibitively expensive. It didn't, and it's created huge barriers. Geography and weather create challenges no major soccer nation has to deal with except Brazil, and Brazilian soccer existed for years as a regional sport.

Probably the most promising thing that has taken place in the last year or two is how young players are breaking through into first teams at MLS clubs or lured to top European teams. The U.S. U-20s in Poland had players on the books at the champions of the Dutch, French, German and Spanish leagues. The U-20s represent the post-Bradenton generation -- the first generation of players who went through residential and/or educational programs MLS clubs have launched in recent years. The investment clubs are making in coaching, programming, education, housing and facilities is in the tens of millions of dollars each year.

More generally, American soccer struggles because of its lack of access to free (i.e. taxpayer-funded) and convenient facilities that are available to those growing up playing basketball and football and its pay-to-play system that was developed as an end around high school soccer and then sold as a "better pathway" to college.

The Under-20 World Cup provided a valuable lesson. As deep as Tab Ramos' pool of players was, other nations aren't sitting still either. Ecuador, which had never reached the quarterfinals before this year, matched up at least as good as, if not better than, the USA at every position. (The greatest statement U.S. Soccer could have made in this "rebuilding" year was go all in and send -- or try to get released and send -- Tyler Adams and Sargent to Poland.)

Despite all the investment of U.S. Soccer and MLS, the men's national team can continue to slog along in the face of these foundational issues. But at least there needs to be an open conversation about these challenges and possible solutions.

I have always been skeptical of promotion-relegation and whether the pros outweigh the cons but there at least needs to be a serious discussion.

Gregg Berhalter is right that the debacle in Cincinnati is the time to remain calm, but that's only good if there's a serious examination about what's wrong.