The USA's 13-0 win over Thailand in its Group F opener set the record for biggest rout in Women's World Cup history, exceeding Germany's 11-0 win over Argentina in 2007. Alex Morgan scored five to take an early lead in the Golden Boot race. Next up, on Sunday the USA faces Chile, which opened with a 2-0 loss to Sweden. 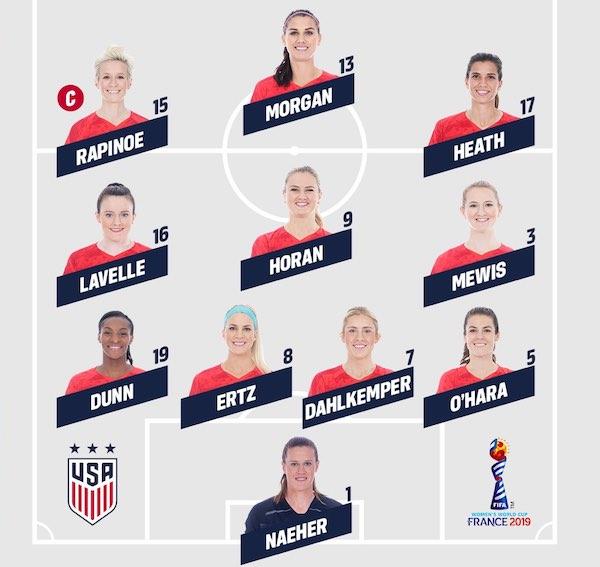 The two Thai shots that reached Alyssa Naeher came straight to her from long range.

Thailand pulled of a counterattack attack in each half, and both ended with a tackle by Kelley O'Hara, the right back who pushed forward from the get-go and delivered the cross for the game's opening goal, an Alex Morgan header. Central defenders Abby Dahlkemper and Julie Ertz had little to do, and both passed effectively the few times they got the ball. Left back Crystal Dunn assisted on Morgan's fifth goal and help create two others, including a well-timed pass that Sam Mewis relayed to Rose Lavelle for the 7-0 goal.

Lindsey Horan commanded the midfield and made it easy for Rose Lavelle and Sam Mewis, who each scored twice, to move deep into Thai territory.

In addition to her five goals, Alex Morgan assisted on three. Tobin Heath's free kick led to the deflection that Horan buried, but Heath mis-hit her crosses and had a relatively low-key performance on the right wing before getting subbed in the 57th minute. Megan Rapinoe assisted on two goals and hammered home the ninth goal.

Mallory Pugh assisted on Rapinoe's goal and rounded the keeper to score her first World Cup goal in the 85th minute. All of Christen Press' touches were sharp, such as her pass to Morgan on the goal that made it 8-0. Carli Lloyd shot poorly twice and missed a volley from six yards before her clean finish in stoppage time.

TRIVIA 1. The USA's previous biggest margin of victory in a World Cup history came with a 7-0 win over Taiwan at the inaugural World Cup in 1991.

TRIVIA 2. Alex Morgan's five goals against Thailand are more than her total in the previous two World Cups. She scored once in 2015 and twice in 2011. 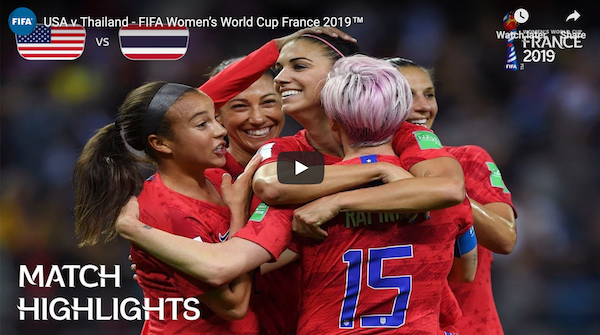