Dispatch from Reims: Gluttons for glory 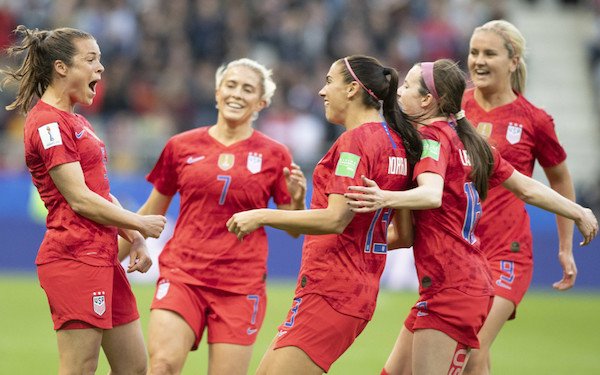 As the U.S. team kicked off this evening in Reims it looked like they were lining up in a 0-3-7 formation, the kind of tactical norm last seen in the late nineteenth century. That’s not quite how they ended up playing (though it wasn’t far off), but as a statement of intent it said a lot about how they planned to go about the business of destroying Thailand in their first group game.

To win by 13 goals to zero may seem like unnecessary greed. Is there no Mercy Rule at this World Cup? Yet it’s far better to be accused of goal-mouth gluttony than to spend 90 minutes dallying in the final third and looking lost for ideas about how to break down two rows of five defenders. As several other teams have already found out during these first few days of France 2019.

Let’s not dwell on the dubious qualities of Thailand. They qualified for the World Cup, so they have to be treated seriously, no matter how weak their resistance turned out to be. Let’s focus instead on a US performance that should be celebrated on several levels. It was a terrific display of all-out attacking soccer, with a number of superior goals and exhilarating performances – in particular from Kelley O’Hara, Rose Lavelle, and of course Alex Morgan. This game showcased the depth of the squad, allowing players like Carli Lloyd and Mallory Pugh to come off the bench and keep the goals flowing, and maintaining the pressure on teammates to not let up.

This sounds inane, but it was also a true demonstration of team spirit. Each success was celebrated with the bench, at some length, as though it was the go-ahead goal. That augurs well for this traveling community in the coming weeks. And the fact that the more they scored, the more they seemed to want to score, is testimony to a professionalism that is still, after all these years, pushing hard to be treated and paid in the manner these players strongly believe they deserve.

This was personified by Morgan, not just through her five goals, but by her industry. With 15 minutes to go, having already scored a hat-trick and with the score at 8-0, she tracked back 20 yards to the center circle to dispossess a Thai player who was in the position of vaguely threatening to attack. She didn’t need to do that. At 8-0, no U.S. player needed to do anything but put their feet on the ball and pass it around at the back. Yet they scored five more goals before the night was over.

Ever since France took South Korea down, 4-0, in the tournament’s opener last Friday, the more fancied teams at France 2019 have been struggling to break through supposedly lesser opponents. The most notable example of dogged defending was Argentina’s 0-0 "victory" over Japan, which the Argentines celebrated as though winning a point had been the sole reason for them bothering to fly half way around the world. (They had lost every game they played in their two previous trips to the Women's World Cup.) Italy, meanwhile, topped that by disposing of one of the pre-tournament favorites, Australia. Canada, the Netherlands and Sweden all had to wait until their respective games’ final minutes before finding a way through the stubborn defensive lines of Cameroon, New Zealand and Chile.

These games may have acted as a spur in Reims. From the first kick, this was a match that was a cakewalk for the U.S., and terrifying for Thailand. Many of the goals looked like they’d just been rehearsed on the training ground, with the defense asked to be passive. It was easy because they made it look easy. It was expected, it was routine, but it had to be done.

The draw and the schedule has been exceptionally kind to the U.S. This was somewhere between a warm-up game and the real thing, an ideal way to work your way into the tournament. The U.S. made the best use of the 90 minutes by treating it like the real thing. They didn’t patronize their opponents, they devastated them. In the case of Thailand’s Miranda Nild, this was all too clear from her tears at the final whistle. But the hitherto ruthless Morgan took the time to offer her a few words of consolation, while the Thai fans applauded their team in a fashion that you can only describe as beyond worthy.

Will the other countries be awestruck, or will they dismiss this as a turkey shoot? There will be no easier team to play than Thailand at this competition. But there may also be no harder team to defend against than the United States.