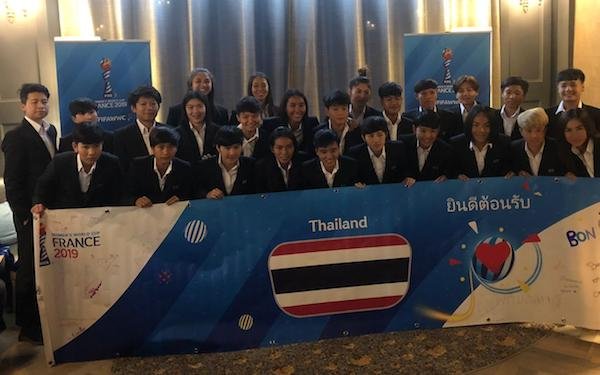 If it wasn't apparent beforehand, it quickly became clear that Tuesday's USA-Thailand game would be a rout.

The Thais trailed, 3-0, at the half, and they were lucky to not have a couple of penalties called against them. But early in the second half, when the USA scored four goals in six minutes, it became obvious Thailand could suffer a record-breaking defeat. The 13-0 loss in Reims set not only a Women's World Cup for the largest defeat but a World Cup record -- women or men.

USA-Thailand was an unfair fight, and all signs pointed to a one-sided game, but the reality is the Thais -- regional powerhouses back in Asia -- deserved to be at the Women's World Cup.

After qualifying for the Women's World Cup in April 2018 and playing in a pair of Asian summer competitions, Thailand embarked on a nine-game tour, mostly against European competition, to prepare for the 2019 Women's World Cup, and it lost eight games.

The gap between Thailand and the USA was clear when it lost to Belgium, 6-1, 10 days earlier in its final tune-up played in Leuven. In April, Belgium had lost to the USA, 6-0, in Los Angeles. The only time the USA and Thailand played previously came in 2016 when the USA won, 9-0, in Columbus. It was memorable because it was the game before which Megan Rapinoe knelt in support of Colin Kaepernick during the playing of the national anthem.

Using the Belgium results and the Columbus game as barometers, the USA would have been expected to win by about 10 goals.

But that doesn't mean that Thailand shouldn't have been at the World Cup. Contrary to what some commentators were suggesting, the Chaba Kaew aren't first-time finalists. They played at the 2015 Women's Women's Cup and even won a game -- 3-2 over Ivory Coast -- something that seven teams had not done when they entered the 2019 Women's World Cup. (The four first-time finalists in France all lost their first game, but Spain, playing in its second tournament, won its first game when it beat South Africa, 3-1.)

Thailand qualified out of Asia, which has been awarded five berths since the Women's World Cup was expanded from 16 to 24 teams for the 2015 tournament. It was the beneficiary of the one of two extra berths in Canada four years away when it beat Vietnam for fifth place at the 2014 AFC Women's Asian Cup. In 2018, it qualified by reaching the semifinals of the AFC Women's Asian Cup, where it lost to Australia -- one of the current seeds in France -- in a shootout.

Both times Thailand benefited because North Korea -- considered one of the big five of Asian women's soccer along with 2011 world champion Japan, China, Australia and South Korea -- was suspended from the 2015 finals and because it didn't finish in the top three in 2014, it had to go through qualifying for the 2018 Asian tournament and finished behind South Korea in their group.

The Chaba Kaew are one of the oldest women's programs in Asia, competing in the AFC first women's championship in 1975, 10 years before the USA played its first international match. Thailand has been the most successful women's team in the Southeast Asia region and benefited from the financial support of its manager, prominent businesswoman Nualphan Lamsam.

Indeed, Thailand has been more used to winning by double-digit margins rather than losing like it did on Tuesday at the Stade Auguste Delaune.