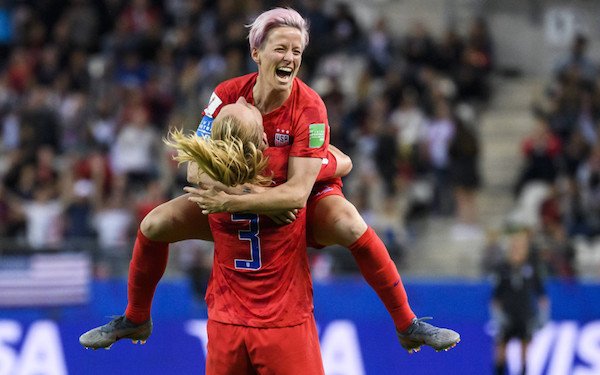 What do you say to the women’s soccer community after a couple of days in which the sports punditocracy debated the USA’s pile-on of goals and celebrations against Thailand?

This is what sports radio and columnists do. They discuss. They dissect. Sometimes the conversation is worthwhile, providing thoughtful exchanges on morality that go beyond sports. Sometimes they’re just filling time.

“Why do we need to find someone to blame? Because it’s sports radio.”

Today, women’s soccer is firmly entrenched in the mainstream blame game. Congratulations. And condolences. When women’s soccer celebrations spur so much discussion, it’s not a gender double-standard. It’s gender equality.

Baseball and hockey often find themselves in similar discussions, even after generations of revering “codes” of unwritten rules. When a pitcher throws a baseball at a batter for a slow home run trot, talk radio debates it. When a hockey player challenges someone to some clumsy face-punching for being too exuberant after a goal (and for declining a rematch), it’s more fodder for the media.

In the NFL, excessive celebrations have spawned everything from a Simpsons satire to ongoing tweaks of the rule book. It’s fair to say the topic is not ignored in the blogosphere and on talk radio.

What we generally do not hear about in these other sports are death threats against those with dissenting views. Perhaps some pundits have heard it all before, or perhaps they don’t happen. Either way, we’re not used to seeing a Canadian analyst fretting on Twitter about such threats.

And it’s not as if the analyst in question, Kaylyn Kyle, is some studio-desk flame-thrower who never played the game. She has 101 caps for Canada.

We can’t extrapolate too much from a couple of idiots. But the women’s soccer fanbase is not one to respond calmly when someone challenges the narrative.

The defensiveness is only getting worse as the cult of personality around U.S. players grows. A few years ago, many in the women’s soccer community accepted the notion that Abby Wambach embellished a bit at times. Today’s fans -- some of them with influential voices -- are so dead-set against such criticism that we’re not even supposed to question the notion that a defender’s hand on Samantha Mewis’ arm was enough to send the sturdy midfielder flying.

What we need to realize is this -- simple questions are not a sign of underlying disrespect. Kyle and Diana Matheson, who have both played alongside Americans for years, were among the loudest critics of the USA’s celebrations. They’re not saying Megan Rapinoe is evil. They’re saying maybe she shouldn’t have been quite so exuberant in celebrating her goal to make the score 9-0.

(The USA’s defense that they were celebrating the first World Cup goals of Rose Lavelle and Mallory Pugh falls apart with a check of the box score. Lavelle scored her second goal in the 56th minute to make the score 7-0. The rest of the U.S. goals: Alex Morgan, Rapinoe, Morgan, Pugh, Morgan, Carli Lloyd. Aside from Pugh, these are all players who’ve been there, done that.)

And the discussion didn’t break down neatly along gender lines. The critics weren’t all members of the patronizing patriarchy. Hope Solo joined the Canadians in questioning the celebrations. She’s not saying such things because a man told her to say it.

“You don’t have to be wearing ‘patriarchal glasses’ to think that USA could have behaved a lot more decently on Tuesday,” wrote Arwa Mahdawi in The Guardian.

Where we can all do better, whether we’re general-sports pundits or 24/7 soccer people, is to consider the nuance.

The USA’s celebrations weren’t malicious. They happened in the raw emotion of a team that had pent-up nervous energy. We can say they were a little over the top while adding the context as a mitigating factor.

It’s not a simple question. And it’s worth discussing. We often talk about the lessons we can learn from sports. We can’t learn those lessons if we don’t give these matters some thought.

The pundits -- again, soccer-specific or generalist -- also failed to distinguish between the score and the celebrations. People can question the celebrations without questioning the drive to score 13 goals. Most critics of the celebrations aren’t saying the USA should have instituted a rec-soccer mercy rule.

(The more pertinent question about the last 20 minutes, in which six goals were scored, is whether Jill Ellis erred in prioritizing extra goals over squad rotation. Morgan and Rapinoe played the whole way. Carli Lloyd was preferred to Jessica McDonald, raising the question of why McDonald is on the roster instead of an extra defender like Casey Short. Is goal difference, which doesn’t matter if the USA beats Sweden and won’t keep the USA from the knockout round anyway, more important than making sure Morgan and Rapinoe are fresh for the bigger games?)

Media pundits can be vultures. So can the Twitterocracy. When a few Toronto Raptors fans cheered after Kevin Durant was injured, that gets all the play. When Bay Area writer Ann Killion questions the narrative, Twitter critics act as if they’re in the arena and she’s not. When Raptors fans give Durant a standing ovation, that’s forgotten. Same thing when Raptors fans organize a fund-raiser for Durant’s charity.

Discussion is not bad. It’s inane at times, sure. It’s painful to read the hot takes of people whose entire knowledge of the U.S. women’s pay dispute is taken from a few sentences in their legal filing.

And focusing on the negative isn’t a great thing. We can do better in all sports while still having worthwhile discussions about the raw emotion of sports and whether or how they can be contained.

So if we can have those worthwhile discussions in women’s soccer -- without the death threats -- that’s a sign of progress.