Copa America Preview: Brazil at home or Argentina with Messi are the favorites 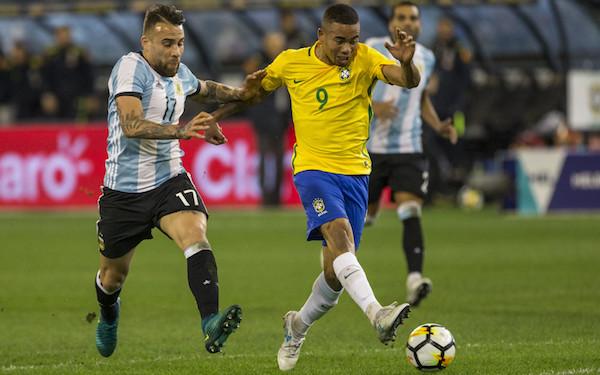 Amid the Women’s World Cup and Gold Cup, the 46th edition of the Copa America -- the oldest international competition in the world -- is almost an afterthought for many American fans.

The 12-team tournament kicks off on Friday in Brazil, where the hosts face off against Bolivia in Sao Paulo. Brazil and Argentina are the favorites, but Chile shouldn’t be overlooked either — they’ve won the last two editions, both in penalty shootouts, both against Lionel Messi’s Argentina. Uruguay is in the hunt too, after a successful World Cup in Russia, and it will be looking to add to its record 15 Copa America titles.

Besides Argentina and Brazil, it’s a relatively open tournament. Two teams can finish in third place in their group and still go through, so teams will be fighting for the last spots until the last game of the group stage.

Japan and Qatar, which is in its first Copa America ever in preparation to host the World Cup in 2022, add some spice to an already intriguing pool of teams. Though Qatar beat Japan 3-1 in the 2019 Asian Cup final, it’s a complete coincidence it’s now competing in Brazil. Here are previews for some of the top teams to compete in Brazil for the next month.

Brazil. Its odds to win on home turf took a blow when Neymar was ruled out of the tournament with a ruptured ligament in his right ankle in Brazil’s 2-0 win over Qatar on June 5. Nonetheless, Coach Tite brought up Chelsea’s Willian to replace him — a scary example of the plethora of talent the 58-year-old has at his disposal.

Tite looks to do better at this Copa America than Dunga did in the 2016 Centenario edition when Brazil didn't get out of the group stage and Dunga was fired. But Tite doesn’t have many excuses if Brazil doesn’t win the Copa on home turf either: Real Madrid starlet Vinicius Junior, Champions League winner Fabinho and longtime starter Marcelo were all deemed not up to snuff to make the Brazil squad. That’s how loaded the Selecao are this year.

Argentina’s 2019 Copa America squad has only nine of the same players from the 2018 World Cup squad, on which new coach, interim boss Lionel Scaloni, was Jorge Sampaoli’s assistant. Part of the reason a caretaker coach is still in charge of Argentina is because the 2022 World Cup is to be played in late fall/early winter and the qualifying campaign doesn’t begin until March.

Of its seven defenders Scaloni brought to Brazil, Nicolas Otamendi accounts for 60 of their 115 caps, and 15 of the 23 players have fewer than 15 appearances.

South America will hold its collective breath to see if Messi can finally win a senior title with his side. With Neymar out and Chile’s 2007 Under-20 contingent running out of steam, this may be his best opportunity yet.

Colombia. Ready to rebound after a missed 2018 World Cup and a year of frustration with Bayern Munich, Colombian talisman James Rodriguez returns to his 2014 World Cup stomping grounds that turned him into a household name almost overnight.

Coach Carlos Queiroz managed his first match for Colombia only in March, but Queiroz has the experience to bring Colombia home its second Copa America ever after its lone tournament victory when it hosted in 2001. Queiroz has coached Portugal twice, Real Madrid, Manchester United (assistant), Iran, even the New York Red Bulls across his impressive 30-year coaching career.

Uruguay. The Celeste must rely on its youth if it wants to go far in this year’s edition. Two of the young standouts on the 2018 World Cup team --  Rodrigo Bentacur and Lucas Torreira, 21 and 23, respectively -- look to add balance to a team that historically has had a strong defense, a strong attack and not a whole lot in between.

It’s a time of transition these days for Uruguay, too: Luis Suarez is recovering from his knee surgery, while Edinson Cavani and its rock in the back, Diego Godin, aren’t getting any younger. The Seattle Sounders’ Nicolas Lodeiro will look to get a starting role with La Celeste in Brazil. Uruguay is in Group C with Ecuador, Japan, and Chile.

Chile. Can Chile three-peat? Alexis Sanchez is coming off of a disappointing season at Manchester United, but fellow forward Eduardo Vargas scored 17 in 48 appearances in all competitions for Tigres in Liga MX.

Barcelona’s Arturo Vidal can play against anyone in the world if he gets help in the midfield from Bayer Leverkusen’s Charles Aranguiz and Colo-Colo’s Esteban Pavez.

An experienced core of defenders in Mauricio Isla, Gary Medel and Jean Beausejour have 329 caps between them. In the toughest group of the tournament, Chile probably has to get a result from the Uruguay match if it wants to qualify for the knockout rounds.