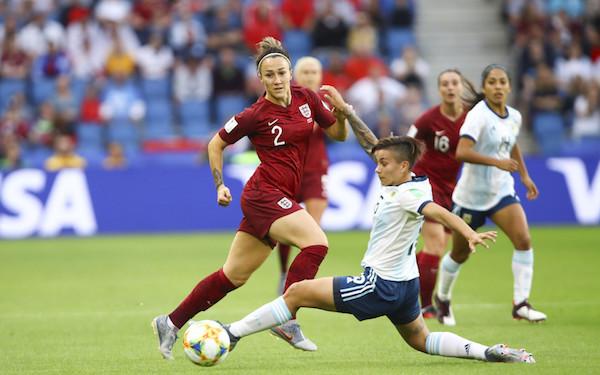 There’s a significant and valid criticism of tournaments that opt for the 24-team format, which posits that you spend two weeks and 36 matches just to rid the competition of its eight weakest countries. What remain are those 16 teams which should have been the sole participants to begin with. Then again, with just 16 teams here we’d have missed tonight’s fascinating game in Le Havre between England and Argentina.

Yes, it was one-sided. Certainly, Argentina never looked like scoring. It had two weak efforts on target all night. And yet for an hour it held out against a strong England team, to the point where it looked like pulling off the same 0-0 draw it had managed against Japan. For their sheer determination in the face of the odds they face -- including negligible support from their own FA -- it would have been hard to begrudge the Argentines another clean sheet, despite some frustrating gamesmanship.

That Argentina level-pegged for an hour was down to two factors, both of them goalkeeper Vanina Correa. First, because of her saves. Second, because of her time-wasting.

Let’s look at the positive side to her play. She leapt to her left to turn Nikita Parris’s penalty against the post in the 28th. minute. Then just before half-time she denied Beth Mead when the England forward was played through one-on-one by Fran Kirby, but couldn’t place her shot beyond Correa’s outstretched foot. Finally, just after half-time she parried a fierce effort from Parris again. These were three stellar stops, the kind that win points. She was rightly given MVP.

Then there was the negative side to her play, but it’s hard to blame her when referee Qin Lang let her get away with it. Until the English goal, time seemed to stand still during the labored lead-up to Correa’s goal kicks. When she had the ball in her hand, she stretched the legal limit of seven seconds another three or four ticks of the clock on at least two occasions.

She wasn’t the only Argentine player taking advantage of Qin’s blindness to the laws of the game. On free kicks -- both England’s and their own -- the South Americans dallied and dithered so long that you expected some reaction from the crowd, or the England players at least. Yet there was nothing. Too early in the game. That’s why this was a master-class in anti-coaching from the experienced Carlos Borrello. If you start wasting time early enough, a referee will seemingly not see fit to penalize the offense.

Borrello’s other tactic was a formation akin to a 4-6-0. His team was content to push England out wide, where Parris, combining on the right with Lucy Bronze, and Beth Mead on the left with Alex Greenwood, threatened to excel in the early stages. Far too often, though, the killer final pass or cross was missing, or the finishing was off. And when Greenwood was felled by Ruth Bravo for an England penalty after taking a pass from Mead just before the half-hour mark, Correa’s superb save denied England the lead demanded by their dominance.

Tellingly, the English finally broke through on a counter-attack. Argentina had made a rare but promising foray into the England half, but when they lost possession they were for once outnumbered at the back. Kirby’s swift pass found Mead on the left, and her precision pass in to the middle was turned in by the previously wasteful Jodie Taylor. The patience that England coach Phil Neville had preached paid off against what his captain Stephanie Houghton accurately praised after the game as a “very physical, very well-organized” side.

What did Argentina have to offer after two and a half hours of defense? In truth, there was no Plan B. The Argentines seemed to know that if they pushed forward, they would be caught out again. In the 80th. minute Florencia Bonsegundo dispossessed Bronze and there was a chance for a break. But most of her teammates failed to react, they were quickly outnumbered, and possession was lost.

That’s the other thing about the 24-group format. Like Argentina, you can go into your final game with a single point, and without having scored, yet still be in with a good chance of progressing to the next round. That may not make the group phase necessarily attractive to watch, but it makes it interesting to study.

As for England, this was a satisfactory night’s work. The Lionesses have won their opening two games and, aside from the tired second half against Scotland, they’ve looked good while doing so. The feeling is that when the opposition gets better, England may get better too. Against more evenly matched opponents who may provide them with a little more space, this fast and fluid team should continue to thrive, backed by its steady and experienced defense. Don’t bet against them turning up for a semifinal date with the USA on July 2 in Lyon.