Dispatch from Valenciennes: Dutch fans ramp up the atmosphere 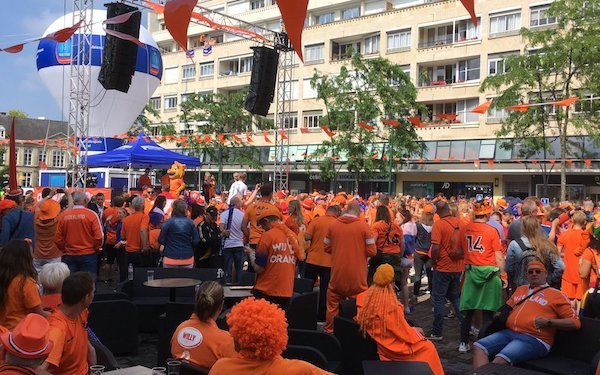 The Dutch brought to Valenciennes what any team should bring to a major tournament – color, noise and exuberance. In the downtown fan zone, they were drinking, dancing and singing on Saturday morning an hour before midday. It was the supporters’ version of what the team did to the 2017 European Championship, when they took the game by attacking force and rampaged across the finishing line as worthy winners.

Can the Dutch do the same on the field for this World Cup? Their defense is not the youngest, but the team boasts enough attacking talent to make them worth citing as outsiders. Dutch fans delight in spurring on their team, backed by a cheery sing-along brass band, but they verge on the ecstatic when Shanice Van de Sanden and Lieke Martens get the ball out wide and take players on. Given the tendency of both England and Germany to combine and create their best chances from out wide, this may become the World Cup of wingers.

Indeed, both Martens and Van de Sanden had early moments against a patchy Cameroon team, but then faded out of the first half. The former skipped past two defenders, but like an elated gambler on a streak she then lost the ball trying to beat a third. Van de Sanden frequently found space down the right, prodigiously served by the first half’s best player, Desiree Van Lunteren, but the winger with the leopard-skin hairdo twice lost her footing and skewed her crosses, eventually prompting her to change her cleats.

It was a strange, scrappy and increasingly nasty first half characterised by needling, moaning and some less than pristine challenges. Cameroon’s Genevieve Ngo Mbeleck was lucky not to be red-carded for a high follow through on Jackie Groenen – another example of lenient refereeing at France 2019. Cameroon’s captain Christine Manie also saw yellow for a crude challenge on Vivianne Miedema, while Gabrielle Onguene, after an incident involving the Dutch bench, was subject to concerted booing from the Dutch fans for the rest of the game. Both teams gave the ball away, hoofed the ball away, or seemed clueless about what they wanted to do with the ball when they actually managed to keep it.

Van de Sanden’s new shoes surely helped when she finally lent the game the class it was sorely missing just before half-time. After she played a neat one-two on the right with Jackie Groenen, her perfect cross was headed sharply home by Miedima. The Oranje fans were still celebrating, though, when the goal was cancelled out by Onguene – their nemesis latching on to a lovely through-ball to head over the advancing Sari Van Veenendal and then poke the ball home. These two moments of proper soccer just about wiped clean the memories of all that had gone so badly before.

The Dutch regained their lead straight after half-time on a well-worked free kick that saw Dominique Bloodworth get a second chance to finish from close range after Michaela Abam failed to clear Van Lunteren’s cross. While the second half unfolded less contentiously, there was still plenty of physical stuff. Van Lunteren was lucky to get away with body-checking Onguene, who lay motionless after the challenge and needed treatment – lax refereeing again from Casey Reibelt. Raissa Feudijo took Cameroon’s third caution for clattering the nimble Martens. The Dutch support continued to boo Onguene’s every touch, perhaps inspiring her driving solo run in the 81st. minute to set up Henriette Akaba for Cameroon’s best chance of the half. Her poorly executed shot was deflected just wide.

Miedema finished the game off decisively with a ballistic effort five minutes from time, served by nice approach play from Lineth Beerenstyn, who had livened up the Dutch attack when she came on for the tiring Van de Sanden. The Bayern Munich forward is a busy, bustling handful to be able to bring off the bench, adding to the many offensive options the Dutch have. Are these options enough to take them into the latter rounds?

They join a growing list of teams through to the final 16, having taken six points from two games, but for long stretches of this match they were just as awful as their opponents. Their distribution was often sloppy, and individual moments of flair couldn’t compensate for the lack of combination play. When they worked together, though, they scored. Against an inferior team, that was enough.

Winning this group ahead of Canada would likely get the Netherlands a game against England or Japan in Rennes – a long way out west even for their loyal support. Finishing second would mean the runner-up in the U.S. group – possibly the USA, more likely Sweden – in Paris, where they’d almost certainly have more fans. That might be its preferred outcome. Cameroon, with zero points after two games, must rely on other teams and then beat New Zealand, and beat them well, if they’re to avoid going home after the group phase.

Despite their unfair barracking of Onguene, its fans are reason enough to want the Netherlands to keep progressing. The USA and England both have large followings here, but they are way too quiet and have a tiny range of chants and songs. The Dutch, like the host fans, will drive their team on in every game, from first whistle to last. It’s magnificent to hear, just as – on a handful of occasions today – their team was magnificent to watch.
netherlands, women's national team, women's world cup
2 comments about "Dispatch from Valenciennes: Dutch fans ramp up the atmosphere".
Read more comments >
Next story loading