The USA showed off its depth as Coach Jill Ellis made seven changes to the starting lineup from the 13-0 win over Thailand and the Americans beat Chile, 3-0, in their second Group F game. Ellis swapped the entire frontline and center forward Carli Lloyd's two goals sandwiched a header into the net by Julie Ertz, who moved back into the midfield after playing on the backline against Thailand. Chile, which lost its opener 2-0 to Sweden, was spared of a more lop-sided scoreline thanks to its agile 6-foot-0 goalkeeper Christiane Endler and a missed penalty kick by Lloyd. Going into its final group game, on Thursday vs. Sweden, all 20 U.S. field players have already seen action in France. 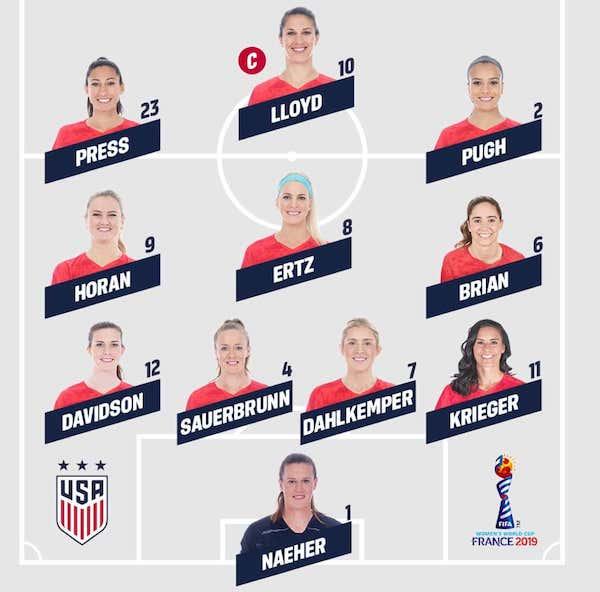 In a game that was played mostly in Chile's half -- the USA had about 70% of the possession -- no Chilean shot reached Alyssa Naeher. She did snatch Chile's only corner kick and a low cross.

The USA's youngest player, 20-year-old Tierna Davidson, started at left back. Rarely tested defensively, Davidson passed crisply and smartly, and delivered the corner kicks for the USA's second and third goals. Right back Ali Krieger, part of the passing sequence before the first goal, combined well with Morgan Brian and Mallory Pugh on her wing and shut down two Chilean counterattacks. Central defenders Abby Dahlkemper and Becky Sauerbrunn enabled the midfield to focus on offense.

Morgan Brian delivered a low pass across the goalmouth, after receiving a cross-field pass from Davidson, in the third minute that Lloyd nearly poked over the goal line. Brian sent a wonderfully chipped pass to Christen Press for a chance in the second half. Julie Ertz , who ran the U.S. midfield that overwhelmed the Chileans, scored her goal with an extraordinarily well-struck header. Lindsey Horan, like Ertz, made sure the Chileans didn't find midfield space. Horan picked up a yellow card for an rash midfield tackle that will hang over her through the quarterfinals, after which players get a clean-slate. (Two yellows = one-game suspension.) Horan shot high in the 54th minute and in the 55th should have roofed it into the net, instead of shooting low for an Endler foot save, after Press had delivered the perfect pass.

In its 2-0 loss to Sweden, the Chileans didn't concede until the 83rd minute and in stoppage time. Fending off the USA's waves of attacks proved much more difficult. Carli Lloyd hammered in a 17-yard half-volley in the 11th minute and scored with a header to make it 3-0 by halftime. Lloyd did some impressive midfield playmaking in the second half and hit crossbar with a 70th-minute header. Lloyd came up short of a hat trick when she hit her penalty kick wide. Christen Press' left-wing forays had the Chileans on their heels throughout. Her terrific volley in the 57th minute and her 66th-minute header were well-saved by Endler. Mallory Pugh faked out Maria Jose Rojas in the 66th minute and delivered a cross that led to the Endler save on Press' header, but that was a rare example of Pugh beating a defender one-on-one. Her efforts did lead to U.S. corner kicks, of which the USA had a remarkable 15.

Jessica McDonald joined Press in taking a spectacular shot that didn't find the net. McDonald's 62nd-minute shot from the far edge of the penalty area curved onto the far post. Allie Long committed what certainly looked like a reckless foul four minutes after receiving a yellow card.

TRIVIA. Carli Lloyd became the first player to score in six straight Women's World Cup matches. At the 2015 World Cup, she scored in the final (a hat trick in the 5-2 win over Japan), in the semifinal (2-0 over Germany), in the quarterfinal (1-0 over China) and in the round of 16 (2-0 over Colombia). At this World Cup, she scored once in the 13-0 win over Thailand in the USA's Group F opener. The 36-year-old's second goal against Chile was her 10th World Cup goal, moving her into third among U.S. players behind Abby Wambach (14 goals) and Michelle Akers (12). 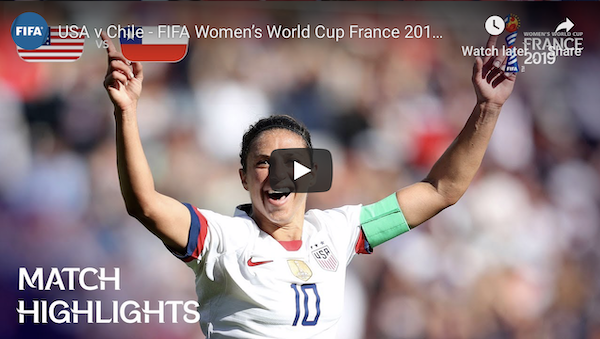