Interview: Tab Ramos on his young team that dictated play at the U-20 World Cup

The USA is the only nation that has reached the quarterfinals of the last three U-20 World Cups. At the recently completed U-20 World Cup in Poland, the Tab Ramos-coached USA fielded the fourth youngest team among the 24 participants, after Senegal, Tahiti, Mali. It also had the lowest median age of a U.S. team at the biennial tournament since 1983, when Ramos was a 16-year-old on a squad that included Hugo Perez and Paul Caligiuri. Ramos has coached the USA at the last four U-20 World Cups. In Poland, the USA's three victories included a comeback win over favorite France. 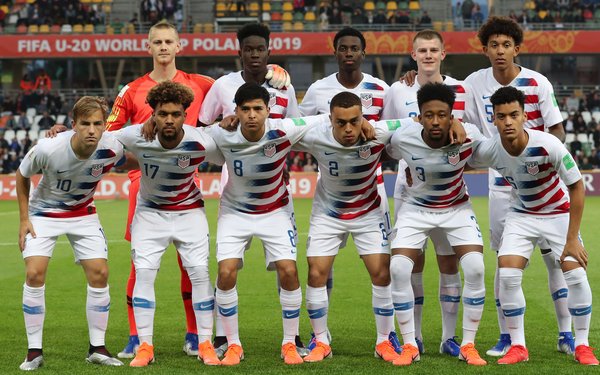 After the USA opened with a 2-1 loss to Ukraine, it beat Nigeria, 2-0, and Qatar, 1-0, to finish second in Group D. The USA beat France, 3-2, in the round of 16, then  fell, 2-1, in the quarterfinals to Ecuador, which finished third while Ukraine lifted the title on Saturday with a 3-1 win over South Korea.

SOCCER AMERICA: Is the fact your team's two losses came against the teams that finished first and third significant?

TAB RAMOS: Not for us, because I believed in our team and I thought we were as good as anyone.

SA: What are your general impressions about the USA's performance?

TAB RAMOS: Great. I'm very happy with the team. I'm not big about speaking to teams after the game in the locker room. I like for everyone to cool off and have their own thoughts. And then we meet at the hotel after games.

But after the Ukraine game [the 2-1 Group D opening loss] was really the only time when I spoke to the team in the locker room in last eight years. What I said to the team was that I was really happy with how they played and to keep their heads up. Because we would likely not lose another game and we would meet Ukraine again.

The fact that we got this far and the fact that we were as competitive as anyone, and that we could have won, I think that's just the beginning. When this thing starts out, it's 200 teams [aiming to qualify for the 24-team tournament]. Many nations have teams that can win it: Brazil, Spain, Germany, France, Argentina, Uruguay, Belgium ... And at the end, only one team wins.

Just because you have a team that's capable, it doesn't mean you're always going to do it. Now we're here, and that's a good thing. I think we're starting to knock on the door and I think that's a really good sign. I'm really happy about that.

SA: Hindsight is 20-20, but are there any tactical choices or player selections you've reevaluated?

TAB RAMOS: You're always reevaluating after every game, but every game plays out differently. That's the great thing about soccer. Just when you think you're counting on something to happen, it can change, and you have to react to the things that change. Knowing everything we know, I think it would be not smart to say I would do things exactly the same, because then the outcome would be exactly the same. I would likely change something had the opponent given us what I know now they gave us.

But our preparation was very good. I'm very happy with the way we prepared. And I'm happy with the team selection. So at this point I can only think from where I was at the moment and I think we picked the right team.

SA: One had the impression that Josh Sargent wasn't on the U-20 World Cup roster because he was going to be with the full national team for the Gold Cup, but Gregg Berhalter ended up not naming Sargent to the Gold Cup roster. Should he have been with the U-20s?

TAB RAMOS: I don't know, because that's a question I think you need to ask Josh. I know that Tim Weah really wanted to be with the U-20s and he was the first one to push for it. And I think it was a value to Tim, because he did really well. He showed his quality at the tournament and that was great. ... I had a conversation Gregg and I selected the guys who were available.

SA: How would you rate this year's team to the 2017 team, which also reached the quarterfinals?

TAB RAMOS: I think we were a better team this time because unlike the other times, every game we played this time, we played it under our rules, we played our game. With past teams we did just as well results-wise, but we didn't dictate like we did this time. ... And we were a really young team. We had only one 99 [Paxton Pomykal] on the field against Ecuador.

SA: In the quarterfinals you played a France team that was one of only two teams at the tournament to go 3-0-0 in group play, the next generation of players from reigning senior World Cup champions, with a roster valued at $200 million. How'd you make sure your players were confident?

TAB RAMOS: We obviously had seen France play and they have special players in every position. If you look one-by-one, I wasn't going to lie to our players and say France wasn't the best team in the U-20 World Cup, because they were, player by player. But I also know France doesn't win the U-20 World Cup every time. They lose to somebody, and that's what I told the players. That France is going to have that game that they lose, and it might as well be to us, because we're ready for it.

SA: Did playing them in a friendly, a 2-2 tie, before the tournament help?

TAB RAMOS: It helped a lot, actually, because we knew we were going to be successful with our press against them. I think they probably didn't expect us to do it in a World Cup game. They probably thought we did it because it was a friendly game a couple months before the World Cup.

SA: Which U.S. players fared particularly well in the tournament?

TAB RAMOS: We definitely had three players that I thought could start for every team at the World Cup. One being Chris Richards in the back, Paxton Pomykal [in midfield] and Tim Weah [upfront]. I think those three guys could have started for any team in that World Cup. And then you have other guys. Alex Mendez didn't play his best but obviously he's very good. You have Chris Gloster, who's very good until the last game. Sergino Dest was a little bit up and down, but when he's at his best, he can play for anyone. But those three guys consistently can play for anyone.

SA: If we agree that the current generation of American teenagers -- based international results and the increasing number who are signing pro contracts at a young age -- is showing more potential than ever, what do you attribute that to?

SA: What about the benefits of young players playing with and against adults more often, whether it's breaking into first teams, playing for MLS clubs' USL affiliates, or spending time practicing with the first team?

TAB RAMOS: That's huge, to be in an environment where they're playing against men more often. Using their bodies, fighting for every ball. That helps a lot.

SA: You were in Florida during the Concacaf U-17 Championship at which the USA qualified for the 2019 U-17 World Cup with a runner-up finish to Mexico. What's your impression of that team?

TAB RAMOS: I think we have a really good team. I think we're going to do well at the World Cup [in October] because we have a lot of talent on that team. And the more time Rafa [Raphael Wicky] has with them I think they'll understand him better and the team will get better.

SA: The players made a smooth adjustment to Coach Raphael Wicky, who was hired less than two months before the tournament after this cycle of U-17s had three different coaches?

TAB RAMOS: The team was already used to playing exactly the way they played. They played 4-3-3. Dave van den Bergh had it that way. Shaun Tsakiris had it that way, and John Hackworth before that.

TAB RAMOS: That's my contract. It's been four amazing U-20 cycles so far. I'm happy in my job. I believe I have been making a difference and have moved the youth national team program forward. Having said that, in this business you never know.

u.s. under-20 men's national team, under-20 world cup
14 comments about "Interview: Tab Ramos on his young team that dictated play at the U-20 World Cup".
Read more comments >
Next story loading