The USA opened its Gold Cup campaign with a 4-0 win over Guyana, the lowest rated team (177th in the FIFA World Ranking) in the 16-team tournament. Although a U.S. win never seemed in doubt -- Guyana's first shot on goal came with the USA up 3-0 -- Coach Gregg Berhalter's team was more often scrappy than smooth. Tyler Boyd, who recently switched from New Zealand to the USA, scored twice for the USA. He and Paul Arriola delivered the evening's standout performances. 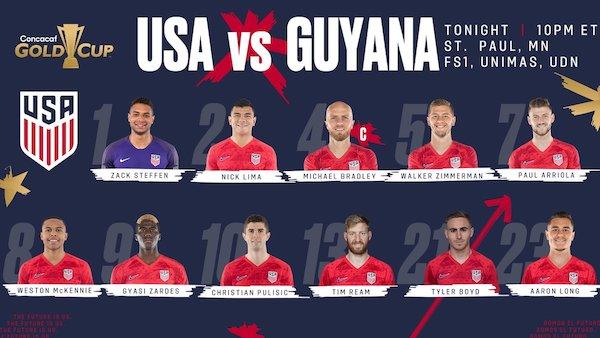 Keanu Marsh-Brown's shot from 18 yards was batted away by Zack Steffen in the 69th minute, leading to one of only two corner kicks for the Golden Jaguars.

Nick Lima combined well with Tyler Boyd on the right flank, starting the third minute with the first of many crosses sent in by Lima and Boyd. One of Lima's crosses presented Christian Pulisic with a close-range header he struck poorly. Lima's 44th-minute shot forced a save that bounced to Boyd for close-range chance not finished. Central defenders Aaron Long and Walker Zimmerman get credit for making Steffen's night so easy and hit good cross-field balls to wingers. Tim Ream, who played with poise as usual, got the left wing foray going on the first goal.

Michael Bradley's sideways and backward passes were fine. His forward ones not so much -- until the 51st minute when he delivered a perfectly weighted cross-field ball to Tyler Boyd on the 2-0 goal, a sharp low strike inside the far post 14 yards. Wingers Paul Arriola, who scored the first goal, and Boyd, who also made it 4-0, provided most of the U.S. offense. Arriola's opening goal impressed for its crisp narrow angle finish and the distance he ran to get on the end of the give-and-go with Weston McKennie, who passed back perfectly. Arriola assisted on Boyd's second goal. (The blemish on Boyd's performance: three clear shots on goal squandered.) Arriola's 55th-minute shot led to the third goal. Christian Pulisic dazzled on the dribble early in the game but passed poorly. He shot the ball into goalkeeper Akel Clark's chest on his best scoring chance, and went for long stretches without seeing the ball. In fact, Pulisic, Bradley and McKennie -- in their first start together -- hardly combined. The attack worked nonetheless with its emphasis on wing play, but against more formidable foes a more cohesive central midfield will be needed. McKennie, who committed five fouls but escaped a persistent infringement yellow card, was subbed with an injury in 74th minute.

Gyasi Zardes scored a blooper goal when Arriola's shot banged off defender Terence Vancooten into Zardes' face and into the net. It wasn't the only time Zardes was accidentally effective. He slipped while shooting in the 27th minute and his blocked shot provided Pulisic a close-range chance. A more coordinated effort would have seen Zardes finish an 11th-minute header and the ball that Pulisic failed to head on goal in first-half stoppage time. Zardes also scored a 20th-minute goal called back because he was offside by a foot.

Wil Trapp lofted the long pass to Arriola on the fourth goal. Cristian Roldan shot wide after entering in the 63rd minute.