Dispatch from Valenciennes: The World Cup field is leveling out 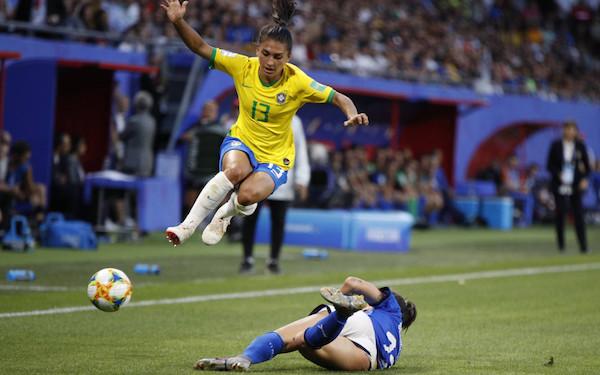 It wasn’t a classic, and there was only one goal, but Italy against Brazil was something we’ve seen little of so far in this 24-team tournament – an even game that either side could have won. No steel-curtain defending for 90 minutes, no one-sided chicken shoot, rather this was the kind of balanced but intense contest we’ll hopefully see more of in the final two and a half weeks of play. Brazil won the game, but Italy won the group.

Even more pleasing was the old-fashioned refereeing performance of Lucila Venegas, who whistled an impeccable game. It’s odd to focus on the fact that the referee was competent, but it’s suddenly become a pertinent issue. Not once did we hear from the VAR all evening, although Venegas likely delayed the decisive penalty for a few seconds just to double check.

That shouldn’t have been necessary. Her perfect positioning on the 72nd minute play allowed her to reach a quick, correct decision – Elena Linari clearly blocking Debinha’s darting run into the penalty area. The Italians protested, presumably hoping that the VAR might somehow burnish them with a reprieve on some fastidious pretext. Thankfully, there was no intervention this time, and Marta converted the spot-kick for the game’s only goal.

Venegas clamped down on physical play early on, something largely absent from the officiating up until now. Leticia Santos saw yellow in the 12th minute for a foul on Barbara Bonansea, while Elisa Bartoli went into the book three minutes later for sliding in recklessly on Debinha. It was reassuring to see two of the most positive players on the field receiving official protection.

Indeed Italy and Brazil boast several skillful players, but lack a disciplined way to coordinate them. While there’s bags of charisma on both sides, and plenty of will to initiate attacking moves, the game was also littered with needless loss of possession, breakdowns, poor first touch, loose balls and over-hit passes. But the first half especially was nonetheless exciting to watch. Italy produced two clear chances to Brazil’s one – Debinha’s delightful back-flick from a corner-kick that prompted Laura Giuliani into a stunning reflex save.

At the other end it was Barbara versus Barbara. Bonansea’s probing low shot was turned around the post by her Brazilian namesake, while her sharp volley went straight at the goalkeeper after a flowing counter-attack down the right orchestrated by the excellence of Alia Guagni. In the second half, though, only Brazil looked like scoring. Andressinha clipped the Italian bar with a free-kick, while Kathellen headed inches wide from a free-kick - set-pieces are one of the Brazilian strengths. Then substitute Beatriz, on for the quiet Cristiane, almost scored with her first touch, but glanced the ball just wide with the outside of her left foot.

Italy did have the ball in the net in the 29th minute, when Cristiana Girelli received an Aurora Galli back-header, and juggled it nicely past a defender before completing the move with a deft finish. The Italian fans began to celebrate, but it was correctly cancelled out for a very clear offside. As has become the norm in this World Cup, however, the flag didn’t come until some seconds after the offside infringement, when the ball was already in the back of the net.

This is becoming as problematic as the VAR interventions. FIFA’s wonky reasoning is that the ARs should now always wait to flag in case a goal is scored and it somehow wasn’t offside after all. Yet in so many cases, when the player is a yard or more beyond the second to last defender, it’s pointless to wait for a goal to be scored, only then to disappoint all those fans who are not sitting at an angle to see that the goal was obviously not going to count. Or should fans now all delay their celebrations for a few seconds after the ball’s gone in, just in case that late, late flag is raised?

These delays are a painful side-effect of VAR. The cheers of the Italian fans turned to boos and jeers. They shouldn’t be aimed at the match officials, but at whichever panel of Zurich technocrats came up with another dumb directive that’s sucking the joy out of being a supporter.

Anyway, thanks to Australia’s 4-1 win over Jamaica, Brazil finished third in this group and must now play either Germany or France in the round of 16. Both of those opponents will likely be too strong for such an aging, error-prone team. Australia faces Norway, while Italy will probably play either China or Nigeria – two opponents they are capable of beating but, on tonight’s showing, may have difficulty in breaking down. Expect extra-time and penalty shootouts. If the VAR intervenes, expect those shootouts to finish just in time for the quarterfinals.

brazil, italy
5 comments about "Dispatch from Valenciennes: The World Cup field is leveling out".
Read more comments >
Next story loading