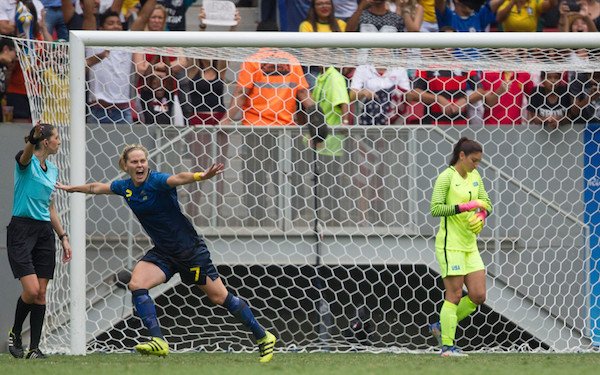 The USA and Sweden meet Thursday at the Stade Oceane in Le Havre to decide first place in Group F and a date with Spain on Monday in Rennes -- and the potential soirée of the tournament against host France on June 28 in the quarterfinals.

Both teams are through to the round of 16 with wins in their first two matches. The USA will claim the Group F title with a win or loss; Sweden will take first if it wins.

Hedvig Lindahl was Sweden's goalkeeper in 2011 and 2015 and also in 2016 when the USA lost to Sweden in a shootout after their Olympic women's soccer quarterfinal match ended in a 1-1 tie.

“They don’t have that mental advantage they might have had before when we hadn’t managed to beat them," Lindahl told FIFA.com's Swedish reporter ahead of Thursday's game. "Now we know that we can."

Kosovare Asllani started for Sweden in the 2015 and 2016 matches and is its leading scorer at the 2019 World Cup with goals in each of its first two games.

"We always perform well against USA," said Asllani, who played with the Chicago Red Stars in 2010.

Indeed, Sweden is the only team that has played the USA evenly in recent years with a .500 record -- three wins, three losses and four ties -- in their last 10 meetings.

In 2016, Lindahl was excellent during the 120 minutes, then stopped Alex Morgan on the first U.S. attempt and watched as Christen Press missed on the fifth shot of the shootout. Lisa Dahlkvist then converted for the Swedes whose 4-3 victory ended the USA's string of three straight Olympic gold medals.

Press, whose career took off when she went to Sweden in 2012, said on Wednesday that the 2016 match serves as motivation for the U.S women in France just as she learned the shootout loss to Japan in the 2011 World Cup final that she was not a part of was a motivation for the U.S. women in 2015 when they won.

"Despite the fact that it's been three years, you don't forget the taste in your mouth when you fail and when you lose in a world championship," Press said. "And I think there's a little bit of that that will definitely act as motivation. And you always play to win and not having that feeling."

Press learning from the penalty kick miss allowed her to build character and not get down after small day-to-day setbacks.

"I think when I look back on my career," she said, "all the moments that I'm most proud of have come after failure. That's the easiest one to point at and look at, and look at that clear failure, and then evaluate how I did in responding to it. I think the strength that it takes to step back up and be courageous and let it go, and to continue to fight for your dreams and not let the outside noise affect what you're doing, I think I am very proud of that."