In a matchup between two teams that had already clinched passage into the knockout stage, the USA scored early in both halves for a 2-0 win over Sweden. Although by far the most highly rated of the USA's Group F foes, the Swedes -- who started four players who hadn't yet seen action at this World Cup -- hardly impressed beyond their grit. The USA faces Spain in the round of 16 on Monday. 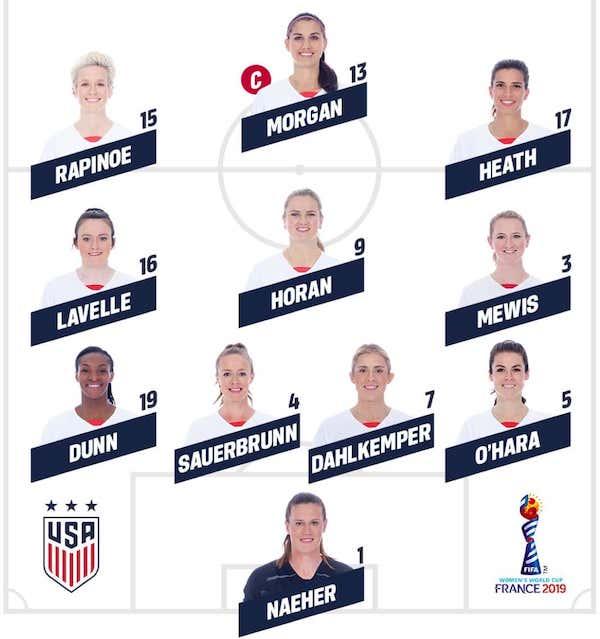 Another game without Alyssa Naeher getting a real test, although the two shots that came at her had some pace. She flailed at Kosovare Asllani's free-kick cross but it flew too high for the Swedes as well.

Kelley O'Hara's hard-nosed defending got reckless a couple times. She was yellow-carded in the 59th minute and got away with clattering into Amanda Ilested in the U.S. penalty area. O'Hara, more so in the first half, moved up to combine with Tobin Heath and Rose Lavelle. On this day, Abby Dahlkemper's long balls out of the back weren't working. She and central back partner Becky Sauerbrunn kept the Swedes from having any serious chances. Crystal Dunn shut down Sofia Jakobsson and surged forward on the left. (Julie Ertz sat the game out with a minor injury.)

Lindsey Horan pounced into the goal area to stab home the quickest goal so far at this tournament. She also patrolled the midfield to allow others to attack. Sam Mewis, who got a touch on Megan Rapinoe's corner kick as it made its way to Horan on the first goal, supplied the best passes to the frontline. Credit Rose Lavelle for trying to attack down the middle a couple times, but none of her four shots threatened.

This first-string frontline did not look sharp after sitting out Sunday's 3-0 win over Chile. Megan Rapinoe misplayed several balls, but she won and delivered the corner kick that led to the first goal and the cross that led to the second. She also, from near the corner flag, hit a clever pass to Rose Lavelle at the edge of the penalty area.  Alex Morgan took two bad shots, ended a couple attacks with bad touches, took a knock in the 35th minute and was subbed at halftime. Tobin Heath's right wing work was ineffective in the first half because her passes missed. So early in the second half she shot from a narrow angle instead of seeking a teammate in middle. The ball deflected high off Jonna Andersson's foot and into the goal to make it 2-0.

In a game that the Swedes turned even scrappier after the USA's second goal, the subs had little impact. Carli Lloyd managed two shots, and should have finished in the 90th on Mewis' through ball, although Hedvig Lindahl's save was the best of the day. Christen Press exploited a rare moment when the Swedes didn't overcrowd the midfield after she intercepted a pass and stormed through middle, and dished it to Mewis on a play that ended with a corner kick.

TRIVIA 1.
This World Cup marks the first since 2003 that the USA won all three of its group-stage games. En route to the 2015 World Cup title, the USA opened with 3-1 win over Australia, a 0-0 tie with Sweden, and a 1-0 win over Nigeria.

TRIVIA 2.
This is the first World Cup at which the USA shut out all three of its group-stage opponents. 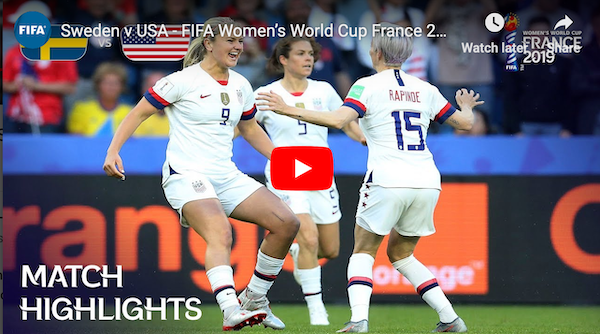