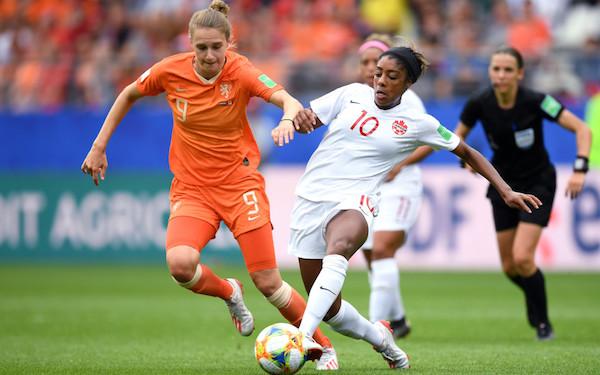 When two resistant forces collide, the result can often be stasis and stalemate. For the first 20 minutes of Canada’s game with the Netherlands this evening, it looked as though orange flair was going to be extinguished by white noise. Then things started to happen, in both penalty areas, and the result was one of the most engaging games of the World Cup so far. The Dutch won by a single goal in three, winning the group and edging this game thanks to extra strength from the bench.

A pregame perusal of the team-sheets, where both coaches resisted rotation, pointed to a stand-off. Yet these teams, with the Dutch leading the group only on goals scored, wanted to finish first to avoid the outside possibility of meeting the USA in the round of 16, should the title-holders later lose to Sweden. When the Dutch started creating chances towards halftime, the game developed into a series of fascinating duels between their heralded attack and the storied Canadian rear-guard.

For the Dutch, Vivianne Miedema, Lieke Martens and Shanice Van de Senden are all blessed with the individual brilliance to set any game alight, at any moment. The Canadian back-line, boasting the peerless Kadeisha Buchanan as its chief director, had conceded only one goal in 10 games this calendar year. Would something give, or was defensive talent going to negate offensive drive?

Let’s start with Miedema versus Buchanan in the center. The Canadian defender won the fight for the ball when Sherida Spitse’s lovely through-pass almost played the Dutch striker free. Miedema, though, later drew a yellow card on her opponent when Buchanan came through the back of her (even though the referee played an advantage that wasn’t there), and also turned magnificently in the box to strike Stephanie Labbe’s far post. Significantly, it was Shelina Zadorsky she turned and not Buchanan. Later in the game, Miedema’s other dangerous moment came when she turned Zadorsky, but Buchanan immediately swept up and intervened. Winner: Buchanan overall, but at the cost of a caution.

Out on the right, the feisty, mobile Van de Sanden was up against Allysha Chapman, while on the left Martens was taking on Ashley Lawrence – and vice versa when the play switched. Lawrence completely mastered Martens, although the number 11 had a shot blocked at close range when the ball fell to her after a Van de Sanden delivery was palmed on to the cross-bar by Labbe. Van de Sanden’s other telling cross was met by a Danielle Van de Donk overhead kick that that flew just over the bar. That, and a neat late through-ball to Miedema, were the right-winger’s three best moments – otherwise Chapman denied her space and telegraphed her characteristic sprints into space.

Winners on the wings:  Lawrence and Chapman. That Canadian defensive superiority. So how did they manage to lose this game?

Both Dutch goals had nothing directly to do with their talented forward trio. Their first goal was a set-piece on 54 minutes, delivered by Spitse and headed in by the center back Anouk Dekker. This was only justice for Dekker, who was yellow-carded in the first half for a non-existent foul on Janine Beckie, who went down very easily. The winning goal then came from Lenith Beerensteyn, a different kind of attacking talent altogether.

The bustling Bayern Munich forward had come in for the disappointing Martens with 20 minutes to play. Canada had leveled on the hour through Christine Sinclair’s finish from Lawrence’s pinpoint pass to the far post. Beerensteyn, who was also a major nuisance when she came on against Cameroon in Valenciennes last Saturday, ran at the Canadian defense, then laid the ball off to her right to the overlapping Desiree Van Lunteren. It was served back in to the substitute, who stepped in to score from close range ahead of … Buchanan. The goal was almost a reverse copy of the Canadian equalizer.

So, there’s the answer. When you devote all your defensive energies to neutralizing your opponent’s three most dangerous players, there’s always the chance that another player steps in to exploit the extra space and take up the slack. Beerensteyn is the ideal forward to bring off the bench when legs are tiring. She is strong both in the challenge and on the ball, and is the kind of player who always makes things happen when she’s on the field. I hope we see a lot more of her in this tournament.

• VAR Watch. In the first minute, referee Stephanie Frappart called a penalty for an apparent trip by Van Lunteren on Beckie. VAR Felix Zwayer invited Frappart to look again. The review showed that the foul (was there even contact?) took place outside the box, but the whole process took four minutes. Added time at the end of the first half? Three minutes. So, a sound call, but need it take so long? Why did Frappart need to run over and look at it when it was clear to the VAR what had happened? Thankfully, that was the last we heard from Zwayer.

* Canada without Sinclair. There’s a school of thought among Canadian soccer fans that it might be time to say goodbye to their brilliant captain and record goal scorer. Not because she in any way lacks quality or is slowing down at 36, but because the play is so focused on getting her the ball that the rest of the team is in shackles. For the final 22 minutes of this game, we were able to see a Canada without its captain and principal striker. In that time, it conceded the winning goal, but in the closing stages the North Americans did stretch the Dutch defense significantly more than it had during the first three-quarters of the match, with both substitutes – Jayde Riviere and Adriana Leon – conspicuously active. Sinclair is clearly still vital to this team. Nonetheless, a decent World Cup debut from 18-year-old Jordyn Huitema, who played the full 90, points the way forward.