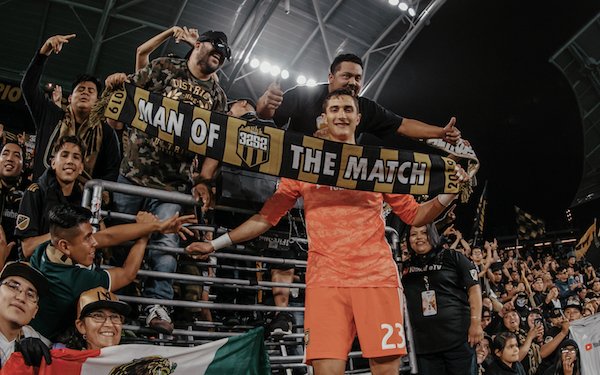 Los Angeles FC completed the final eight in the 2019 U.S. Open Cup with a 3-1 win over San Jose Earthquakes in front of 14,028 fans at Banc of California Stadium.

After Cristian Espinoza set up Valeri Qazaishvili to give the Quakes a 1-0 lead in just the seventh minute, LAFC pulled even and then ahead with three unanswered goals.

Uruguayan Diego Rossi tied the score just past the half hour mark then set up Adama Diomande with a perfectly placed through ball on the hour mark. In the 85th minute, Carlos Vela clinched the victory after he beat two defenders and placed a low drive through traffic into the left side of the goal.

The Quakes had plenty of opportunities, but 23-year-old Pablo Sisniega made eight saves to hold off them off. Sisniega was starting in place of Tyler Miller, who is with the USA at the Gold Cup.

Sisniega came to LAFC from Real Sociedad's second team in Spain. Both of his parents are former Mexican Olympians, but he also holds U.S. and German citizenship.

“[He made] excellent saves, three or four excellent saves," LAFC coach Bob Bradley said of Sisniega, "and I think everybody on the team is so excited for him. He’s come in, yes, he’s missed some time, he’s excited for this opportunity, Tyler has done a good job setting an example and also supporting Pablo. We’ve got another young goalkeeper, Phillip [Ejimadu] that’s gone out on loan to Tuscon.

Bradley praised his goalkeeper coach, Zak Abdel for his work with the LAFC keepers, in particular Sisniega.

"Zak tried to push him to change some things," he said, "and when you’re a goalkeeper and you’re 23 or 24 years old, that’s not always easy, but he’s worked really hard on it and we’re all so excited that in these two games he’s really played fantastic, looks confident, and tonight came through in a big way.