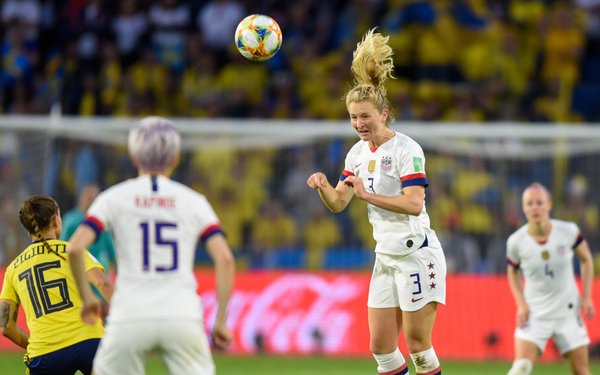 The USA's road to the Women's World Cup final four in Lyon leads through Reims and Paris, where it began its campaign.

First up for the USA will be Spain on Monday in Reims in the round 16. If it wins, it returns to the Parc des Princes in Paris to face the winner of France-Brazil four days later.

After a 13-0 win over Thailand in Reims and 3-0 win over World Cup newcomer Chile in Paris, Sweden provided the first test of the World Cup for the USA. The only problem: both teams were already through to the round of 16. The Swedes had no interest in going all out -- and finishing second behind the USA was certainly an acceptable option.

“We know that we have another match on Monday, a knockout match, and that’s the match that’s the most important one,” said Coach Peter Gerhardsson, who made seven changes in his starting lineup. “When we looked at the plan for the match and how to go about it, we didn’t think in advance that it was important to end up first or second in the group.”

U.S. coach Jill Ellis had already emptied her bench in the Chile game, making seven changes in her starting lineup and making sure she had played all 20 field players in the first two games.

Her main goal was to keep everyone healthy and card-free for the four games that remain.

Julie Ertz, probably the one player the USA cannot do without, sat out Thursday's game with a hip injury. Alex Morgan, who scored a record-tying five goals in the opener, was limping late in the first half after taking a knock and replaced at the half by Carli Lloyd.

“Alex took a knock in the first half, and I just think it was more of, ‘Let’s be smart about this,’ in terms of what we did,” said Ellis. “It’s a zero-risk game in terms of having players available for the next round for sure."

Three players will enter the knockout stage with yellow cards: Lindsey Horan and Allie Long, who picked up cards against Chile, and right back Kelly O'Hara, who was booked in the Sweden game. A yellow card in the Spain game or quarterfinal match will force them to sit out the next game. (Cards are wiped out after the quarterfinals.)

In 2015, midfielders Megan Rapinoe and Lauren Holiday were unavailable for the quarterfinal match against China after collecting their second yellow cards of the tournament in the 1-0 win over Colombia.

Those suspensions proved to be fortuitous. After struggling through the first four games, the U.S. midfield came together with the insertion of Morgan Brian and with the return of Holiday alongside Brian and Lloyd in the semifinals, the USA cruised to its third world title.