Dispatch from Grenoble: Germany unbeaten, unbreached, and getting better 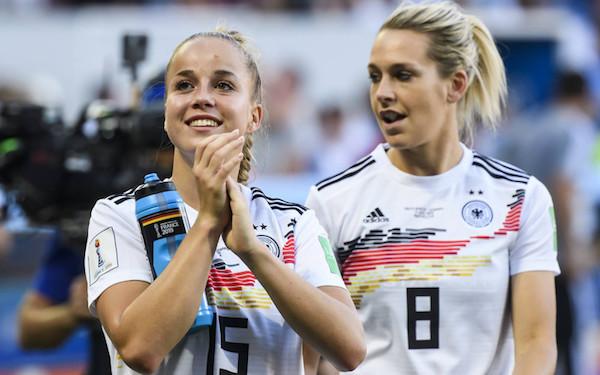 Germany’s women last won the World Cup 12 years ago. Although they are always bracketed as one of the pre-tournament favorites, their inclusion of late has been more out of habit than conviction. During this qualifying campaign they stumbled by losing at home to Iceland. And yet, after comfortably beating Nigeria 3-0 today, they have gone four games in this tournament with four victories, scoring nine goals, and conceding none. More alarming still for the rest of the field, as a team they look more cohesive and more confident with each 90 minutes.

Their first two group games against China and Spain were narrow victories where their defensive frailties went unpunished thanks to poor finishing and the odd goalpost. Against Nigeria, there were few signs of those glaring mistakes that the Chinese and the Spanish failed to exploit. Marina Hegering was flawless at center back, and any time the Nigerians – who set out in positive mood – came close to Almuth Schult’s goal, they were barred by that extra notch of savvy and experience.

During those early games, the backline had been plagued by mediocre distribution. After half-time today, captain and striker Alexandra Popp was withdrawn to a defensive midfield role just in front of the backline, where she launched a series of inch-perfect passes long and wide. So, that’s another problem solved. And although they led 2-0 at the break, it was during those second 45 minutes that the Germans looked most assured in their passing, and in dealing with the increasingly tired threats of their opponents. Lea Schueller snuffed out any doubts about the game’s outcome when she fired home a first-time shot to make it 3-0 in the 82nd minute, jumping on an awful misplaced pass from Halimatu Ayinde on the edge of her own area.

That was Nigeria’s problem. For all their nice individual touches, a moment of genius was almost always followed by a crass error. Midfielder Ngozi Okobi was wonderful in flashes, but no sooner would she turn a player and make a pass than one of her teammates would be let down by a poor touch. Coach Thomas Dennerby was nonetheless a lot happier after the game than he had been after the VAR-driven defeat against France. “We showed the world we have a team that’s improved a lot,” he said. “We are not satisfied, because we are not ready yet. But to play a game like this is extremely important for the future, and to learn that you will be punished for the smallest mistakes.”

In the first half, his side came out looking a lot more positive than they did against France (Dennerby: “We had to take some risks”). In the first minute, they forced a corner and had a shot on target from Francisca Ordega, easily saved by Schult, but already a more positive tally than during the entire game against France. In midfield, both captain Desire Oparanozie and the quick-witted Okobi initiated a number of forward moves. When it came to getting shots off where it counted, though, the German defense bristled with experience. There was always a white shirt there to block, tackle or chivy at the vital moment.

Were Germany worth a two-goal lead by the break? Not necessarily on the balance of play, but certainly on the balance of chances and the crudity of some of Nigeria’s defending. Popp’s opening goal was just too easy, as she found herself free to head home from six yards out from Lina Magull’s corner – one of the “small mistakes” referred to by Dennerby. Another was Evelyn Nwabuoku’s industrial challenge on Magull, which could have put the German midfielder out of the game, and represented a welcome example of VAR intervention bringing justice to a scene somehow overlooked by referee Yoshimi Yamashita.

German coach Martina Voss-Tecklenburg said she was “completely happy” with her side’s performance. Captain and MVP Popp said that in the second half her team had been “in complete control." Schult ominously described Germany as “a tournament team.” adding that “we showed today that we can play a bit of soccer, and hopefully in the next game we’ll show a little more.”

Germany faces the winner of Sweden-Canada in Rennes on June 29, with two days of extra rest on their opponents. The former title-holders are in this tournament for at least another week, and quite possibly another two.

VAR Watch. The three minutes it took to determine that Svenja Huth, standing offside, had not interfered with play on Germany’s opening goal were three minutes too long. The on-field referee should have been able to say with immediate certainty that this had not been the case. “We didn’t know what we were waiting for, neither the players nor the coaches,” said Dennerby. And he refused to blame VAR for his team’s defeat: “Germany scored three times, we did not score.”

The review for Germany’s penalty was a good call, although once more it took at least two minutes out of the game, and once again too little added time was given at the end of the first half (four minutes, when it should have been at least six). The pause for mistaken identity on Germany’s yellow card (Popp, not Giulia Gwinn) was relatively painless, as was the ludicrous Nigerian appeal for a handball penalty in first-half stoppage time against Gwinn. If that had been given, I think I’d have walked out the stadium and given up on soccer for good.

“For the really critical things, of course VAR is OK,” said Dennerby. “Penalties and balls across the line. But we haven’t found the final solution for VAR yet.”

Germany without Dzsenifer Marozsan. It was hard to say that Germany missed Marozsan, especially once Popp took over that passing role as deep-lying playmaker. Still, if you want one more reason to think that Germany may lift the Cup, Marozsan is already back in training as she recovers from a broken toe sustained in the tournament’s first weekend against China. And she has another week to get ready for the quarterfinal.

Mexican Wave Watch. Number of circuits of the stadium it takes before the crowd gets bored – three. Still at least two too many.