The USA started strong in its second Gold Cup game but didn't hit the net until late in the first half. The floodgates opened in the second half and a 6-0 win over Trinidad & Tobago clinches a spot in the quarterfinals for the USA, which finishes group play on Wednesday against Panama.

Of Zak Steffen's three saves, two arrived in the center of the goal but were hit powerfully, and Alvin Jones' long-distance free kick seemed to take a deceiving path. It took a diving save to stop Kevin Molina's 22-yard shot, for which Steffen was well-positioned.

Right back Nick Lima, who often turns into a midfielder, gets Assist of the Month for delivering the ball to Gyasi Zardes with a diving header on the USA's second goal. Not all of Lima's wing work succeeded -- and his shot late in the first half may have flown out of the stadium -- but he delivered a fine cross to Christian Pulisic in the 65th minute as the USA was taking over complete control of the proceedings. Central defender Aaron Long scored the USA's first goal with diving header and its sixth by chesting the ball over the line. Long, who struck a particularly impressive long-distance pass to Lima in 32nd minute, adeptly carried out his duties on the USA's end of the field as well. Very much of T&T's attack consisted of long, high balls, most of which ended up headed clear by Walker Zimmerman. The only time T&T managed a shot near the U.S. goal, Tim Ream blocked Levi Garcia's effort. Ream's passes included setting up a Tyler Boyd shot and a Paul Arriola breakthrough.

A major improvement was revealed early in the game as Christian Pulisic consistently received the ball, thanks to Michael Bradley's sharp passing, and the connection between Pulisic and Paul Arriola on the left wing. On the right, Tyler Boyd ensured that the Soca Warriors were pressured from both flanks. Boyd, who scored twice in the 4-0 win over Guyana, had no luck with his five shots against T&T. He tied Khaleem Hyland in knots to get a clear shot in 15th minute but it flew straight to the goalkeeper. Weston McKenni, who hit a cunning pass to Arriola that the winger should have turned into a goal and took the shot that led to Long's second goal, fiercely patrolled the midfield. But self-control is still lacking. His five fouls included unnecessary clashes in the T&T half and he got yellow-carded for interfering and escalating an incident that didn't concern him. Arriola's miscues -- poor shooting and a shot he skied out of bounds with three teammates in the penalty area whom he could have served to their feet -- delayed the rout. But he stabbed home the fifth goal and was well involved during the USA's late-game waves of attack. Bradley truly orchestrated the U.S. game with his superb and at times clever passes, one of which went to Lima on the second goal. Pulisic's curving ball across the penalty met Long on the first goal, he sliced through T&T to assist Zardes' second goal, and coolly scored from close range. He capped his evening off with a dazzling nutmeg.

For much of the game it looked like Gyasi Zardes would put in a good day's work by being a target in the heart of T&T's defense, getting the ball, then dishing it back to midfielders for them to shoot or swing it out to the wings. He did just that in the 66th minute, but this time he was on the end of the sequence to make to 2-0. Three minutes later, he bent in a shot from 16 yards to make it 3-0.

Jordan Morris assisted twice. He picked out Pulisic after patiently keeping possession in the penalty area until Pulisic arrived. His service to Arriola made for the easiest of finishes. He also delivered a neat chip into the center that McKennie acrobatically mis-hit. Jozy Altidore got the ball to Morris before the fifth goal. In his cameo appearance, Reggie Cannon sent the ball in from the wing on the final goal.

TRIVIA. Since Trinidad & Tobago beat the USA in World Cup qualifying in October 2017, the Soca Warriors have played 14 games and have won twice, over the United Arab Emirates (2-0) and Guadeloupe (1-0). The results included a 1-1 tie with Guyana, which the USA beat, 4-0, in its Gold Cup opener last Tuesday. 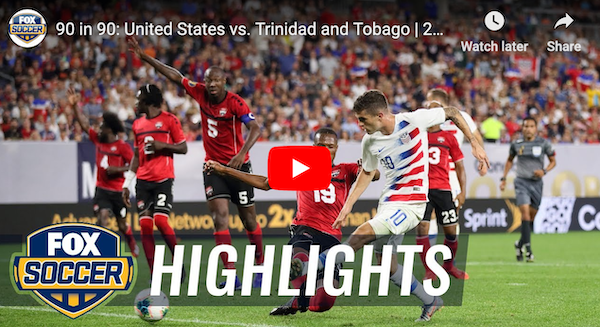