The USA prevailed, 2-1, over Spain in what was by far its most challenging game at the World Cup so far. The Spaniards' ability to test the USA's defense and their quick response to the USA's go-ahead goal created a dramatic match and the specter of a major upset. But eventually Spain paid for its recklessness and the USA was rewarded for its resilience. Spain, which committed 17 fouls compared to the USA's five, conceded both its goals on penalty kicks, could have easily been called for another, and was lucky lenient referee Katalin Kulscar didn't yellow-card a Spaniard until the 85th minute. 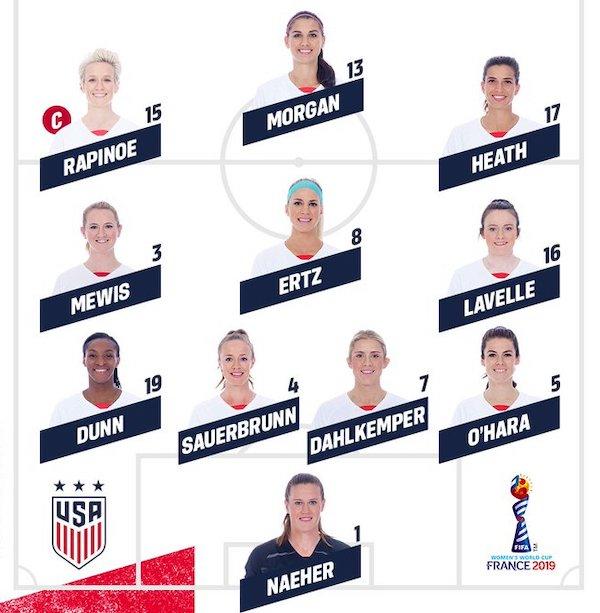 Two minutes after the USA took a seventh minute lead, Alyssa Naeher, with lots of time and little pressure, served a short pass to Becky Sauerbrunn that was easy for Jennifer Hermoso to steal. The Spanish striker finished into the top corner. Naeher came out of her penalty kick in the 20th minute to head away a through ball, and she caught or punched away Spain's best crosses.

The USA discovered how much its usual mode of attack could be disrupted by an offensive-minded team. Outside backs Crystal Dunn, who had to battle against right wing Lucia Garcia, and Kelley O'Hara, often occupied by Alexia Putellas, were forced to play much more conservatively. This resulted in far fewer balls on the right wing to Tobin Heath, who depends much O'Hara's support. Dunn did manage to streak forward a couple times in the second half, setting up a Rose Lavelle shot and delivering the ball to Lavelle via Alex Morgan that led to the second penalty kick call. Central defender Abby Dahlkemper, throughout the game and twice in stoppage time, cleared Spain's balls into the middle. Dahlkemper's passing sparked numerous U.S. attacks, including the one the led to the first penalty kick. Becky Sauerbrunn, who shared blame on the first goal, was also unbeatable in the air and blocked Lucia Garcia's 54th-minute shot.

Julie Ertz commanded the midfield, helping limit Spain to wide attacks and serving a variety of passes -- to both wings and to the frontline -- during U.S. buildups. Sam Mewis helped Dunn defend on the flank favored by the Spaniards and also fed Megan Rapinoe. Mewis' two shots missed the target. When Rose Lavelle went solo downfield, it unsettled the Spaniards and one would have liked to see more it. Lavelle was fouled for the second penalty.

Mapi León's awkward challenge on Tobin Heath resulted in the first penalty kick. Heath, getting little service, managed only one shot, a miss from where one would have expected a cross. Many more attacks came from Megan Rapinoe on the left wing, where Rapinoe faced a feisty Marta Corredera all day long, and managed to break through for four shots. The Spaniards took turns fouling Alex Morgan, resulting in five free kicks in the midfield. Morgan didn't manage a shot on goal, arriving a tad late on two crosses. When she finally got to ball in the penalty area, the pass from Dunn deflected off her foot, but arrived at Lavelle's feet before the PK foul.

Coach Jill Ellis waited until the 85th minute to make the first of three subsitutions.

TRIVIA.
The USA and Spain have met just once before, a 1-0 USA friendly win in Alicante last January. 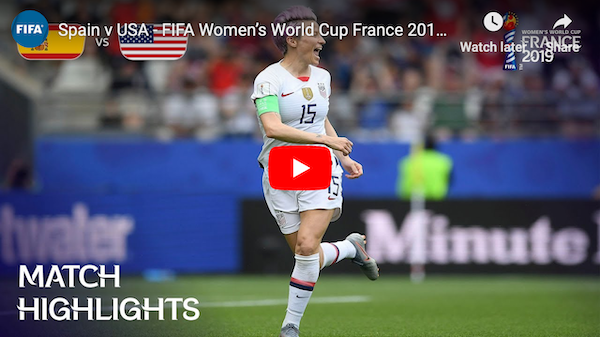