The VAR/goalkeeper mess -- an IFAB production

The International Football Association Board -- the IFAB -- has presented us with an extraordinary document. A proclamation telling us that one of soccer’s rules -- that is to say, one of IFAB’s sacred "laws" -- is flawed.

So flawed, in fact, that IFAB has granted a “Temporary Dispensation” to the current Women’s World Cup allowing them to ignore it.

A first, I think -- at least I cannot recall anything like this happening before. The faulty rule concerns “kicks from the penalty mark” (KFPM), the shootout tiebreaker. The current Rule 10 demands that “if the goalkeeper commits an offense and, as a result, the kick is retaken, the goalkeeper must be cautioned.”

The offense in question is goalkeeper movement -- forward movement off the goal line before the kick is taken. This has been an irritating problem for referees for years now. It can be said, as the truth of the matter, that virtually all goalkeepers have been consistently moving -- cheating -- and they have been getting away with it.

How so? For two reasons. One of them a very good reason: the realization that human eyes and reflexes are not sharp enough to distinguish whether the movement is made exactly as the kick is taken, or slightly before or after. And another very bad reason: the widespread referee bias in favor of defensive play, in particular the leniency shown toward goalkeepers.

The fact that goalkeepers were cheating was, of course, widely known. So too was the fact that one of soccer’s most important trophies had twice been won by a team using flagrant goalkeeper cheating in shootouts. That was the Spanish club Sevilla, winning the UEFA Cup (now the Europa League) in 2007 and 2014. 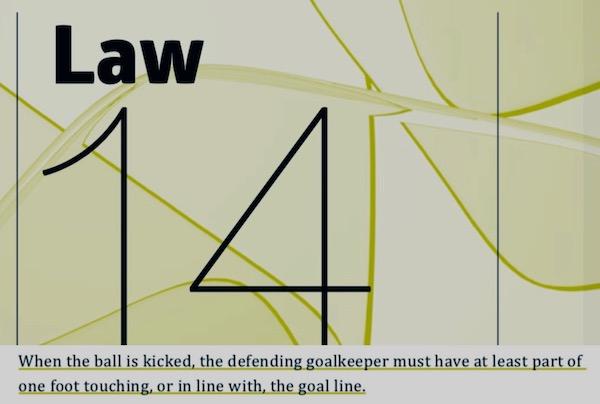 Eventually, the news that goalkeeper movement was a problem seeped through to the traditionally slow-moving IFAB. IFAB’s belated reaction came just a few months back, when the rules revisions for the 2019-2020 season were announced. They are posted on the IFAB website. Where Rule 14 used to stipulate that “the goalkeeper must remain on the goal line . . . until the ball has been kicked”, the new goalkeeper-friendly wording reads:

“When the ball is kicked, the defending goalkeeper must have at least part of one foot touching, or in line with, the goal line.”

And so we arrive at the villain of all this rule changing: VAR. It is so utterly typical of IFAB’s ineptitude that it should, at last, attempt to resolve the goalkeeper movement problem at the very moment when VAR -- which can infallibly detect goalkeeper movement -- is coming into use.

Yet IFAB -- forgetting for the moment that it has just relaxed its own rule in order to allow for human weakness -- now comes up with its Temporary Dispensation ... which, it turns out, is based entirely on the fact that VAR is so overwhelmingly efficient that it can replace IFAB rules.

The rule VAR is shoving aside is the one demanding a yellow card for goalkeeper movement during a KFPM sequence: “If the goalkeeper commits an offense and, as a result, the kick is retaken, the goalkeeper must be cautioned.”

IFAB, openly and unapologetically taking pity on the keepers, alleges that those yellow cards -- which, it explains (as though we didn’t know) are intended “to act as a deterrent to the goalkeeper to not infringe the Laws of the Game” are now unnecessary. Why? Because. “the presence of the VARs acts as an even greater deterrent to goalkeepers as they know that any encroachment will be detected by the VARs if it is not detected by the on-field match officials."

The IFAB reasoning here seems to be that goalkeepers are simply incorrigible and will go on cheating regardless of yellow cards. Given that the rules demand a yellow card for offenses during the shootout, the awful possibility arises of keepers being ejected. Something that referees always dodge if they can.

So the rules come to the rescue. A recent change to the DOGSO rule says that when a penalty kick is given, defenders (particularly goalkeepers, whom the rule changers no doubt had in mind) whose foul was “an attempt to play the ball,” should not be red-carded. A judgment call open to abuse -- witness a recent Copa America game in which the Chile keeper was allowed to stay on the field after his dive at the feet of an Ecuadoran -- so late that it never got within a yard or more of the ball -- was judged, by VAR, to be an attempt to play the ball.

And now comes further goalkeeper favoritism with IFAB’s “Temporary Dispensation” that suspends (just temporarily you understand) a rule that mandates yellow cards for keepers who encroach during shootouts. This too is designed to avoid goalkeepers getting ejected.

Lest we lose sight of what is at stake here: goalkeepers are being accused of cheating at an absolutely vital, win-or-lose moment of a game. Do they deserve any leniency?

They do not, but they continue to get it. The new 2019-2020 rule book now allows them to take one step forward. And IFAB is still not sure they can be trusted to obey the rules. Which could mean trouble now that VAR sees everything.

So IFAB changes its rules, masking its climb-down with a grandiose claim: “Both FIFA and The IFAB therefore believe that the requirement to caution an offending goalkeeper in KFPM in matches with VARs is not necessary and risks unfairly distorting the KFPM if a goalkeeper is sent off.”

Which is sheer claptrap. If goalkeeper-ejection is a problem, it is not caused by the rules, nor by VAR. It comes from the goalkeepers themselves. All they need to do to stay in the game is to obey the rules. It really is that simple.