From Mexico to Curacao: How the Gold Cup quarterfinalists stack up

Once the USA finishes group play against Panama -- both teams have already clinched quarterfinal spots -- on Wednesday evening, it needs three more wins to lift the Gold Cup. Here's a look a the other six quarterfinalists, some of which the USA will meet in the knockout stage of this Gold Cup.

HAITI: Djimy Alexis' unique heroics. The 21-year-old right back Djimy Alexis went from zero to hero on Monday night, vaulting Haiti to winning its first Gold Cup group in team history. Alexis, who plays professionally in Haiti for AS Capoise, was a one-man show in front of the largely Caribbean diaspora crowd of Harrison, New Jersey: 1. Own goal in the 13th minute. 2. Gamewinning goal in the 81st minute. 3. Stretchered off in the 84th minute, only to sprint back onto the field in the 88th minute to finish the match: a 2-1 win over Costa Rica.

Other players to look out for include New York Red Bulls Derrick Etienne Jr., and St. Mirren’s Duckens Nazon, who has scored 16 goals in 27 games for his country.

Haiti, a country of 11 million and 10,714 sq. miles faces off against Canada, a country of 37 million and 3.9 million sq. miles. But Haiti isn’t the biggest small surprise in the remaining Gold Cup octet, though. That would be Curacao (see below).

CANADA. Can Davies Repeat 2017 Heroics? Besides getting thoroughly outplayed by Mexico in their second match, the Canadians have impressed in the group stage, beating Martinique and Cuba 4-0 and 7-0, respectively.

The more famous youngster, 18-year-old Alphonso Davies, is currently the youngest goalscorer ever in the tournament after scoring thrice at the 2017 Gold Cup: when Canada beat French Guiana, 4-2, and tied Costa Rica, 1-1. He was the tournament’s top scorer and the Young Player of the Tournament -- part of the reason Bayern Munich cashed out $22 million for the then-16-year-old.

But Davies hasn’t scored for Canada since the 2017 Gold Cup. Against Mexico, his best chance came in the 52nd minute when he twisted away from both Mexican center backs with a burst of speed but lasered his shot wide.

Daniel Cavallini, the striker who scored a hat trick against Cuba on Sunday night, debuted for Canada before in a 8-1 World Cup qualifying loss to Honduras in 2012, the team’s second worst loss ever. He turned down national team callups until a 2015 friendly against Ghana, but has entered from the wings to the spotlight after scoring 11 goals in 32 appearances for Puebla in Liga MX.

COSTA RICA: The Legacy of Brazil 2014. Los Ticos were the third-most favored to win the tournament, but failed to avoid powerhouse Mexico after losing to Haiti. They have a chance against El Tri, though, thanks to the likes of captain Bryan Ruiz and Joel Campbell running the attack and LA Galaxy’s Giancarlo Gonzalez anchoring the backline. Ruiz, the ex-Fulham man, is tall and lanky and oozes quality on the ball, while Campbell can run down the flanks with terrifying speed.

Joining Ruiz in the midfield is Celso Borges. It's the midfield duo that led Costa Rica out of the 2014 World Cup group of death consisting of former World Cup winners England, Italy, and Uruguay and into the quarterfinals for the nation’s best finish ever.

Other holdovers from the 2014 team include Costa Rica and Real Salt Lake legend Alvaro Saborio. The CF Monterrey youth academy product was the MLS team’s first Designated Player in 2010 and is the team’s all-time leading goal scorer with 63 goals in 127 games. The 37-year-old scored a 13th minute goal against Haiti at this Gold Cup. The Ticos have a chance if Campbell and Ruiz can take advantage of Mexico’s high backline.

MEXICO. Martino’s XI coming into form. Mexico finished group play with a less-than-convincing display against Martinique, escaping Charlotte, North Carolina with a 3-2 win. El Tri is still the team to beat in the Gold Cup: It's won all three group games for the first time since 2011 and anything but a title would be considered an unacceptable performance.

Mexico’s last game may have been their worst performance with Coach Tata Martino in charge -- Martinique fielded only five professional players, after all -- but it’s hard to fault players for complacency. Mexico would’ve needed to lose by six goals to finish third in their group and not progress to the knockout round.

Martino’s high pressing system is rounding into form. Fullbacks Jesus Gallardo and Luis “Chaka” Rodriguez have proved their work ethic and quality in Mexico’s first three games, helping the front five peg opponents back into their half.

The Los Angeles Galaxy's 21-year-old Uriel Antuna leads El Tri with four goals at this Gold Cup. The 32-year-old captain Andres Guardado is still one of the most consistent performers in the midfield, and defensive midfielder Edson Alvarez is continuing to improve with every performance. He’s the defensive cloth that must plug a Mexican defense that’s been more porous than desired for the El Tri faithful.

Mexico is far from invincible. It has conceded nine goals in seven games. Martino’s system depends on a defensive gamble: that opposing teams can’t beat their press or their high line. But if teams with pacy forwards and marksmen in the midfield can thread their offside trap, they’ll get chances to score. Especially if players lose the ball in the back, like center back Nestor Araujo did against Canada. With center back favorite Hector Moreno match fit, the center back is one of the few positions Martino is scratching his head about.

JAMAICA: Expecting more from Leon Bailey. The Reggae Boyz were the dark horse favorites entering the tournament, and they’ve done just enough to win their group. But their performances have been far from convincing. Rising star Leon Bailey of Bayer Leverkusen has been lackluster since making his national debut in the opener against Honduras. The 21-year-old midfielder-turned winger is often double-teamed when he gets the ball, which has gifted opportunities to other players, like breakout star Devon Orgill who scored two goals in its 3-2 win over Honduras.

Jamaica may be tough to break down -- center back Damion Lowe is especially dominant in the air -- but it failed to create meaningful chances and even keep possession in a 1-1 tie with Curacao on Tuesday night. It managed only scoreless tie against El Salvador. 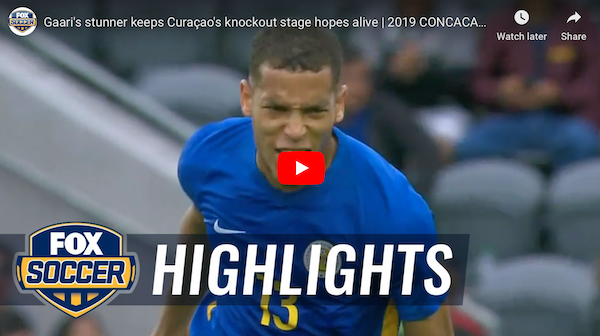 CURACAO. The Dutch Connection. Curacao had never won a game — let alone advanced to the knockout stage — in Gold Cup history. The former Dutch colony that competed under the name Netherlands Antilles until 2010 did both in this year’s edition.

They scored their first Gold Cup goal ever thanks to Leandro Bacuna to beat Honduras 1-0 on match day two; on Tuesday night, they tied Jamaica with a last-gasp superstrike from Jurien Gaari, good enough to finish second in Group C if Honduras could beat El Salvador by more than one goal.

To say the 171 sq. mile island — with a population of 160,000 people — is punching above its weight would be an understatement. Its performance is helped much by the Curacao-Netherlands pipeline.

Of its 11 starters against Jamaica, seven were born in the Netherlands, 10 started their pro careers in the Netherlands and seven play for Eredivisie teams. Rotterdam-born defender Cuco Martina plays for Feyernoord, on loan from Everton. The outlier: Dutch-born midfielder Michael Maria, who plays for the Charlotte Independence in the USL championship, started his career in Germany.