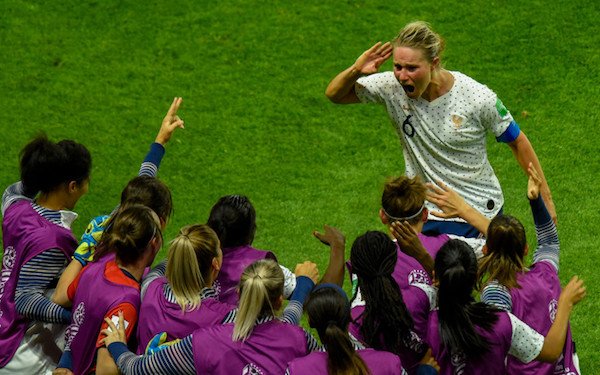 The defending champion United States is the favorite in its much-anticipated quarterfinal match against host France Friday night at the Parc des Princes in Paris.

The teams have met twice in official play. The USA won, 3-1, in overtime in the semifinals at the 2011 Women's World Cup and 4-2 after trailing 2-0 early in their opening game at the 2012 Olympics.

Les Bleues have not played well, as the French press has been quick to point out, but those who write them off will do so at their peril.

Here are five reasons why France can beat the USA ...

The January result should be taken with a grain of salt, though. The French were in the middle of their league seasons while the USA was playing its first game and wasn't at full strength, playing the untested Emily Fox, a University of North Carolina sophomore, at outside back.

To be sure, OL has other great players -- Lucy Bronze, who plays for England, Germany's Dzsenifer Marozsan and Norwegian Ada Hegerberg, the Ballon d'Or winner who skipped the World Cup -- but its president, Jean-Michael Aulas, believes France can beat the odds and defeat the USA.

"The draw was difficult for France," he says, "but I'm the opposite of the prevailing view. I have absolute confidence in the French team because there are seven Lyonnaises and they are used to winning and they will lead the team until the end."

3. Wing play. Coach Corinne Diacre has used four wingers with varying success -- Kadidiatou Diani, Viviane Asseyi and Cascarino on the right; Le Sommer on the left -- but they give the French weapons that the USA has yet to face at the World Cup.

Diani, who set up France's first goal against Brazil, could have a field day with Crystal Dunn while Le Sommer (193 goals in 199 games for Lyon) is the favorite target of long balls out of the back.

Where their influence could be decisive is to pin down right back Kelley O'Hara and Dunn and starve the two U.S. wingers, Tobin Heath and Megan Rapinoe, of service.

4. Set-pieces. Led by Julie Ertz, the USA dominates the air waves, but again it has never faced a team as good as France on set pieces. It was a curling free kick from Majri into the area that Henry picked out to hit into the goal for France's winning goal against Brazil.

In the opening win over South Korea the giant Renard -- at 6-foot-1, the tallest player at the World Cup -- scored twice on headers, while Valerie Gauvin is absolutely fearless in the penalty area as she showed when she went up with Brazilian keeper Barbara for the ball and scored a goal that was disallowed on Video Review.

5. Griedge Mbock. In the middle of the French backline, Renard gets all the headlines, but Mbock, who was born to Cameroonian parents and hails from Brittany, the hotbed of French women's soccer, has been the best defender at the World Cup. (You can get an argument for her OL teammates Bronze and Majri.)

Mbock made the defensive play of the World Cup, racing back and sliding in to clear Brazilian Debinha's potential game-winner on the breakaway in Sunday's round-of-16 game.