The United States is through to the knockout stages of the 2019 Gold Cup and while this was predictable and expected, the past three games have served as a learning experience for both the remainder of the tournament as well as moving forward into the cycle.

As with any set of games, there are positives and negatives to take away -- even when much tougher opponents await. This series has been no exception and this is what I think the past three games revealed.

The 1-0 win over Panama on Wednesday night gave the team a perfect record with nine points but most importantly, the U.S. team did not concede a goal in its three games. The opposition hasn’t been great but the fact that the team has generally been in such control is a positive. Opponents have had occasional chances on counterattacks but nothing that could be considered a golden opportunity.

The U.S. team had a big edge in possession and created chances. Of course it needs to do a better job of creating more chances and finishing the ones it does create, but if Jozy Altidore finishes the point-blank chance he had in the first half (which he does most of the time), this games opens up much earlier and Panama would come out of its shell.

Panama’s only real chance to score was trying to create space on a counterattack and beat Omar Gonzalez in a footrace. Aside from that, Panama didn’t have any real chances.

Concacaf soccer is never going to be pretty. It’s ugly stuff but this was far more improved than the 2015 Gold Cup when the U.S. team brought its best players but was embarrassed en route to a fourth place finish -- despite not playing Mexico. The 2015 Gold Cup was when the wheels started to come off for Jurgen Klinsmann and it wasn’t just a matter of the team getting upset -- which can happen to any team.

The 2015 U.S. team was outplayed in the group stages where it was outshot by Haiti, Honduras, and Panama by a combined 50-20 margin. Then after losing to Jamaica in the semifinal, it was outshot 25-5 in a loss to Panama in the third-place game.

There is a lot for the team to work on but it hasn’t been playing down to the level of its competition, so far. 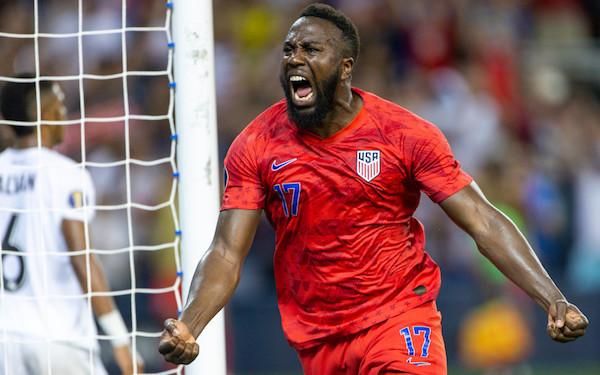 Midfield depth is a problem

The first-team midfield triangle of Christian Pulisic-Weston McKennie-Michael Bradley is generally pretty good. The problem is what happens after those players are removed. The second group of Will Trapp–Cristian Roldan–Djordje Mihailovic were not nearly as dynamic or dangerous against Panama.

Obviously, there is going to be a gap in talent and Pulisic and McKennie have Champions League experience. But having backups who can get the job done is critical for any team that wants to advance in major tournaments. Wil Trapp and Cristian Roldan have continued to struggle with the U.S. team

Djordje Mihailovic is the best of the bunch but is still inconsistent. He is still very young at 20 and might need time to mature and grow into this level. But Mihailovic does show glimpses of impressive talent.

The good news for the U.S. team is that there should be plenty of competition among these midfield positions that should build-up the depth. Reggie Cannon and Nick Lima have been solid enough at right back to the point where maybe Tyler Adams is moved back to his natural defensive midfield positions.

The attacking midfield options will also have depth moving forward too. Paxton Pomykal and Jackson Yueill look ready for appearances -- although both could play with the U-23 team through next year. Duane Holmes is on the radar and looks to be a good fit when healthy. Similarly, Sebastian Lletget is also back from his injury for the Galaxy. Beyond that contingent, there are promising young players like Richard Ledezma, Brendan Aaronson, and Alex Mendez who could be on the verge of a breakthrough.

What this Gold Cup has taught us so far is that the key pieces of the puzzle look set but the field is wide open for the depth positions in midfield.

I think last night it became clear that Paul Arriola and Tyler Boyd are the top wings on the Gold Cup roster and perhaps on the team overall -- especially if Christian Pulisic plays as a No. 10 as opposed to on the wing.

Last night Jordan Morris and Jonathan Lewis earned the start on the wings and neither made a case that they were better than Arriola or Boyd. Lewis was active getting into dangerous areas but his final ball was lacking in a lot of areas. Morris was a little more polished but still behind the others.

The big question comes up top between who is the top option at forward. Jozy Altidore is still getting into form with the U.S. team and has dealt with injuries yet again this season. He missed some clear chances against Panama but he scored a nice goal. Zardes has scored three goals so far but it seems likely that Altidore will probably get the nod in the big games at the end of the tournament.

Moving forward, other players like Josh Sargent could push Altidore and Zardes but it will come down to playing time at Werder Bremen.

It’s tough to judge the backline because the U.S. has not really been tested significantly. Matt Miazga played well against Panama but Aaron Long and Walker Zimmerman have not dropped the ball either. Omar Gonzalez’s speed showed itself to be a major liability against Panama as Panama’s attack was geared toward finding a way into getting into a footrace with Gonazalez.

Moving forward into the later stages of this tournament and into the fall, the competition will be tough in central defense. John Brooks, when healthy, will be back in the fold. Then there is the contingent of players eligible for the U-23 team which could also be good: Erik Palmer-Brown, Cameron Carter-Vickers, Miles Robinson, etc.

Right back has been a pleasant surprise at the Gold Cup that could pay useful dividends. Both Nick Lima and Reggie Cannon have played well. Cannon’s crossing was lacking against Panama but he was good in all other areas of the game. What is helpful about that is that in combination with DeAndre Yedlin, when healthy, there is a steady flow of competent right backs that eliminates the need for Tyler Adams to play that position

Left back, however, continues to be a major problem with little relief in sight. Tim Ream has been a competent defender but doesn’t offer much getting forward and is best a central defender. Daniel Lovitz is also mostly invisible. There are a few potential options like Antonee Robinson, but not many American left backs are suitable options at the moment for the full national team.

The pre-Gold Cup friendlies were terrible but the team is slowly finding its footing right now. The competition hasn’t been great but its about making more of its possession. It is not making many bad mistakes or gifting possession to the opponents.

The biggest weakness on the team is allowing too much space in the midfield. Michael Bradley will have to improve in this area if the U.S. team wants to win the Gold Cup. That was a big reason why the team folded to Jamaica and Venezuela before the tournament. The team is far from fixed and things aren’t great, but hopefully these last few games are evidence the players are buying into the system and the team. The tougher games that await will tell a broader picture as to where the team stands heading into the fall and into 2020.