The USA has reached the Women's World Cup semifinals for the eighth straight time since the tournament's inception in 1991 thanks to a 2-1 quarterfinal win over host France. As it has in all of its games at this World Cup, the USA scored early. That proved particularly valuable against the French, who controlled much of the midfield play but didn't find the net until the 81st minute after the USA had scored its second. While the Americans capitalized on minimum attacks, the French faltered against the USA's firm backline. The USA faces England in the semifinals on Tuesday. 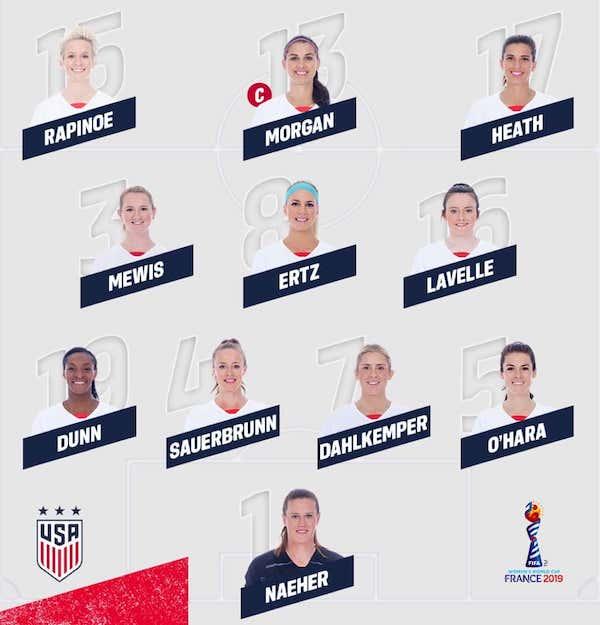 The two crosses through the goal area that Alyssa Naeher misjudged turned out innocuous. Naeher tipped Eugenie Le Sommer's lobbed shot over the crossbar in the 78th minute and one minute later made a diving save on Amadine Henry's shot from the edge of the penalty area.

Right back Kelley O'Hara prevented Le Sommer and Amel Majri from delivering effective passes from the left wing. Crystal Dunn had the toughest assignment, battling Kadidiatou Diani. Although Diani slipped through a few times, Dunn held her up long enough for the U.S. central backs to be well positioned to prevent Diani's efforts from creating clear chances. Dunn also set up Tobin Heath for a goal called back for an offsiide that probably should have stood. Central defenders Abby Dahlkemper and Becky Sauerbrunn ensured that France's 60-40 edge in possession didn't translate into chances inside the penalty area. Dahlkemper and Sauerbrunn committed zero fouls while defending superbly. Sauerbrunn won several headers and tackles, including a slide-tackle near the wing on Delphine Cascarino that put the brakes on a French counterattack in the 76th minute. The backline also moved shrewdly enough to catch the French offside six times, faltering only the free kick that Wendie Renard scored on.

Julie Ertz, after a pass from Megan Rapinoe, took the USA's first shot in the 1st minute. A strike from 22 yards solidly hit but straight to the keeper. Ertz did well defensively to force the French wide and often moved back to assist the backline. She won balls in the U.S. penalty area and in the midfield. Samantha Mewis managed three shots on goal -- including one that required a diving save from goalkeeper Sarah Bouhaddi in the 1st minute of the second half and a rebound opportunity for Heath that Sarah Bouhaddi kick-saved -- despite spending much of her time defending. Lavelle, who set up a Mewis shot late in the first half, ended some promising forays with poor passes.

Alex Morgan stormed down the wing and was fouled by Griedge Mbock Bathy for the free kick that Megan Rapinoe smashed low through a crowd into the net for the 5th minute go-ahead goal. Morgan, who shot weakly to goalkeeper Bouhaddi in the 14th minute, later in the first half gave up possession three times with a bad passes and twice with fouls. But Morgan made up for the flaws by helping set up the second goal with a pass to Tobin Heath.  While Rapinoe was a consistent threat on the left wing, Heath rarely got the ball on the right wing. When she finally did, from Morgan's pass, she sent in the pass in for Rapinoe's second finish. Heath committed the foul on the free kick that set up France's goal. Rapinoe scored her second goal after a perfectly timed run into the middle and with a crisp strike past Marion Torrent and Bouhaddi.

Bringing in Lindsey Horan for the last half hour was a wise move by Coach Jill Ellis. Although she couldn't stop 6-foot-1 Wendie Renard on her headed goal, Horan disrupted the French midfield as Ertz retreated to defend with the center backs. Carli Lloyd intercepted a French pass in the midfield and helped keep the French backed up when they searched for the late equalizer.

TRIVIA.
The USA never lost a World Cup game in which it scored first. 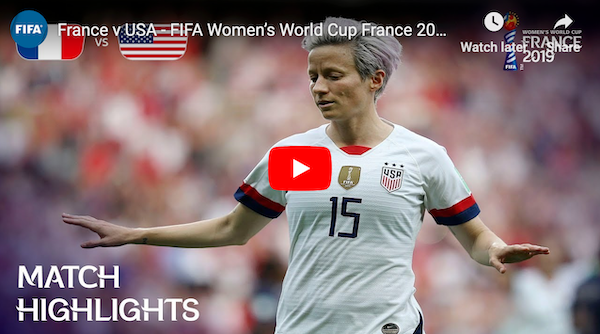