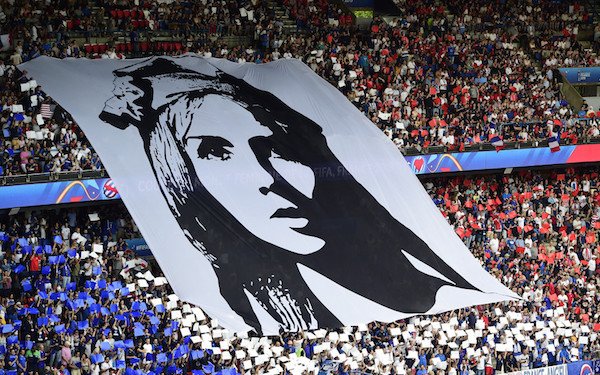 The USA has two more games to play in Lyon if it wants to defend its Women's World Cup title, and England and whoever emerges from the other side of the bracket if it gets past England will probably be better teams than the fragile and flawed French team it beat, 2-1, Friday night.

But never before in its glorious history has the USA had to play the host team at the World Cup. And never has it played in an atmosphere like what was witnessed at the Parc des Princes, on the edge of Paris.

Except after the two U.S. goals and as the USA ran out the clock in the five minutes of stoppage time, the chants of "USA! USA!" from the 10,000 American fans who filled the Tribune Boulogne were drowned out by the 30,000 fans urging on France with chants of "Allez Les Bleues" even after its predictably nervous start to the quarterfinal billed by Hope Solo as the match of the century.

On a day when the week-long heat wave peaked with a French record of almost 116 degrees registered in the town of Gallargues-le-Montueux, located in in the Gard between Montpellier and Nimes, France-USA turned the Parc des Princes into a cauldron like has never been seen before at a women's soccer match. L'Equipe, the French sports daily, took it one step further and said the atmosphere was the most incredible seen at the Parc des Princes, home of Paris St. Germain, in 20 years.

Megan Rapinoe did her best to silence the crowd with goals in the 5th and 65th minutes, but the French supporters continued to urge on the Les Bleues despite their inability to string together more than a few passes in another disappointing first half. It said a lot about the intensity of the occasion that U.S. coach Jill Ellis quickly went with five in the back and surprised the French -- "jamais vu," said French coach Corinne Diacre -- even though Ellis had tested it out earlier in the year.

"That was the most intense match I have ever been a part of," said the U.S. coach. "A win's a win in a World Cup. I haven't seen many pretty games in a World Cup. We trained for a back five for moments like this. France are an incredible team. The surge from the fans was intense. At times, it felt like a bit of a tsunami."

You can't say Rapinoe stole the show -- it's been the Pinoe show for five days now, since she won the Spain game with two goals on penalty kicks -- but she will inevitably get all the headlines and honors -- already France Football has tipped her as the pretender for the 2019 Ballon d'Or -- which is disappointing.

The USA needed great games from a host of players, including Julie Ertz, who was pushed into the middle of the backline, Crystal Dunn, who shut down Kadidiatou Diani, and Alex Morgan, who took a beating from the Spanish defense but went the distance against France and was involved in both goals.

If the truth be told, the 2019 World Cup came four years too late for the French, who had better teams in 2011 when they lost to the USA, 3-1, in overtime in the semifinals, and 2015 when they fell to Germany in a shootout in the quarterfinals. To their credit, though, they showed unusual resolve and played the game of their lives in the last 30 minutes.

Wendie Renard, France's 6-foot-1 defender, towered over the mass of U.S. defenders to powerfully head Gaetane Thiney's free kick into the goal in the 81st minute and get the French back in the game. But the second goal never came, despite appeals by the French for a penalty when Amel Majri's cross hit Kelley O'Hara's arm, similar to the handball call the Netherlands got at the end of its match against Japan on Tuesday.

L'Equipe termed Ukrainian Kateryna Monzul's refereeing "scandaleux," but she got backing from Dutchman Danny Makkelie in the VAR booth. The irony, of course, was that it was the same Makkelie who had called the penalty kick for a handball in France's 4-2 win over Croatia in the 2018 World Cup final and ordered the retaking of Renard's penalty kick that decided the France-Nigeria game in the group stage.

Diacre termed the defeat a sporting setback but told her players they had won the hearts of young girls across France.

A lot of those girls probably cried on Friday, and as hard as the loss will be to take -- Saturday's headline in L'Equipe was "La gueule de bois" ("Hangover") -- the hosts of the 2019 Women's World Cup have done their job.

A generation of little girls will aspire to be like captain Amandine Henry, Renard and Majri like the 1999 Women's World Cup inspired a generation of young players in the United States, now headed down to Lyon in a bid for a fourth world championship.