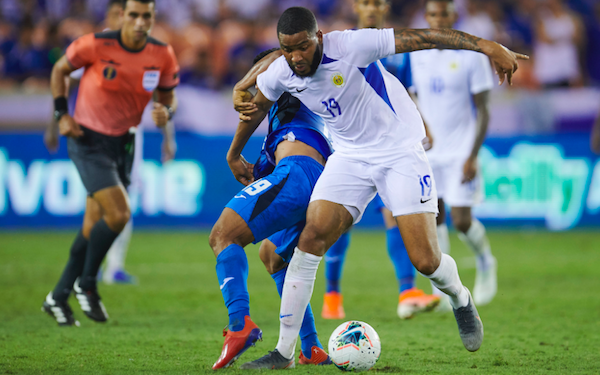 The USA, which has never lost to a Concacaf opponent in the Gold Cup quarterfinals, will be heavily favored when it plays Curacao in the second game of a doubleheader on Sunday in Philadelphia.

Curacao has been the surprise of the Gold Cup, advancing to the quarterfinals ahead of El Salvador and Honduras, but don't tell that to U.S. coach Gregg Berhalter.

Berhalter spent the first six of his pro career in the Netherlands, where many players from Curacao play. Curacao used to play as the Netherlands Antilles, but that changed in 2011 when it became its own country.

“First off," said Berhalter, "with [U.S. men's national team general manager] Earnie [Stewart] being from Holland, and having played in Holland before, I know that there’s a very close connection between the Dutch and Curacao, and a lot of these Curacao players have played there before. This is a team that we can’t take lightly. I know that for sure.”

Curacao made its first appearance in the Gold Cup in 2017, losing to Jamaica, El Salvador and Mexico, all by 2-0 scores. This time it traded Mexico for Honduras and earned a split of its three games.

It lost to El Salvador, 1-0, but came back to beat Honduras, 1-0, on a goal by Leandro Bacuna. It went into the final day of group play at sold-out Banc of California Stadium in Los Angeles, though, needing to get a result against Jamaica and have El Salvador lose to Honduras.

Jurien Gaari rescued Curacao, scoring in the third minute of stoppage time to give it a 1-1 tie with Jamaica, and he and his teammates then watched Honduras, which had lost its first two games, pound El Salvador, 4-0, with four second-half goals, and celebrated their stunning qualification, jumping up and down, many with bags of popcorn in hand.


Like a majority of the Curacao players, Bacuna (Cardiff City) and Gaari (RKC) are Dutch-born and play in Europe. Just three players play for clubs in Curacao.

“I don’t think they could be a dangerous team, they are a dangerous team,” Berhalter said “It’s a good team, a lot of flexible movements offensively, they get into high positions with their fullbacks. The wingers are tucking inside, overloading the middle of the field and they have good players.”

Berhalter is expected to revert to the team that started the first two games of the Gold Cup and beat Guyana (4-0) and Trinidad & Tobago (6-0). Jozy Altidore got his first start of the tournament in the 1-0 win over Panama, but he is not expected to start ahead of Gyasi Zardes, who scored three goals in the first two games and could have had several more.

"There's always competition for spots," Berhalter said. "You want guys to be performing well. I know Jozy is an outstanding player. We know he can help this team, and I know he has a lot to give. But I don't think any player is guaranteed to start."