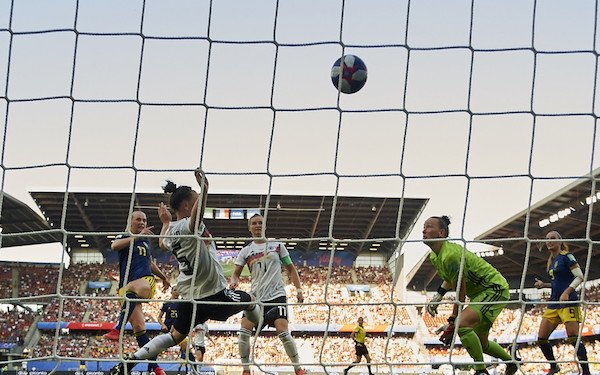 Sweden ended almost a quarter century of German domination in major tournament play when it came back from a goal down to beat Germany, 2-1, in the Women's World Cup quarterfinals in Rennes on Saturday evening.

The result not only sends the Swedes to Lyon for the semifinals against the Netherlands, but it clinched the third and final European berth in the Olympics.

Germany had beaten the Swedes in the 2003 Women's World Cup final and more recently in the 2016 Olympic gold-medal game in Rio de Janeiro. It came into the quarterfinals with a run of four straight shutout wins but couldn't hold on to an early lead, falling on goals by Sofia Jakobsson and Stina Blackstenius.

Sweden had dropped a 2-0 decision to the USA in its final group game that moved it on the other side of the bracket, away from host France and England. In that game, Sweden coach Peter Gerhardsson started mostly a reserve team.

“We looked at Germany," Gerhardsson, "and knew there would be a bit more space behind their backline to exploit with Blackstenius and Jakobsson. It worked well, sprinting past the defensive line."

After the break, the Germans brought on star Dzsenifer Marozsan, who had scored in the 2016 gold-medal game but had missed the last three World Cup games with a broken toe suffered in the opener against China. But she struggled to make an impact as the Germans had to chase the game after Blackstenius put the Swedes ahead in the 48th minute.

Sweden will join the Netherlands and Great Britain (England) as the three Olympic representatives from UEFA. It does hold an Olympic qualifying tournament because it has a full qualifying competition to determine the 16 teams that play in Euro 2021.