The pros and cons of a 24-team Women's World Cup 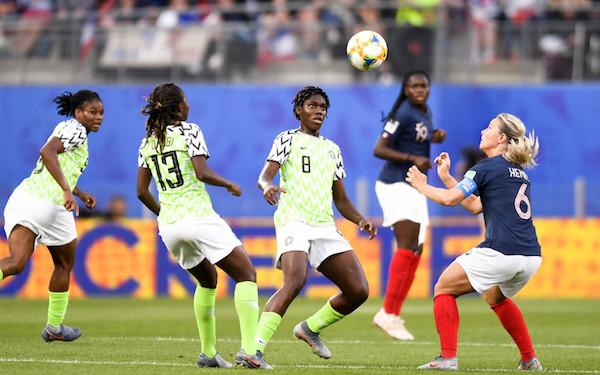 There have been five international tournaments taking place simultaneously over the past few weeks: the Women's World Cup, Africa Cup of Nations, Copa America, Gold Cup and the European U-21 Men's Cup. Four of the tournaments have had the mathematically awkward number of either 12 or 24 teams taking part. Only the Gold Cup has moved to the logical number of 16 teams that allows an easy transition from the group phase to the knockout rounds.

First, let's discuss the obvious disadvantages of a 24-team tournament. That is, you spend two weeks and 36 games in the group phase narrowing down the field by just one third. In the case of the Women's World Cup, 16 is arguably the number of teams you should have started with. There is simply not yet the quality to justify such a bloated tournament, leading to too many one-sided games. But there is a strong counter-argument to this point, which I'll come to later.

For the women, the 24-team championship not only created many imbalanced group games, but also weakened the knockout phase too. This in fact applies to any 24-team tournament. It means that a team losing two of its three group games can still qualify for the knockout rounds, as Cameroon and Nigeria did. Had results gone its way, Argentina might have progressed with just two points from two ties.

The African Cup of Nations, like the European Championship, has now extended from the perfect 16 to a 24-team tournament. For a continental competition, this makes little sense. Africa has 51 countries taking part and Europe 55, meaning that almost 50% of teams that enter qualifying will make it to the finals. This not only weakens the quality of soccer at the tournament, it devalues even making it there at all, unless you're a rank outsider. To change the format of four groups of four, followed by eight teams in the quarterfinals, feels like meddling with a perfect omelet made with free-range eggs and fresh herbs by a French chef. What's already perfect doesn't need extra salt and pepper, let alone ketchup and strawberry jam.

All this applies on a smaller scale with 12-team tournaments. The Copa America's group phase has long been an extended waiting game to see four teams eliminated -- usually the two guest teams, plus Venezuela and one other. The 12-team European U-21 tournament, on the other hand, just sees four teams from three groups of four making it straight into the semifinals - the group winners and the best second-placed team. Judging by the stunning quality on display in last night's final between Spain and Germany, which the Spaniards edged 2-1, this format really does allow the best teams to compete for the trophy. This competition, though, will upgrade to 16 teams for its next edition in 2021. (Or downgrade, depending on your point of view.)

The Gold Cup, on the other hand, seems something of a stretch at 16 teams, still relying on double-headers to inflate its attendances. "No one's showing up early to watch Bermuda v Nicaragua," a friend texted me the other day. And no one's pretending that 52,874 people watched Cuba play Martinique in Denver on June 19.

I suggested in a column about 15 years ago that the Americas should merge confederations and stage a 16-team north, south and central American tournament every four years. A fellow journalist countered with the fair point that the Gold Cup was a nascent competition and should be allowed the time to grow. That may yet happen, but it still looks to me more like a Concacaf cash-cow than a serious and particularly watchable competition. And that will not change as long as so many Central American and Caribbean countries continue to suffer from rank poverty and shocking disparities in wealth - both internally and by comparison with North America.

All this, and I haven't even mentioned FIFA's moronic plan to expand the World Cup from 32 teams to 48. It's barely worth discussing, because outside of FIFA I've yet to meet a single person who thinks this is the splendid idea that Gianni Infantino has claimed it to be. The justification is pseudo-democratic -- the more teams we have, the more we grow the game across the world. Like soccer is losing in a global popularity contest to golf and croquet.

And yet, applied to the Women's World Cup, this argument has some legs. In countries such as the aforementioned Cameroon, Nigeria and Argentina, the game needs all the support that it can get. Participating in France 2019 will hopefully have aided such countries' claims for more material support from their male-dominated FAs. Maybe someone at the Thailand FA said after their 13-0 defeat to the USA, "Let's avoid that happening again and give our women's team some serious backing." Possibly other countries that did not qualify took a look at this burgeoning tournament and pledged to get behind their women's program with the future aim of also taking part.

"We showed the world that we have a team that's improved a lot," said Nigeria's coach Thomas Dennerby after his team's elimination by Germany in the round of 16. "Overall, we came out with a good performance, but also learnt from the smaller mistakes [that lead to defeats]. It's going the right way."

For emergent soccer nations, taking part and gaining the experience can be as important as the actual results. For that reason alone, 24 teams at France 2019 has been a good thing. Before long, the quality will be there to raise the number of participant countries to 32, and to keep it there as well.