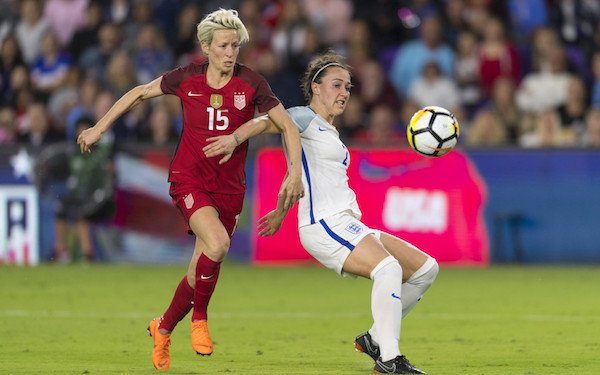 If Megan Rapinoe doesn't win the 2019 Ballon d'Or as the best women's player in the world, it will be because someone knocks off the USA in Lyon.

If England does it on Tuesday night at the Groupama Stadium, right back Lucy Bronze will jump to the top of the list.

Well, England coach Phil Neville has already put her there.

“She should win the Ballon d’Or,” Neville said after Bronze had a goal and an assist in the 3-0 win over Norway in the quarterfinals. “She’s the best player in the world.”

Bronze, who played on the 2009 University of North Carolina championship team in her one season with the Tar Heels, isn't convinced.

“It’s a lovely compliment to receive," she says, "although I don’t believe him.”

Bronze's Lyon teammate, Ada Hegerberg, won the first Ballon d'Or in 2018 and scored a hat trick when Lyon beat Barcelona, 4-1, in the 2019 Women's UEFA Champions League final. But Hegerberg's decision to not play for Norway at the 2019 Women's World Cup has opened the door for another player to step forward on the world stage.

Bronze says the best player is her friend and teammate, Dzsenifer Marozsan, but she was injured and missed most of the World Cup before Germany was upset by Sweden in the quarterfinals.

The Rapinoe-Bronze duel will be the best single matchup at the World Cup -- the American left winger vs. the English right back. For England to win, Bronze will have to push into attack, like she did against Norway when she combined with future Lyon teammate, Nikita Parris, and they had a field day down the English right side.

Bronze says she's adapted as the tournament has gone along.

“My game’s been a little bit different every game,” she said. “But I don’t think Phil will ever be able to keep me still and stood on the half way line. That’s just not me. For me, I’ll play the normal game that I always want to play, full of energy, joining in attacks, joining in defense, and working hard for the team.”

Neville won't commit to Bronze having to defend against Rapinoe though he said there would be no better matchup in the world.

"It might be Rachel Daly against Megan Rapinoe," he said of former St. John's star who now plays for the Houston Dash. "You just never know. We have a decision to make."