The USA has reached the Women's World Cup final for the third straight time thanks to a 2-1 semifinal win over England. Christen Press, who replaced an injured Megan Rapinoe in the starting lineup, scored in the 10th minute and center forward Alex Morgan, who hadn't hit the net since the tournament opening win over Thailand, scored the gamewinner in the 31st minute. Both U.S. goals came on headers. On Sunday, the USA will play either the Netherlands or Sweden. A win would earn the USA its second straight World Cup title and give the USA its fourth of the eight Women's World Cup titles since the tournament's inception in 1991. 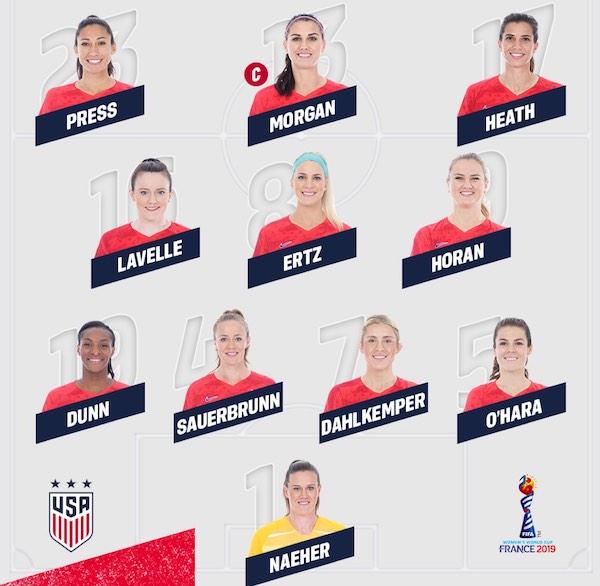 Alyssa Naeher made a diving save on Keira Walsh's driven shot from 26 yards in the 33rd minute and saved Stephanie Houghton's 84th-minute penalty kick.

Right back Kelley O'Hara sent a cross in from near the corner flag that met Christen Press at the far edge of the goal area on the first goal. O'Hara also won most of her one-on-one battles defensively. Beth Mead's cross to Ellen White was near impossible for O'Hara to block and was also struck so well -- low and hard -- that it flew just out of reach of Abby Dahlkemper. Becky Sauerbrunn's foul on the Ellen White was a slight clip that needed a VAR review but could have been avoided. The USA's winning goal came after Dahlkemper struck a long cross-field ball perfectly to Press' feet on the left wing. Dahlkemper and Sauerbrunn was lucky that VAR spotted White offside by inches when she darted between them and finished in the 67th minute. Crystal Dunn battled Rachael Daly and Lucy Bronze and ultimately prevented them from creating chances.

Starting strong has been the U.S. recipe at this World Cup and on Tuesday Rose Lavelle's dynamic play gave the USA a significant edge in the first half, during which the USA took nine of its 10 shots. In the 4th minute, Lavelle nutmegged Millie Bright and unleashed a shot blocked by keeper Carly Telford that created a chance for Alex Morgan, who shot high. Lindsay Horan lofted in the ball that Alex Morgan headed in for the gamewinner and Horan's ball-winning in the midfield disrupted much of England's play. Julie Ertz helped create attacks in the first-half but focused mostly on defense in the second half.

Tobin Heath sent a well-timed defense-splitting ball to O'Hara on the first goal. Christen Press headed perfectly to make it 1-0, and controlled Dahlkemper's long pass before feeding Horan crisply ahead of Alex Morgan's game-winning goal. The English resorted to fouls four times to stop Morgan, including two by Millie Bright, who was ejected in the 86th minute for her second.

Sam Mewis came in for the last 25 minutes for Lavelle mainly to help harass England in the midfield. 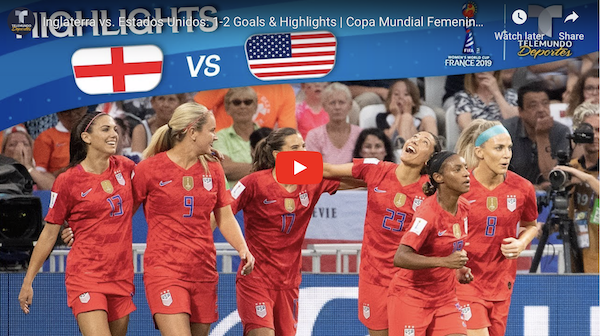