It took a thunderstorm to stop the USA after it started the Gold Cup semifinal playing its most impressive, well-tuned attacking soccer of the Gregg Berhalter era. After a quarter-hour of relentless and varied attacks during which outstanding goalkeeping kept the USA lead at 1-0 -- the game was delayed for 88 minutes because of lightning in the Tennessee sky. The Reggae Boyz regained some composure after the long break, which benefited the game by creating end-to-end action. But the Americans maintained the upper hand on the way to a 3-1 victory. The USA faces Mexico in the Gold Cup final on Sunday.

Zack Steffen delivered a ball to Jozy Altidore that help spark an early U.S. attack. Steffen made a diving save on Junior Flemmings' 25-yard shot in the 22nd minute and snatched a cross in the crowd late in the second half.

Both outside backs contributed the USA's attacking game. Right back Reggie Cannon went way down the wing to receive Michael Bradley's pass and side-foot volley it to Weston McKennie to set up the 1-0 goal. Left back Tim Ream supported and fed Christian Pulisic and Paul Arriola. Matt Miazga stifled Junior Flemmings when Jamaica gained momentum after the weather delay. But Miazga let his guard down while marking Shamar Nicholson when he headed into the U.S. net from eight yards. Aaron Long handled his defensive duties and managed a couple shots on goal at the other end.

The USA's early waves of attack began when Christian Pulisic stormed into the penalty area from the left in the 1st minute, beat two Reggae Boyz, and struck a pass that bounced off Jozy Altidore's thigh. Pulisic, whose 12th-minute free kick was brilliantly saved by keeper Andre Blake, looked dangerous nearly every time he got on the ball. He pounced alertly and struck with composure to score twice on rebounds. In the buildup to his second goal, Pulisic evaded three Jamaicans to feed Arriola. Weston McKennie scored the USA's first goal and sent a excellent pass through the middle to Jordan Morris to set up the shot that Blake rebounded to Pulisic on the second U.S. goal. Michael Bradley did his usual defensive work but also a considerable amount of offensive play-making. His connection to McKennie and Pulisic was better than ever. And Bradley hit the the precise pass from near the center circle to Cannon on the wing that help set up the USA's first goal.

Paul Arriola coordinated well with Pulisic, allowing Pulisic to move into the frontline frequently. Especially in the second half, when Arriola was usually behind Pulisic. The partnership peaked when Pulisic finished the rebound of Arriola's shot to make it 3-1 in the 87th minute after Pulisic fed Arriola. In the fourth minute, Jordan Morris stroked an inviting pass into path of Arriola, whose close-range shot was heroically smothered by Blake. Jozy Altidore was credited for an assist on McKennie's goal although what mattered most was that his attempt to connect with Cannon's pass didn't change its path. Altidore failed to get a shot on goal, but he did occupy the Jamaican central defense, and joined in when the U.S. pressured.

Gyasi Zardes horribly mis-hit on a prime chance within a minute of replacing Altidore when McKennie sent him in alone on Blake. Jamaica exploited Zardes' giveaway in the U.S. half on the way to scoring its goal.

TRIVIA. The average age of the USA's starting lineup was 25 years, 171 days. 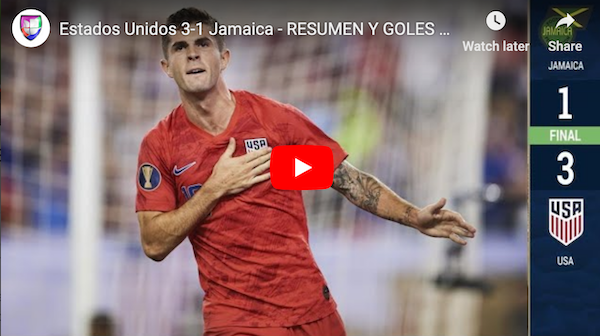