Charlie Slagle  switched from football to soccer at age 21, then dedicated the rest of his life to the sport. 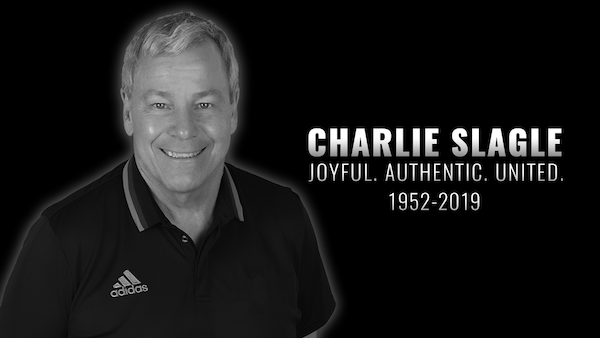 He attended Davidson College in North Carolina in the mid-1970s on a partial football scholarship, but after his sophomore season, he and the Wildcats football coach disagreed about Slagle's role on field. He started kicking around with the soccer team and enjoyed it so much he said goodbye to the oval ball.

The late introduction to soccer limited Slagle's chances in the field, but he had "good hands" and became the Wildcats' goalkeeper during his final two years of college, earning All-Southern Conference honors. "I fell in love with the game," he said.

Five years after graduating, Slagle became Davidson's head coach, a position he would hold for 21 seasons (1980-2000), compiling 209 wins and seven Conference Coach of the Year Awards. It was in 1992 when Slagle and Davidson College entered the college soccer national limelight.

Slagle, believing that the men's NCAA Division I soccer championship was falling short of its potential, spearheaded Davidson's bid to host the final four. In 1991, the men's final in Tampa Bay drew a crowd of 3,889.

Davidson College at the time had a student body of 1,500. The city of Davidson, 30 miles north of Charlotte, had a population of slightly more than 4,000 in 1990. Its men's soccer team had never even reached the NCAA tournament. But Slagle convinced the NCAA that Davidson could take the event to a higher level.

When the final four took place at Richardson Stadium, defending champion Virginia, Duke, the University of San Diego -- and the Slagle-coached Davidson Wildcats made it to the semifinals. Both game days were sellouts of 8,150. The Claudio Reyna-led Virginia Cavaliers won the title, and repeated twice more at Davidson College, which added seats to enable final crowds of 10,549 and 12,033 in 1993 and 1994, respectively. (Last year's College Cup final hosted by UC Santa Barbara drew 4,858.)

“Charlie was one of the true renaissance men of our game," said United Soccer Coaches CEO Lynn Berling-Manuel. "Coach, executive, teacher, author, broadcaster, entrepreneur, but what he liked to call himself first and foremost was ‘Promoter,' He lived to Promote soccer with a capital P! The College Cups he hosted at Davidson College are still remembered as the most exciting events in virtually all of college soccer history, nothing ever surpassed them for true college soccer atmosphere."

Slagle was named College Coach of the Year in 1992, when the Wildcats' Rob Ukrop led the nation with 31 goals and 10 assists. After leaving his position at Davidson, Slagle served as the CEO of the Capital Area Soccer League (CASL) in Raleigh, North Carolina for more than 12 years. His role with CASL included organizing 11 more College Cups, and hosting training camps for the U.S. men’s national team before the 2002 and 2006 World Cups. He also served as executive director of Colorado Rapids Youth Soccer and Tampa Bay United Soccer Club’s CEO.

Last January, he became Vice President of Community Engagement and Gameday Experience for the Richmond Kickers, where he reunited with Ukrop.

“We are saddened by coach Slagle’s sudden passing,” said Ukrop, Richmond Kickers Pro Chairman. “He was a terrific man who loved his children, Barry and Amelia, his granddaughter Clara, and the soccer community at large. He made an immediate impact on the RVA community by sharing his time and talent running coaching clinics and camps. Most importantly, he was an incredible friend to our staff and a joyful and authentic leader. We will miss Coach and strive to continue his powerful legacy of serving others.”

Slagle served as the President of United Soccer Coaches (previously known as the NSCAA) in 2017, was on its Board of Directors for six years, and had a stint Vice President of Education. Slagle also contributed articles to Soccer America's Youth Soccer Insider. Last year he published the book, "Soccer Smarts: 75 Skills, Tactics & Mental Exercises to Improve Your Game."

“Charlie was a force of nature,” said Kickers president and general manager Matt Spear, who captained Davidson's 1992 team. “What was so powerful about Charlie is that he never met a stranger — he loved people and his energy was infectious."

Slagle died on Tuesday in Richmond at the age of 67.